By Contributor June 28, 2009 in Arts & Entertainment, The Melting Pot 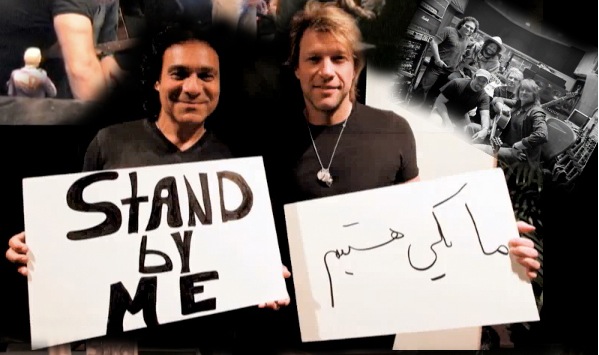 Popular Iranian-Armenian singer Andy Madadian joined the likes of Jon Bon Jovi, Richie Sambora and record producers Don Was and John Shanks on June 24 to record a special version of the Ben E. King classic “Stand By Me” with lyrics in English and Farsi as a a musical message of worldwide solidarity with the people of Iran.

The sole intent of the song  is to be downloaded and shared with the Iranian people, “To give voice to the sentiment that all people of the world stand together,” says the message on MyDamnChannel, the website created to empower comedians, musicians and filmmakers to produce and distribute original videos that is hosting the collaboration between Andy, Bon Jovi and Sambora.

The song is in response to the now 2 week-old protests taking place in the capital of Tehran and various other Iranian cities that initially started out as a protest against a rigged election where current president Mahmoud Ahmedinejad was declared the winner but soon became a call for a change after a 30-year fundamentalist Islamic regime where human and women’s rights were abused.

Although Armenian, Andy has been a fixture on the Iranian music scene since the 80s. Andy joined Kouros in the late 80s and the two went on to release four successful albums until the duo split in 1992. Andy has been awarded the “Best Armenian International Singer” four times and is known as the “King of Pop” in Iran. His 2006 album, “City of Angels” won Best International Armenian Album at the Armenian Music Awards.

On July 21st, 2009, he will be performing at the half-time show during the Chelsea FC vs Inter Milan game at the Rose Bowl, a performance in which he canceled his tour for. Andy released his first Armenian language album, “Orere Seero” in 2003.

Singer Jon Bon Jovi and guitarist Richie Sambora form half of American rock band “Bon Jovi,” which has sold over 120 million albums worldwide and inducted into the UK Music Hall of Fame in 2006. Their 2008 “Lost Highway” tour generated $252 million in ticket sales and the band was the topic of the documentary, “When We Were Beautiful.” Current members also include David Bryan on keyboards and Tico Torres on drums and percussion.

A free download of the song is available here.