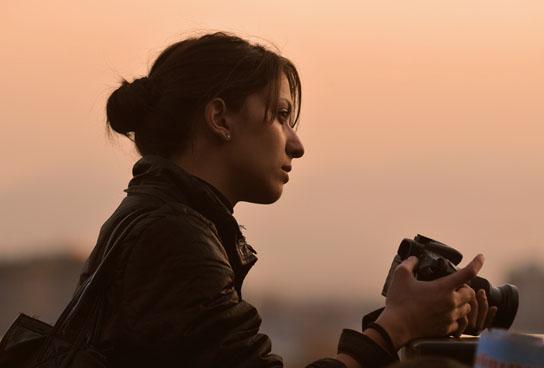 Ani Gevorgyan,  a young journalist in Armenia was arrested on May 31 while covering an act of resistance initiated by young activists of the Armenian National Congress (HAK), according to a statement put out today by her employer, The Armenian Times or Haykakan Zhamanak by email and posted subsequently online.

Gevorgyan was covering the protest in Liberty Square in Yerevan when  she was arrested and later charged with “violence against a State representative.”

No details or evidence has been yet provided by police regarding the alleged violence by the 23-year-old journalist against the police, the statement said.

Suzanna Poghosyan and Lilit Tadevosyan, two other journalists were also taken to the police department during the same protest, however they were both released the same day. Poghosyan is from Haykakan Zhamanak and Tadevosyan from Hayq daily.

Ani’s brother Sargis and opposition activist Davit Kiramijian were also detained, according to a report by Radio Free Europe/Radio Liberty, which also mentioned a written statement in which Armenian police defended their use of force by alleging the assault of riot police in Yerevan. The statement gave no reason for Gevorgyan’s arrest. RFE also reported that the Special Investigative Service has taken over the case, but refused to say whether it will press charges against Gevorgyan.

While the reasons she was detain remain unclear, the editorial staff of Haykakan Zhamanak believes Gevorgyan’s arrest was an act of revenge by Alik Sargsyan, the national police chief. Gevorgyan had published two articles that covered the production of a video clip devoted to the police and revealed fraud related to the production of the clip, the statement continued.

This sentiment was echoed  by tzitzernak2, a blog covering human rights issues in Armenia:

Now, why would the RA police and red berets and the rest of that posse (since they are exactly that, a posse) want to persecute this young woman? Just take a look at her recent writings – in addition to working for HZH, a strongly pro-opposition newspaper, whose editor-in-chief is Nikol Pashinyan – she has been writing about Alik Sargsyan, and the RA police. Most recently she commented on just how similar the video for the RA police is to the video for the Georgian police.

Armenian Times is demanding that the police and authorities of Armenia immediately release Gevoryan and stop criminal persecution against her and “bring to justice the police officers who exceeded their powers.” The staff of one of the most widely circulated newspapers in Armenia also said that her arrest is a violation of the Article 4 in the Law of the Republic of Armenian which guarantees freedom of speech in the sphere of the media. The staff’s statement also referenced  Article 164 of the Criminal Code of the Republic of Armenia which says that “obstructing lawful professional activities of a journalist or forcing the journalist to disseminate or not to disseminate information is punished with with a fine, while if an official is found to be abusing his or her official position, a fine as well as imprisonment for a term up to three years might apply.

Armenian law states that the police have 72 hours to formally charge arrested suspects or otherwise set them free.

While the Committee to Protect Journalists recently welcomed a move by Armenia’s parliament to decriminalize defamation, the post-Soviet country has been cited in recent years for attacks on the press by CPJ, most recently in 2009, where top developments included inaction by police on assaults on journalists that were reported.

Update: CPJ has released a statement on Gevorgyan’s detainment. “Based on the video and accounts provided by her editor, we’re deeply skeptical of the police allegations against Ani Gevorgian. The evidence indicates that she was at the rally doing her job,” said CPJ Executive Director Joel Simon. “We join with our Armenian colleagues in calling for Gevorgian’s release.”

Update: Hetq reports Gevorgyan and her brother have been released by a court decision, providing they do not leave Yerevan prior to a final decision on the case.

Update: “The police were constantly stopping me from doing my job at Freedom Square,” Gevorgyan said to Armenia news outlet A1+. “They were not letting me take photos, moving my camera, hitting my legs, my back, cursing in order to stop me from taking photos.”

Update: After Armenian Police released a video alleging Gevorgyan swiped an officer’s hat during the protest, Tzitzernak has posted screen shots of the video which show discrepancies in the swiper’s clothing that do not match Gevorgyan’s red shirt. The video also does not have a date. “It seems to me the police went back over their videos and tried to look for something, anything, to charge her on,” the blogger says.

This page will be updated as more information comes in.