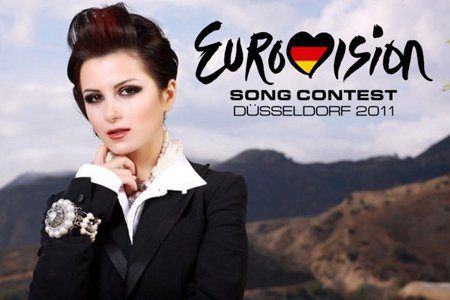 After an evenly divided vote by an expert jury and televoting by citizens, Armenia chose “Boom Boom” as the song to send with Emmy to the 2011 Eurovision Song Contest in Germany, much to the dismay of fans everywhere, who have  since expressed their disappointment and frustration with the choice through several social networks and have even set up a Facebook page called “We don’t want Boom Boom to Eurovision.”

Written by members of the band Apricota Hayk Harutyunyan and Hayk Hovhannisyan and with lyrics by Sosi Khanikyan, “Boom Boom” is an up-tempo song with, you guessed it, lyrics that go “boom-boom chaka chaka/your love is a like-a like-a.” It faced competition against “Hi,” “Goodbye,” and fan favorite “Ayo,” with music and lyrics by Canadian-Armenian producer DerHova who also wrote Armenia’s 2008 entry “Qele, Qele,” which reached Armenia’s highest rank at 4th place.

Unzipped blog, which always provides thorough coverage and commentary on Armenia’s Eurovision selections year after year was more than  disheartened about Armenia’s song choice in an entry titled
“Major fail for Armenia in Eurovision. Emmy was robbed of her Eurovision song.”

I was shocked, along with all of my friends who were following the selection process. I felt embarrassed. In fact, “embarrassment” is an understatement re Armenia Eurovision song selection. It was a major fail. What has happened to the taste of mainstream public voters and jury? Rhetorical question, I know…

PanArmenian.net reports that a fan statement addressed to the media outlet said the selection didn’t match the results of SMS voting, which had “Ayo” leading and alleged that “Boom Boom” is a plagiarized version of a song performed by Russian singer Jasmin.

Fans took to Twitter as well, expressing their anger with the song:

While Eurovision, which has been broadcast since 1956 hasn’t exactly earned the reputation of being a serious high-class singing competition, where a group of Finnish hard rock loving monsters took home the 2006 title and Ireland preceded to enter a singing Turkey in 2008’s competition, Armenia’s “Boom Boom” could possibly end up being a hit – but we’ll have to wait until May to see it all unfold (viewers outside of the country’s being represented can watch all the action, including the semi-finals on Eurovision’s ESCTV player). To be fair, “Boom Boom” hasn’t yet received the kind of criticism Inga & Anush’s 2009 entry, “Jan Jan” did in circles beyond Armenia, which earned a spot on a list of ridiculous Eurovision entries.

Eurovision enthusiasts in Armenia are making an effort to see if they can change the song before the official competition by picketing in front of Public TV on March 9, reports Unzipped. The song received a flurry comments on its official Eurovision page, causing administrators to disable comments because they violated the site’s Terms of Use, which includes refraining from defamatory, abusive, vulgar, harmful, obscene and profane content.

Watch Emmy’s performance of “Boom Boom” and “Ayo” below.

The Big Picture: In Armenia, a History of Faith Part II