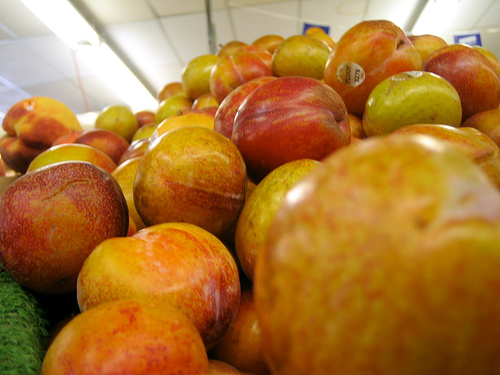 fruit is an essential part of raw vegansim, a diet followed by 90-year-old ex-POW Vaghe Danielyan of Armenia/by Liana Aghajanian

He’s an ex-prisoner of war, hasn’t seen a doctor in 40 years and recently crossed over to his 90s, but raw vegan Vaghe Danielyan is as strong as ever.

The nonagenarian who switched to a raw vegan diet after his wife Nina handed him the book “Raw Foodism,” by fellow Armenian Arshavir Ter-Avanesyan in 1963 lectures on raw vegansim in Russia, pens columns in the Armenian press and does yoga and runs daily, according to a report publishing in the Global Post by journalists Nataliya Lozhkova and M. Comins:

Since his conversion 47 years ago, Danielyan has eaten only raw vegetables, fruits and grains, while lecturing on raw veganism in Russia and penning columns in the Armenian press. He also does yoga and runs daily.

Like many raw vegans, Danielyan believes his diet is a panacea to many of today’s illnesses. He claims that cooked foods contain toxins that cause chronic disease. “I haven’t seen a doctor in over 45 years,” Danielyan said.

Some doctors concur, stating that raw veganism does wonders after five or more years. However, little research has been done on the subject and scientists are divided on the diet’s actual benefits.

Danielyan recounts his transformation as weight loss followed by “internal cleansing.” Ceasing to ingest toxins from cooked foods, he said, the body begins to excrete stored poisons through the skin and the intestines.

“First, I lost my extra weight,” he said. “Then my body started cleansing itself. I had all these pimples and rashes. But I was glad, because I knew my body was nursing itself back to health.”

Danielyan’s diet also gave him newfound energy. “I woke up and felt like I could fly,” he said. “I felt like I had to run.” Even today, Danielyan still runs two miles per day, half of his previous average.

While vegetarian or vegan statistics in the South Caucasus don’t exist, the number of people who follow plant-based diets are few and far in between in a region where meat is an integral part of the diet and culture. In the U.S.,  7.3 million follow a vegetarian-based diet, with 1 million of those being vegan according to a study conducting by the Vegetarian Times. In the United Kingdom, three percent of 3,000 people surveyed were found to be completely vegetarian according to a Vegetarian Society 2009 survey.

Arshavir Ter Hovannessian, the Armenian-Iranian author of “Raw-eating, or, A New world free from diseases, vices and poisons”   is incorrectly referred to as Arshavir Ter-Avanesyan in the Global Post’s version.  The first part of the book was published in 1962, writes Hovannessian (frequently referred to as “Aterhov”) in a preface of the 2nd edition.

“The most ignorant person can clearly perceive that, instead of freeing people from disease, the medical science that is based on cooked foods and poisonous drugs leads mankind into a multitude of serious ailments, from which all other living creatures are immune,” he continued.

“I appeal to all true humanitarians to raise their voice and by their continual demands invite the authorities to take immediate steps to put the principle of raw-eating into practice. The time is ripe for action.”

Danielyan, who is Armenia’s oldest runner  still dreams of sailing the world hopes to help as many people he can to live healthy lives.