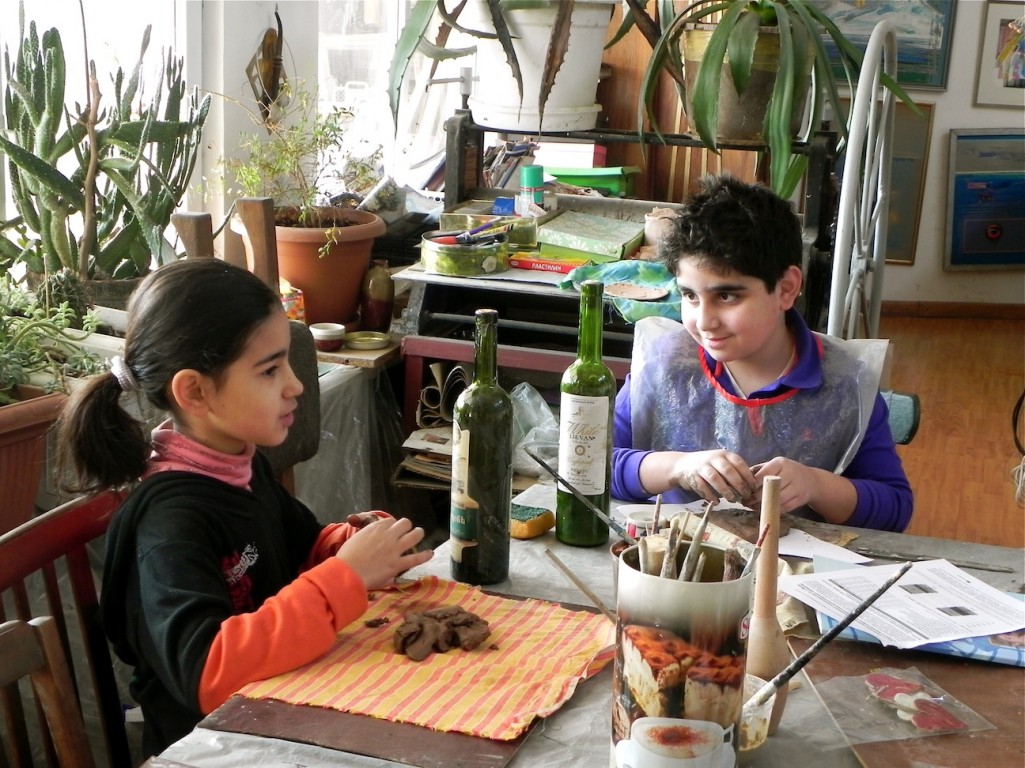 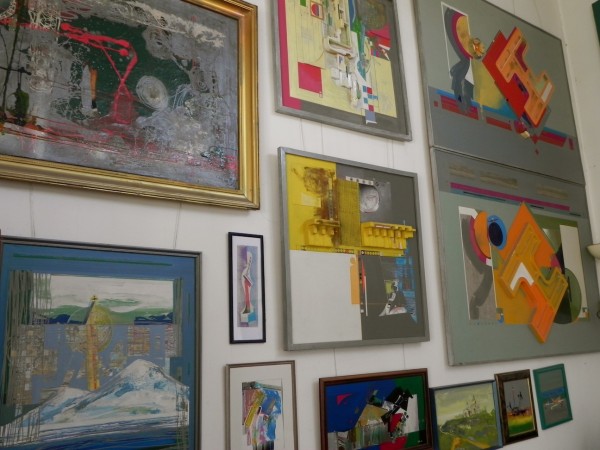 It’s just after noon on a cloudy but bright December day, and the cold, grey-white sunshine pours through large windows overlooking a cluster of apartment buildings neighboring Yerevan’s Matenadaran ancient manuscript repository. Vivid, abstract paintings and three-dimensional creations adorn the high walls of this room and the dark wooden hallway I passed through to reach the fifth-floor home and art studio of Armina Baghdasaryan.

While the only thing keeping the inside temperature from matching that of the outside air is a small furnace near the door, the space reverberates with life as Baghdasaryan cheerfully rushes around serving tea and cookies; distributing aprons, tools, and lumps of clay; alternating between Armenian, French, and English as she encourages her young students – already busy rolling, pounding, cutting, and shaping.

Baghdasaryan is the daughter of Arkadi “Arko” Baghdasaryan, one of Armenia’s first and most respected modern artists. In fact, the amazing works that adorn nearly every square inch of wall space – and a significant amount of floor and desk space – are his. Growing up, Baghdasaryan was immersed in art and music. Her dissident father, whose non-traditional artwork was considered nonsense to the Soviet way of thinking, listened to the barely-audible “Voice of America” radio program in secret, exposing his family to the English language and American music, including Baghdasaryan’s favorites, Louis Armstrong and Ella Fitzgerald. 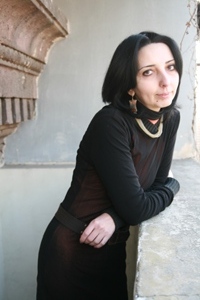 Armina Baghdasaryan is bridging culture through the art of ceramics/ courtesy A. Badghdasaryan

In 1997, during her last year as a student, she went to Paris with her father to set up an exhibit for his work. They stayed in a historic artists’ residence, and she learned French during her time there, particularly through cinema and theater. It was there that she developed a fascination for linguistics, and when she returned to Armenia, she started a foundation for Joie de Lire (Joy of Reading), a library of French-published children’s books.

But after a few years  she returned to France to study sculpture,  surprising her family in the process. While taking ceramics classes, she stumbled upon a new idea:  she could teach language and pottery simultaneously – children could learn the French language through art.

After studying for a few years in Warsaw after France, she came home to Armenia and worked at the Armenian Center for Contemporary Experimental Art (also known by its Armenian acronym, NPAK) from 2008 to 2010 on new techniques for teaching French through author projects, games, modeling clay, and even kamishibai, a 12th-century Japanese method of illustration-based storytelling.

Now Baghdasaryan is married with three creative daughters of her own: Dana, 14, an art student studying painting; Sophia, 11, a ballerina and hopeful choreographer; and 9-year-old Mariam, who is sitting at the table, skillfully forming adorable clay hedgehogs during my visit. 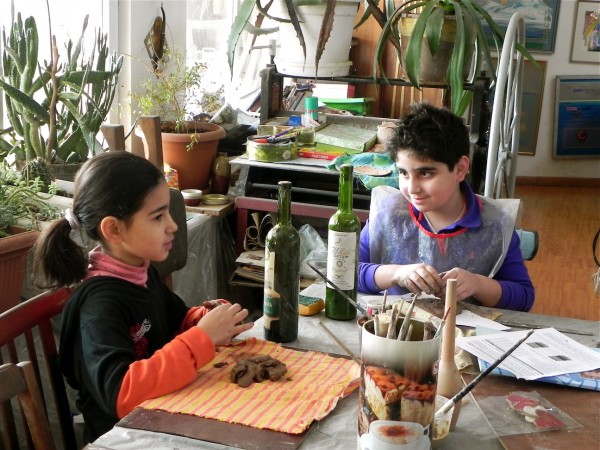 Seated nearby are Maria, 8,  painting a teacup she made last week; Sarkis, 6, decorating a tiny clay Christmas tree; Ruben, an impressively independent 10-year-old who speaks Armenian, Russian, Hebrew and French; and a few other aspiring young potters.

Every weekend, these kids are here, getting their hands dirty and sculpting to their hearts’ content under the supervision of their enthusiastic instructor, who sees symbolic meaning in their work.

“The thing that I like [about] working with kids is that they have a very rich vision, they like to improvise and I am able to understand and help them to receive what they want, ” Baghdasaryan says.  She sings “Frère Jaques” and “Allouette,” and helps 4-year-old Nathan count how many little feet he should make for his clay cat, “Un, deux, trios, quatre!” 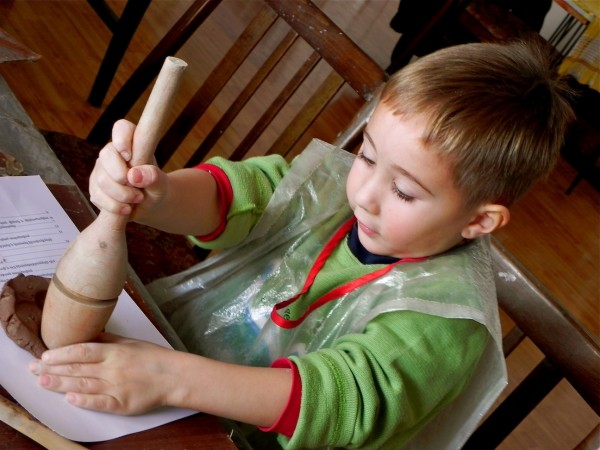 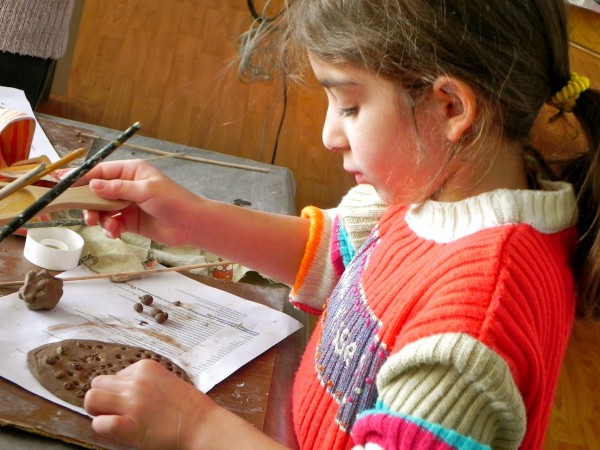 6 year-old Sabina. When I asked her what she was making, she smiled and replied, "I don't know!"/by Victoria Rovira Infante

Suddenly, in this definitive moment, I realize the incredible goal Baghdasaryan is achieving: by devoting her abundant energy to her three passions – language, art and children – she is building a bridge. It is one many have tried to build before, though not all who have attempted to do so have been successful. Hers is a beautifully subtle, yet solid, communicative link between cultures and generations, one that will last for years to come.