By Contributor May 28, 2010 in Arts & Entertainment, Commentary 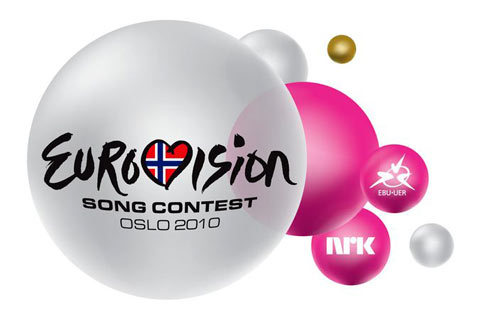 It’s a shame that most Americans don’t know about the most glorious singing contest in the world that outshines franchises like American Idol and X Factor by a million sequined outfits and shiny gold suits : Eurovision.

With two semi-finals this week reducing the 39 countries participating in the May 29th final in Oslo to 25, many countries gave memorable performances, but let’s face it – you’re not watching Eurovision because of how good these singers are, you’re watching because how awesomely bad they are, well at least I am.

Sure, you could argue that this 55-year-old competition has given birth to music greats like Celine Dion and my personal favorite ABBA, but Eurovision has always in some format, come to represent the best of the worst in all their glittery glory. Plus, as far as I’m convinced, anything coming out of Sweden is solid gold (Pippi Longstocking, IKEA, H&M, Swedish Fish, Alexander Skarsgård, lingonberry jam).

The 2010 Eurovision semi-finals had so much cheese, it was hard to swallow. But that’s what makes this competition so great. Don’t misunderstand me, it’s the type of cheese I love, it goes down smooth, has a rich taste and lingers on your taste buds for hours. In short, it’s absolutely delicious. There are only a few things I demand from a good Eurovision entry – a great shiny outfit, an upbeat tune that I can see myself dancing to drunk or sober and as much energy you can fit on the stage. This is more or less why the following countries will have a place in my heart, whether or not they win.

Let me start out by saying this: any time you combine Mediterranean hunky men with scantily clad outfits, choreography and the phrase “Opa” you’ve got a winner. Giorgos Alkaios and his “friends” take the song head on,  which is entirely in Greek. With lyrics like “I will change everything” and “let bygones be bygones, let’s start all over again – OPA!” the song has a deeper meaning, especially with the current economic uncertainty in the world, and most particularly the troubles plaguing Greece. “I think Greek people want to say an ‘Opa’ and get out and you know, break a plate,” Alkaios said in an esctoday.com interview. Greece’s entry in Eurovision is so good, it should be played twice during the finals. The only thing that would make it better would be a white to black outfit change akin to their official video. You’ve done well, Greece. Opa! 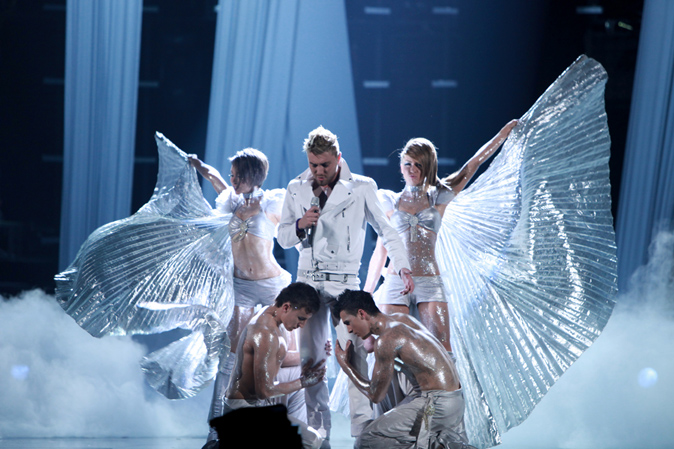 Miro, also known as Miroslav Kastadinov is the epitome of Eastern European bad pop music, making his entry of “Angel Si Ti,” or “You’re an Angel” perfect for Eurovision. Like Greece, Bulgaria’s entry doesn’t contain any English, which I can really appreciate. I hear English songs all day long, so a little culture coming through earns bonus points from me. Liking “Angel Si Ti” for the lyrics is pointless, since more than half the song is Miro singing “Oh, Oh, Oh,” set to a synthasized beat. The beautiful thing about Bulgaria’s entry is they know to bring it when it comes to the on stage theatrical performance. In the second Eurovision semi-final, Miro was accompanied by men who were soaked in so much baby oil I was afraid they were going to slide off the stage and into the audience and women with silver angel wings. 12 points from me!

I will be the first to say that rock bands don’t really draw any praise from me in Eurovision and that still rings true, with the exception of Turkish rock band maNga. Although some commented on maNga being the Turkish System of a Down, I think they’re much better. I’m not a fan of System of a Down, Armenian or not. So sue me. Their song, “We Could Be the Same” is a melodic, rock infused love song that would be perfect for a Turkish-Armenian love story. A sample of their lyrics proves that:

MaNga, who have won awards from MTV Turkey as well as the MTV Europe Music Awards may have the most potential to succeed after this hulabaloo is over, although they do need some help in the wardrobe department. Lead sing ( ) looked like a deranged pilgrim from Plymouth Rock, while his band mates needed to lay off the Emo makeup and just be themselves. 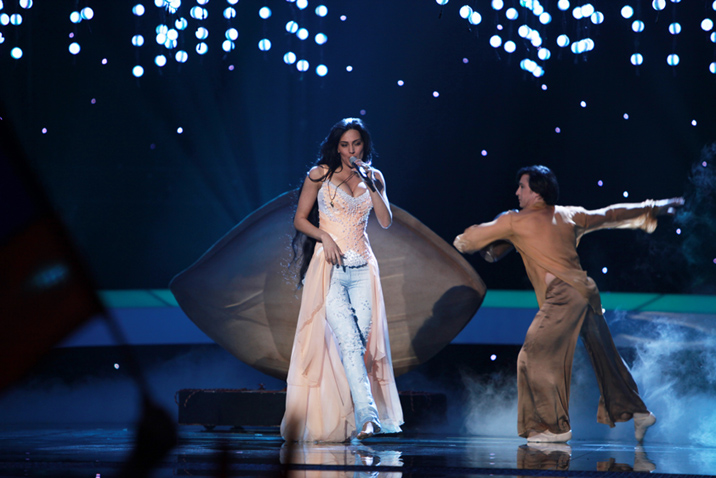 I suppose it’s a given that I have to include Armenia and critique it, after all, she represents what I naturally know the most about. Let’s start with Eva Rivas. Yes, she’s a beautiful, towering goddess, but I would love nothing more than to give her a makeover. Excuse me while I talk to Eva, girl to girl. First order of business? Cut off your hair. You are not Rapunzel. There is no other way to put it: it looks bad, and damaged, and bad. Next, I don’t know if you know this Eva, but you are on stage. In front of millions. Would it kill you to put on some makeup? I’m a believer in the philosophy of less is more, but girl, you’re on television, Pile it on. Pile. it. on. Take some tips from Kim Kardashian, she puts more than enough makeup on for the both of you. And don’t get me started on your outfit. White pants? Really? Do you not have stylists? You also really squeezed those apricot stones pretty snuggly in that bustier you had on, perhaps that’s why you lost your voice at the end. Please don’t suffocate your breasts for the final. Get rid of those background dancers, especially that one guy who was fluttering around on stage holding pottery. You don’t need them and they’re really harming your performance instead of enhancing it. Jivan can stay because he’s amazing, and it’s a shame he wasn’t utilized more in this song. Your lyrics are atrocious – judging by the vast available Armenian networks all over the world available to you, would it have killed your team to at least just run them by someone who is versed in English language and grammar? You could have even emailed it to me, I would have gladly taken a look. Despite all this, I think you have a real chance here with your catchy song to place really high in the competition, so good luck. And cut off your hair.

Glass piano with red glowing keys? Check. Catchy infectious dance music? Check.  Duet with two Eastern European pop stars dressed in pleather? Check Pyrotechnics and backup dancers? Check. Romania, you’ve got yourself a winner. Unlike Armenia, Romania made sure to get their understanding of the English language right, even if their lyrics seem like 80s American pop. “You and me can’t you see, we’re playing with fire,” sing Ovi and Paula Seling, who has won an MTV Romania Music Award for Best Artist in a Video in 2002.  Romania’s entry makes me feel like being in a club in Bratislava with a sequined tiny top on and flowing absinthe every where. Yes, I’ve seen Eurotrip too many times. There’s nothing else to say about this entry really, because there’s nothing that I would change. A+ 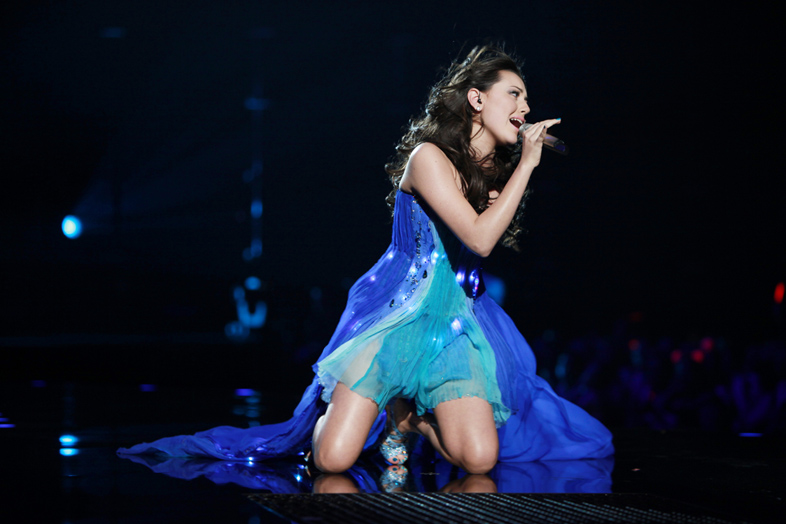 Safura Alizadeh’s slick and smooth love ballad is too Westernized for my taste, but I do have to give her credit for pulling out every single gimmick that makes Eurovision so special. From the sparkly outfit, to the bad lyrics (You smell like lipstick again, come on, answer my question!) to the choreography and the dramatics, I smell a winner. This 17-year-old who has expressed interest in having English heartthrob Robert Pattinson appearing in one of her videos (good luck with that)  is definitely a show stopper. Unlike Armenia, her personal style and appearance, at least at the semi-finals was pretty flawless, although I’m not sure how I feel about her “edgy” blue glittery glove. While Safura is a favorite to win this year’s Eurovision, her video is on its own, an amazing gem that’s worth a watch. Once you listen, it takes quite a while to get “Drip Drop” out of your head.

Because Albania’s song, “It’s All About You” makes me want to immediately get up and dance, I’m going to forgive the fact that it’s not in Albanian. It was originally written in the country’s native language, but changed to English for the competition. Juliana Pasha’s space cadet outfit and hair in the semi-finals received my stamp of approval as did the violin solo in the song. She kept it simple, no props or backup dancers and black outfit with a touch of sparkle, bringing a welcome touch of class to a sometimes classless competition.  Her backup singers also looked stunning and complimented her voice brilliantly. Although I would have preferred her song to have more girl power to align with her stage presence, “It’s All About You” is a solid hit for Eurovision.

So there you have it. See you at the glorious finals on Saturday, May 29 at 12 p.m. PST. You can watch it here.