By Contributor March 13, 2010 in Diaspora, Features 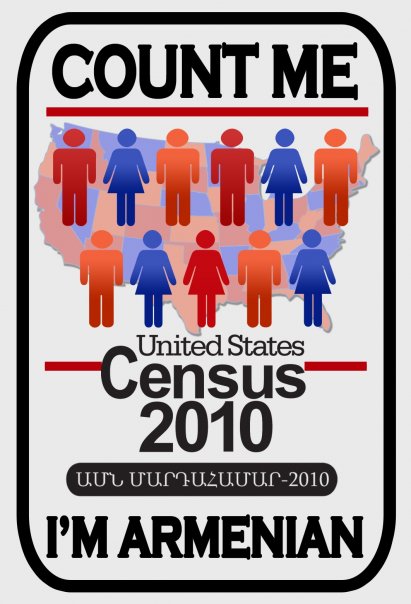 Anahit Tovmasyan is on a mission. For a year and a half, the Census Partnership specialist has been rallying the Armenian community in Los Angeles and beyond to prepare for the 2010 Census. Her effort includes making sure no Armenian gets left behind like they did in the 2000 count, which clocked the Armenian population at a little more than 385,000 leaving 75 percent of Armenians unaccounted for, she said.

Tovmasyan, passionate about her culture and community, has set out to spread information any way she can, including through schools, organizations churches as well as via social media tools like Facebook and Twitter.

On the heels of the 2010 count however, a sensitive issue has been stirring as Armenians and dozens of other ethnic groups prepare to make sure they’re represented.

The problem? The lines between ethnicity and race have been blurred as a new, shorter Census form asks questions about Race yet includes options like Chinese, Korean and Guamanian as part of the mix.

“When we saw questions it was very upsetting for many ethnic groups,” Tovmasyan said. “Since when is Korean or Chinese a race? There are only three races – “White, Black and American Indian.”

The 2010 Census includes Asian Indian, Chinese, Filipino, Japanese, Korean and Samoan among other options. The 2000 Census also included the same options based on the classifications of race as dictated by the U.S. Office of Management and Budget’s 1997 Revisions to the Standards for the Classification of Federal Data on Rate and Ethnicity (OMB). The Public Information Office could not be reached for comment on how  385,000 Armenians were counted in the 2000 Census at the time this article was published.

The 1997 OMB standards say that data on race are to be classified into one or more of the five minimum categories, which include “White, Black or African American, American Indian or Alaska Native, Asian and Native Hawaiian and Other Pacific Islander.”

While the standards point out that racial and ethnic categories included on the Census shouldn’t be interpreted as “being primarily biological or genetic in reference” but thought of as social and cultural characteristics as well as ancestry,” an important factor that has influenced the inclusion of categories such as  Asian and Native Hawaiian is immigration waves.

The standards also state that the collection of more detailed information on population groups is permitted, provided that any additional categories can be aggregated into the minimum standard set of categories. For Armenians, this means it can be aggregated under “White.”

“If you do write in Armenian, it will probably be coded to White because Armenian isn’t a race, said Tina Stewart, an information technician at the Los Angeles Regional Census office.

Stewart recommends that the correct place to mark ancestry is in the American Community Survey (ACS).

The ACS, which replaced the long form portion of the decennial census is sent to about three million housing units annually from every county in the nation.

Lowe also said that if you were to write-in “Armenian” as your “race on the 2010 Census, your response would be coded as “white.”

But for Tovmasyan, the ACS isn’t good enough, because it only covers 2.5 percent of the population she said.

“That’s not going to have an accurate number to show how active the Armenian community is. They cannot tell anybody they don’t have the right to identify themselves as they want,” she said.

Count Me, I’m Armenian and Arabic and Iranian 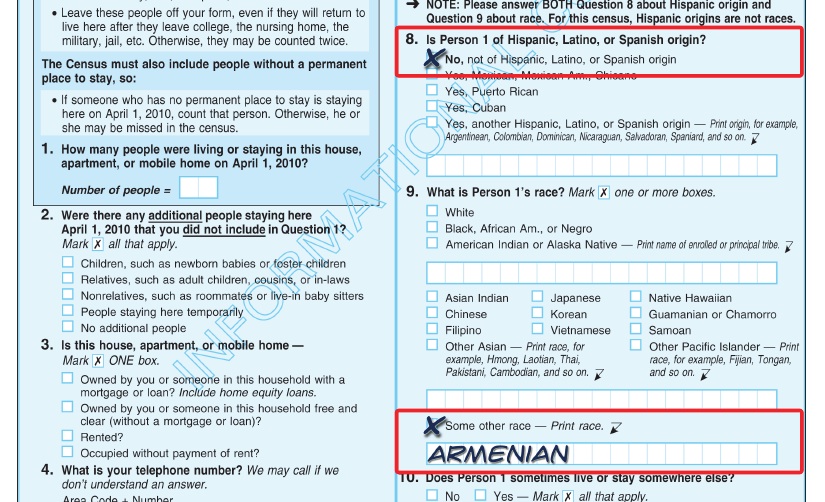 When Census Bureau officials came from Washington D.C. to train Tovmasyan and other Partnership Specialists about the 2010 forms, the question about exclusion of several ethnicities and the inclusion of others was raised. She was told that marking “some other race” and then filling in “Armenian” would work, she said.

But it wasn’t just her that took this message. Specialists dealing with Arabic and Iranian communities have also run with the idea of using new media to increase awareness of being counted.

Iranican, a non-profit organization, recently teamed up with Maz Jobrani to create a PSA about writing in “Iranian American” instead of checking off “White.”

Earlier this month, an article by about Arab-Americans aiming to increase their count in the Census was published on Newsweek’s website.

To Tovmasyan, putting Armenian as your race doesn’t hurt. She sees it as a way for exposure and power by numbers, contending that if as much as 1 million Armenians mark “Armenian” on their forms, it will be enough for officials to take notice.

“An odar isn’t going to do this for us,” she said. “We have to do it ourselves as a favor. I think I’ve created enough synergy out there with schools, organizations and churches.” 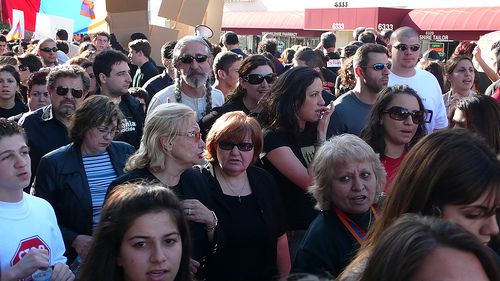 Tovmasyan’s biggest concern however, is the federal, state and local funding tied to the Census numbers.

In an article she wrote that was published in various Armenian outlets, Tovmasyan outlined why it was important to be counted.

“An accurate Census count of Armenian-Americans will ensure that Armenians will have a stronger voice and better political representation to address the needs of our community. Especially in these hard economic times, we need to make sure that the communities we work, live, pray and play in have access to their share of resources.”

According to a fact sheet put out by the Census Bureau for Partnership Specialists, the federal government can allocate more than $400 billion to states and communities based in part on census data. The data can also be used for writing grant proposals and community planners and governments rely on the data to determine where there is a need for social services and funding.

Tovmasyan hopes that this campaign will quell any fears that the Armenian community might have when it comes to filling out the official Census form and arm those who are uninformed with the knowledge to make a difference.

“If we’re physically on paper, it will be counted and we can have funding,” she said.

Reflections as an Armenian Woman on International Women's Day