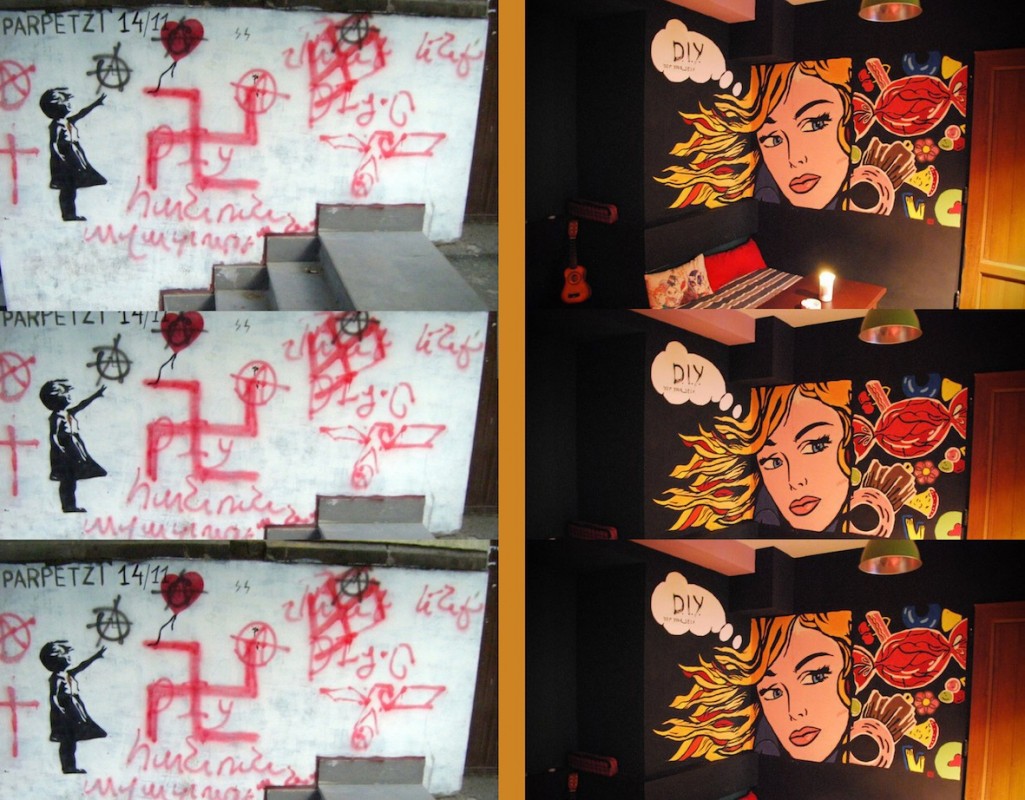 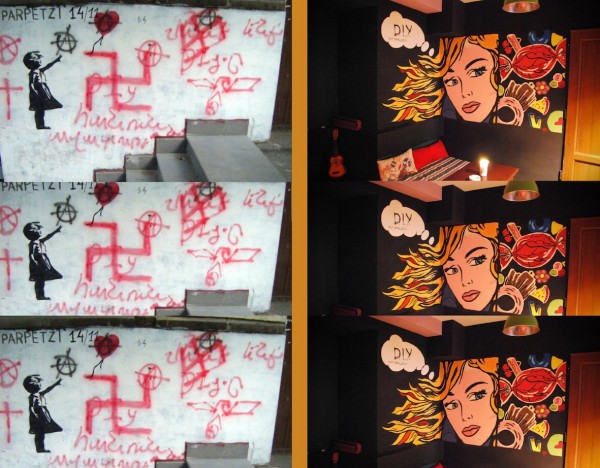 DIY's exterior vandalized with swastikas, photo courtesy of Z.G/DIY's interior, which had experimental and iconic art painted on its walls/via DIY's Facebook group

In 2011 Armenia ranked 87th in the UN’s Human Development Index, well behind Caucasian neighbors Georgia and Azerbaijan. Last year Forbes reported that the Armenian economy was the second worst in the world, owing in part to a 15 percent contraction and slim prospects of growth in the near future. Per capita income in Armenia is around $3K USD, a third of that in neighboring Turkey, and most social services are abysmal if they exist at all. Indeed, one of the largest sources of income for the tiny and impoverished country are remittances from the Armenian diaspora. Strikingly, a 2008 study by USAID reports “that for households receiving remittances, remittances make up 80 percent of household income on average.”

Such grim figures and facts paint a picture of an Armenia in danger. If Armenia is not to, as one senior American official has warned, devolve into a “Disneyland for the diaspora,” it must refocus its priorities, solve its standing conflicts with neighbors, create a hospitable climate for foreign business and investment, and, in short, create a more modern, forward-looking society. What Armenia cannot afford to do is to fan the flames of hatred and fascism within its own borders and look for sanctuary in comfortable prejudices and stereotypes come what may.

As most readers will know, in the early morning hours of May 8, two terrorists broke the front door of a DIY, a Yerevan bar and threw a Molotov cocktail into the popular establishment. The flames, catalyzed by petrol, destroyed the front have of the pub. Thankfully, no one was hurt and the terrorists were quickly caught, despite initial police inaction. However, the reaction by the government has extinguished any hopes of this violent act of bigotry becoming a teachable moment.

Dashnak parliamentarian Artsvik Minasyan posted bail for one of the accused perpetrators and later, with reference to one of the bar’s owners, the openly gay Tsomak Oganesova, offered reporters this gem, “her kind are destroying Armenian society.” His sentiments were later echoed by Eduard Sharmazanov Vice President of the Armenian National Assembly who said, “As an Armenian citizen and member of a national-conservative party, I find the rebellion of the two young Armenian people against the homosexuals, who have created a den of perversion in our country and have a goal of alienating the society from its moral values, completely right and justified.”

Unbelievable. In 2012 how can one even respond to this?

To begin, Mr. Minasyan, I must respectfully beg to differ. It is not Ms. Oganesova who is “destroying Armenian society,” rather such destruction is being undertaken quite effectively by Armenian politicians and their elite business friends. What poses more harm to Armenian society, the oligarchs who rape the country of wealth and resources, depriving their fellow Armenians of daily bread? Or Ms. Oganesova who owns a bar on Parpetsi Street where people go to discuss ideas and have a beer? Who is driving the country asunder, Mr. Vice President, those who observe the laws of the country and harm no one, or those who violently destroy property—and some day no doubt, if not stopped, people? Who is the real enemy?

Armenia is foundering. The economy is in tatters, art and culture are under attack, and reactionary forces are seeping in to cement the cracks of a barren, oppressive, and all encompassing edifice that has become contemporary Armenian society. The last thing Armenia can afford is for government officials to fail to condemn in the strongest terms domestic acts of terrorism and bigotry. If there remain Armenians in the influential Western diaspora who are not already disgusted with the country—they surely will be after these asinine comments. Armenians here and abroad should express their outrage against the terrorists and their political benefactors as well as against the nascent but growing fascist movement in Armenia.