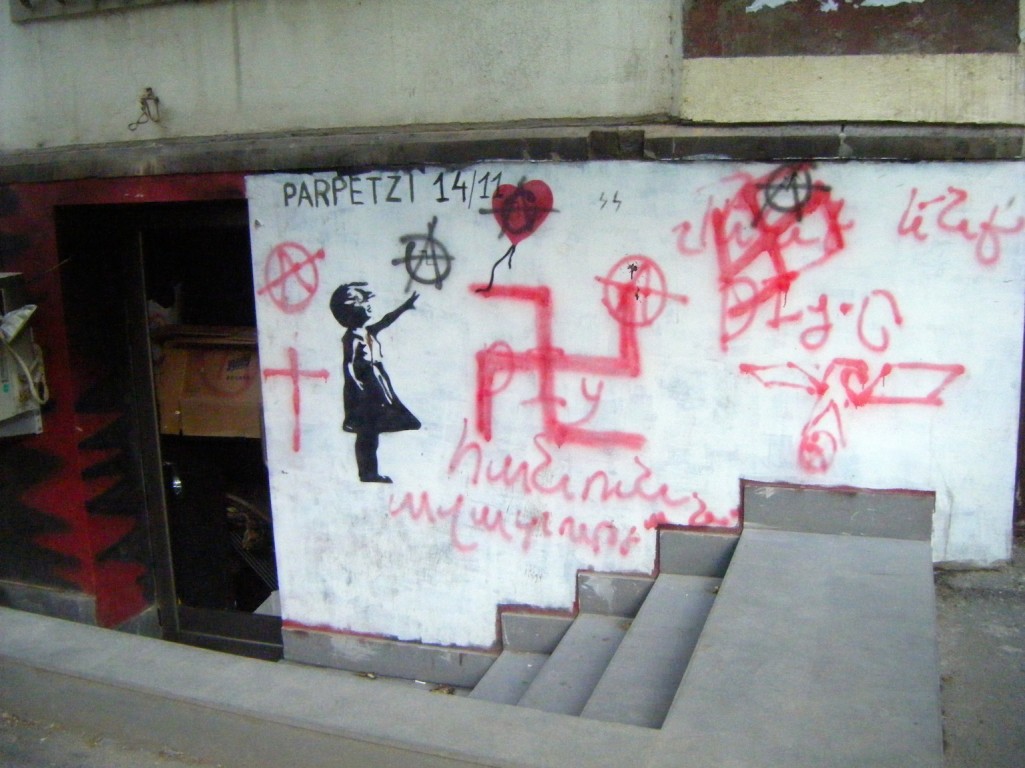 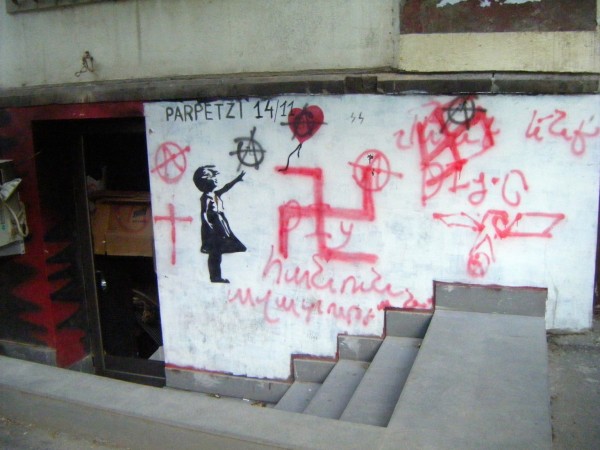 After the firebombing of DIY bar in Yerevan, swastikas were painted on its walls/photo courtesy of Z.G

Prominent officials in Armenia have made public statements in support of arsonists who firebombed a popular bar in Yerevan in a hate crime against the country’s gay community, a move that activists and human rights group Amnesty International have strongly condemned.

Following the early morning blast at DIY bar which left thousands of dollars in damage, Armenian Revolution Federation-Dashnaktsutuyn member of parliament Artsik Minasyan bailed out the suspects and defended their actions, calling them normal and in accordance with Armenian societal values, while singling out bar owner Tsomak Oganesova whose participation in Istanbul’s Gay Pride Parade last year motivated the attackers.

Oganesova, who is also a member of Armenian punk rock band Tsomak and Pincet project, fired back on a program on Horizon television, saying that she had seen comments on the social networking website Facebook praising that the bombing of non-traditional bar DIY was on the same day as the liberation of Shushi.  The city  was significant in Nagorno-Karabakh conflict whose capture by ARF batalions  on May 8, 1992, marked a victory for Armenia in the war with Azerbaijan.

“I don’t want to point to Dashnaktutuyn, but it looks like this is going this way,” she said. Oganesova then said that the ideologies of fascism and Dashnaktstutuyn aren’t too far from each other.

After the bailout and public support by Minasyan, the bar was vandalized again. This time, anti-fascist posters supporters had made were ripped down, while swastikas were painted over the facade of the bar.

Minasyan followed up with an interview on Armenia’s Shant TV in which he described Oganesova and supporters as trying to benefit from the explosion by inviting attention upon themselves, saying that their public out cry is “damaging to society’s morals.”

Since Minasyan’s comments several other high profile officials have come out in agreement. National Assembly Deputy Speaker Eduard Sharmazanov told Armenian media he supported  the actions of the arsonists against homosexuals, “who have created a den of perversion in our country and have a goal of alienating the society from its moral values,” he said. Hovhannes Sahakyan, a member of the ruling Republican Party, in an interview with Aravot, called the suspects patriots.

“As a citizen I welcome these young people, as well as any legal means and methods of struggle against all harmful phenomena,” he said.”For me it’s more important, that those youth recognize what being Armenian means, they feel their Armenian roots,” he continued.

Online, Hakob Barkhudaryan, the chief of staff of Public Council of Republic of Armenia created a Facebook page praising the arsonists, reports Unzipped.

The bombing, its subsequent government affiliated support and the rise of ultra nationalist groups in the country has brought deeper issues in Armenia, a country with who does not meet the basic requirements of human rights standards in accordance with LGBT in a recently released report by the International Lesbian and Gay Association – Europe, up to the surface.

“In general, this attack is not an isolated incident, but rather, represents a deeper trend of intolerance, prejudice and bigotry,”Analyst Richard Giragosian, director of the Yerevan-based Regional Studies Center said in an email interview with ianyanmag. “Yes, of course, Armenia, as with many other countries, has a problem with “differences” within society, whether it is the gay community, religious sects, etc.  There is no “explanation,” but this is a broader problem that needs to be recognized, challenged and overcome.”

Giragosian says the issue is a road block to democratization and development to the isolated and landlocked South Caucasus country, which has closed borders with both Turkey and Azerbaijan over the Nagorno-Karabakh war and has 30 percent of its population below the poverty line.

” Armenia, most of all, can not afford such divisive and destructive trends,” he said, adding that the idealogy behind the attack hidden behind ‘national values’ is not different from that of the Young Turks, who drove and inspired the  1915 Armenian Genocide, in which over a million perished.  “This is the same hatred that drives genocide, something that should be especially grave, inexcusable and unacceptable for each and every Armenian.”

The attack has turned into a matter of national and international debate as several organizations, most notably sections of the ARF have condemned the attacks.

ARF’s Shant Student Association was the first to release a statement after activists called on the political party to publicly come out against the attacks.

“The egregious act and subsequent statements run counter to the fundamental tenets and ideology of the Armenian Revolutionary Federation,”the statement said. “The ARF advocates individual freedoms and rejects all forms of and expressions of domination and exploitation including fascism, racism, and chauvinistic manifestations of national supremacy…We stand in full support of an Armenia that is free of all forms of discrimination, intolerance, and violence. Those responsible for the crime must be brought to justice to the full extent of the law.”

The ARF Central Committee followed, commenting that they find “the incident’s root impetus of homophobia and intolerance as equally reprehensible” while calling the blaming of the ARF party as a whole “equally deplorable.”

The political party, which has a large diasporan membership, currently holds six out of 131 parliamentary seats after last month’s elections.

Amnesty International called the supporting discourse dangerous while adding that it fueled discrimination.

“The official response to the firebombing in Yerevan is utterly shocking – protecting the human rights of LGBTI people is not a concession, but an obligation under international law that Armenia is a party to,” said John Dalhuisen, Amnesty International’s deputy director for Europe and Central Asia

The Armenian Gay and Lesbian Association of New York released their own statement, offering support to Armenia’s LGBT community, while calling on the Armenian Parliament and ARF to reprimand Minasyan by asking him to remove or resign from office immediately for “inflaming conflict and endangering lives.”

A petition on the site has been created on change.org created calling on Socialist International, London to suspend ARF membership based on the comments by Minasyan.

Homophobia in the South Caucasus as a whole is prevalent. Armenia and neigborhing Azerbaijan have been ranked as some of the worst places in the world to be gay, according to the ILGA-Europe index. Meanwhile in Georgia, LGBT activists were attacked by Orthodox Christians as they tried to march in downtown Tbilisi to mark the International Day Against Homophobia. In Yerevan, the day was marked more calmly, Global Chaos reports.