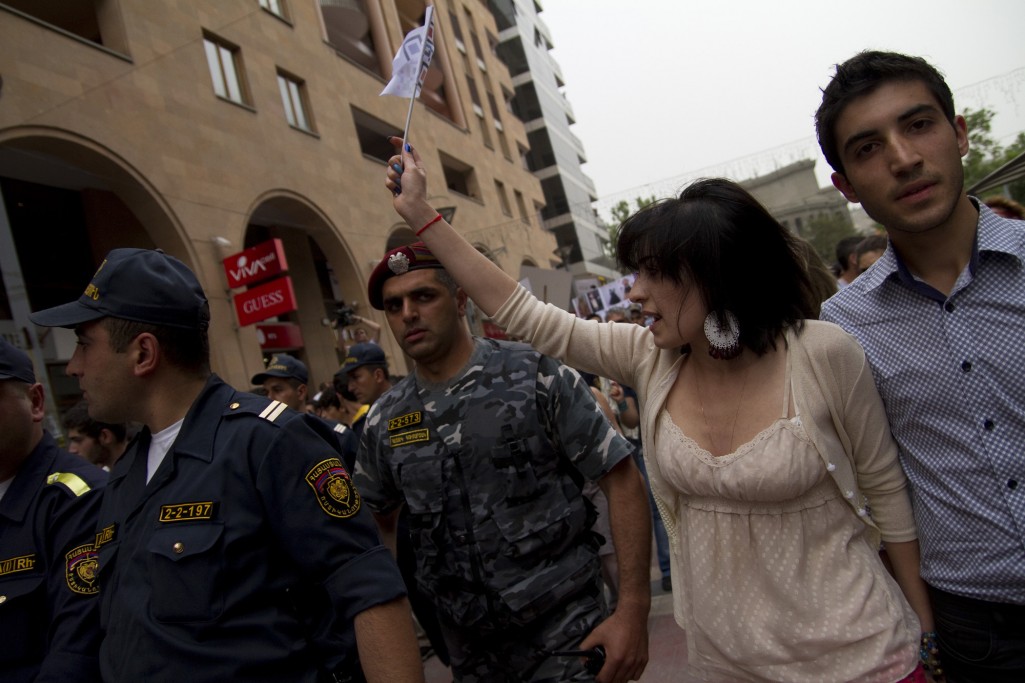 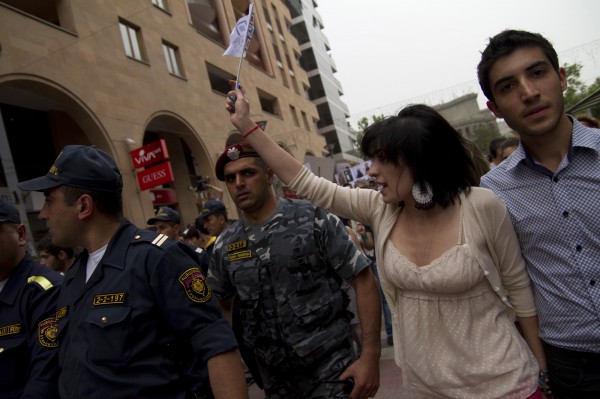 A march to mark tolerance and diversity held in Yerevan on Monday was severely disrupted by ultra nationalists who attacked activists, tore posters and hurled insults at the crowd, while they marched through downtown with police escorts.

Signs that read “No to Perversion” were held by around a 100 counter protesters, mostly young men, many of whom equated themselves as protecting Armenian values and the marchers with corrupting them. “Shame” and “Gays go to Baku” were chants regularly employed in an effort to intimidate the activists.

Organized by Public in Need of Information and Knowledge and the Womens’ Resource Center, the Diversity March was planned to mark the United Nation’s World Day of Cultural Diversity. The march and its counter protest came at a time when the socially conservative South Caucasus country is locked in a national debate after the firebombing of alternative and gay-friendly bar, DIY and subsequent support of the arsonist’s actions by elected officials, who praised the two men, Iranian-Armenian brothers, for protecting Armenia from homosexuality, which they considered a moral ill.

The counter protesters enveloped and outnumbered the organizers and activists, pushing into them and grabbing at signs as the crowd made its way Northern Avenue, according to a source who was present at the march and spoke to ianyanmag via email on the condition of anonymity.

Once both crowds arrived at Northern Avenue, the situation became elevated as police quelled scuffles that erupted while the march moved on and ended up in the lobby of the Golden Tulip hotel.

“It took the forcible removal by the police to clear the way for our entrance,” the source said. “We were literally walking through a gauntlet of screaming angry young men, escorted by police into the building. As soon as I entered my fear again escalated.”

The men, who called the diversity marchers “Turks,” also exhibited Hitler-like salutes and told them to go back to “Baku,” a dig at Armenia’s longstanding “frozen conflict” with neighboring Azerbaijan stemming from the Nagorno-Karabakh war. 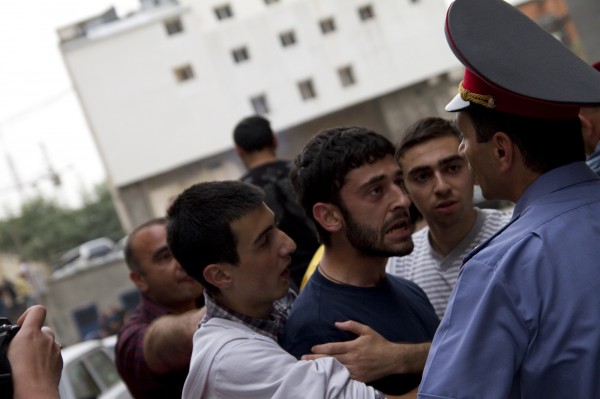 As the march progressed, the counter attacks became more forceful as a few had to be restrained/Photo by and © Anush Babajanyan

Several scuffles broke out along the way. Activists say that the police barrier protected them from a more physical, even fatal attack/Photo by and © Anush Babajanyan

Nora Kayserian, a ianyan contributor who was at the march said she felt disgusted and uneasy about the confrontation.

Maro Matosian from the Women’s Support Center was also at the march and said the inexperience of the police in dealing with opposite view points and mobs was apparent.

“There was no barrier between us and them,” she said in an email interview with ianyanmag from Armenia. “Finally I asked the police to separate us and we walked ahead…Thank God the police cordoned us as there were several attempts to attack the peaceful protesters.”

“The police saved lives,” he said. “There is not a single doubt in my mind that left without police protection, there would have been death at the hands of the angry young men. The police were professional in every way. These were the same guys I would see out at Mashtots Park.”

Many marchers, frightening by the counter attack, abandoned and left the crowd.

After the dispersal of both groups, there were reports that many of the men left to go to DIY  to vandalize it once again. Messages specifically directed to the bar’s owner, Tsomak Oganesova were written on the walls, including one that said “Tsomak, we won’t let you breathe.”

The attacks on the bar have been tied to organized ultranationalist, neo- nazi groups, including one named “Dark Ravens Armenia,” said to be responsible behind the bombing and subsequent vandalisms. The preparation of the counter protesters was a clue that the attack at the march was from more than a group of rowdy men, said Matosian.

“All their signs were uniform thus the thought that were were not random people, but an organized, backed up mass and financed as well.”

The diversity’s marchers signs were hand written, she said, adding that in one instance when she arrived at a police station after three young people were caught vandalizing DIY after the initial attack, the parents of the attackers attested that their sons belonged to neo-fascists groups. 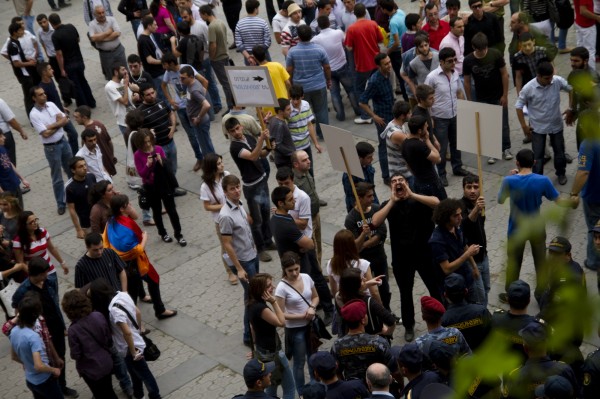 The Diversity marchers were confronted with a group of angry young men that outnumbered them, shown here/Photo by and © Anush Babajanyan

“We got very worried because we understood that there is a force and groups behind this vandalism.”

While the young men perceived the march as a ‘gay parade,’ activists insist it was to celebrate diversity and tolerance.

Yelena Osipova, who blogs at Global Chaos was also at the march and posted a full account, including video, of what she saw in a post titled, “Diversity March in Yerevan Hijacked by Ultranationalists.”

“The Armenian Constitution does ensure human rights and equality before law of all its citizens (Articles 14 and 14.1),” she wrote. “Despite that, however, it is clear that the majority of the public does not care about the law and still believes in the superiority of the its conservative and rigid social values in this case.”

Priests also showed up at the march, praising “patriotic youth” “who had gathered there to demonstrate their devotion to God and their nation,” she continued.

Nareg Seferian, writing in the Armenian Weekly in an article titled, “A Good Day for Homophobia in Yerevan,” noted a young man who exclaimed his disdain for rule of law by saying he “spit on the constitution.”

While activists in the country attempt to make headway, the support of arson attacks by authority figures and distortion in local media, many of whom focused on the counter protesters and mislabeled the event as a gay parade,  makes their work difficult. 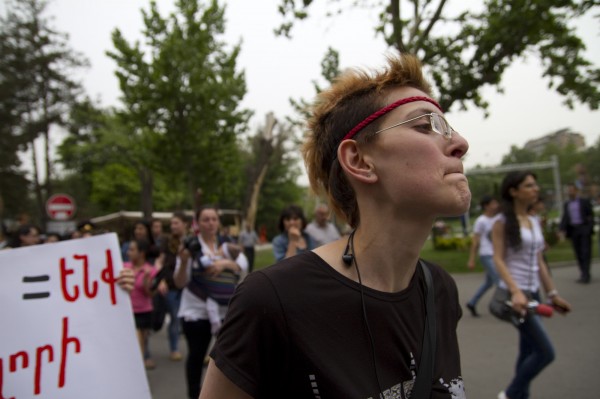 The marchers weren't anticipating the forceful attack and many left frightened. Here, an activist presses on amongst the chaos/Photo by and © Anush Babajanyan

A protester against the diversity march confronts police, who acted as a barricade, on Northern Avenue

“One thing must be done at government level and professional level –dispell the ignorance and condemn prejudice, discrimination, punish hate crimes,” Matosian said. “We should not here or read commentary from sexologists and other so called experts that homosexuality is a disease that can be spread, and people get contaminated just b y listening to the topic. Or that gays can influence the sexual orientation of young people, and that gays do propaganda to recruit people.”

Kayserian said she hopes the confrontation does not deter activists from their goals. “We cannot afford to lose progressives in this country,” she said. “We have to think of more strategies of dealing with these issues and we have to be patient.”

Our anonymous source echoed the sentiments.

“I continue to believe that the fascists are in the minority in this country, or I would leave Armenia,” he said. “Like the U.S., Armenia has its share of fanatics. I have many friends here that do not like homosexuality but would never resort to violence or intimidation to oppose it.” 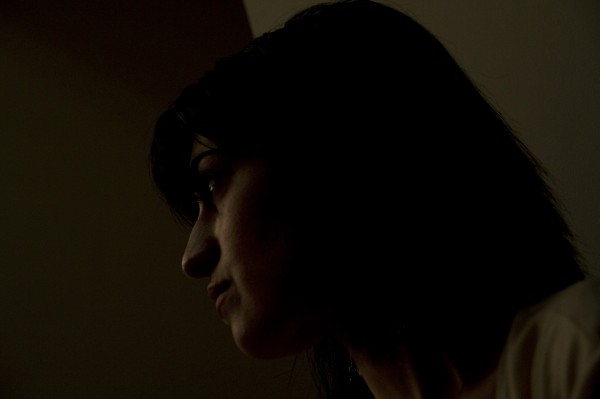 Today, Armenia’s Human Rights Defender Karen Andreasyan condemned [in Armenian] the violence against the country’s LGBT community as well as the public statements from officials in support of the attack.  The Gay and Lesbian Armenian Society of Los Angeles also released a statement condemning the attacks, calling them “clear examples of discrimination and oppression based solely on a person’s sexual orientation.”

They also called on the reprimanding and dismissal of the supporting officials.”Let not those who have faced the reality of intolerance and hatred inflict it upon others, no matter what the ‘context of our societal and national ideals,'” they said.