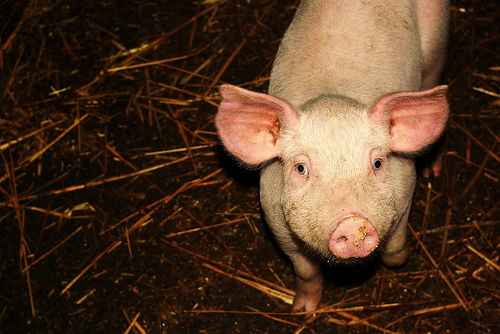 Full Disclosure: I generally like to keep this humble space free of bias, as my years of journalism school and experience has taught me. Objectivity is a key component of any journalistic standard. However, since this is a film review, my opinions on the subject matter at hand have a rightful place in this post. Before you continue, I want to make clear that I am a vegetarian. If you are interested in learning about my experience as one, read this post. If you are open to new perspectives and a departure from the status quo, care about animals and the environment, read on and then try to get a copy of “Voice of the Voiceless” in your hands. If the recent news of animal abuse and torture in Armenia has shown us anything, it is that this film is as important as ever.

“I do not like eating meat because I have seen lambs and pigs killed,” celebrated Russian/Polish ballet dancer Vaslav Nijinsky once said. “I saw and felt their pain. They felt the approaching death. I could not bear it. I cried like a child. I ran up a hill and could not breathe. I felt that I was choking. I felt the death of the lamb.”

Though “Voice of the Voiceless,” a documentary by David Sarkissian and Ovsanna Hovsepyan is only 20 minutes long, Nijinsky’s words define the epitome of emotions that  flood through you as you watch this film.

In its simplest of terms “Voice of the Voiceless” documents the life of farm animals in Armenia, from their birth to their violent and agonizing deaths. However,  just describing what this short entails does not do it justice. Set to music from singer Moby, who doubles as a vegan, the film is a chilling, stark and hard to stomach look into the exploitation of animals – but it is one that must be seen, especially by Armenians, whose cuisine carries with it copious amounts of meat products that are eaten daily.

A calf being fed by a farmer, while the milk its mother produces is squeezed into buckets for human consumption, a helpless sheep tied up and forced to be sheared, chickens who live in cramped battery cages with no sun, no fresh air and especially no room to move – these are the digestible parts. The minutes where you feel horror, pain and helplessness come later: the cow being dragged with a crude rope to meet death, the pig -an animal that is regarded as more intelligent than a dog, having its head brutally smashed in and then cut off, the sheep struggling to get away from the farmer who is mercilessly slicing his throat or the chickens whose heads are being cut off with a simple pair of scissors. This is not something you should watch – it is something you must watch, because that steak that you’re having for dinner, it didn’t drop from the sky and form into a nicely wrapped plastic package. It had eyes, and teeth and a tail – it could feel. It felt pain at the hands of humans whose responsibility is to protect it. It had its new born baby ripped away, tied up to be killed for the pleasure of consumption.

If slaughterhouses had glass walls, everyone would be vegetarian, said Paul McCartney. This powerful and eye opening film that boldly declares “those with a heartbeat are not for us to eat” is a glimpse beyond that glass wall.  Because the cow can’t scream or the sheep can’t cry, we are ignorant to its pain. We accept the way things are. We say, “that’s just the way the cookie crumbles,” while we stuff a few pieces of bacon in our mouths. “Voice of the Voiceless” uncovers in plain sight the process of how a living, breathing animal becomes your kebab. The faces of those animals, who are not only being killed in Armenia, but all over the world leave you with a lasting impression that will make you think twice before having that ham sandwich. The words I write here however, will perhaps fall on blind eyes. In that case, see this film. Don’t count on this review to change your mind. Count on those images that are so beautifully strung together with moving music by Sarkissian and Hovsepyan to affect you. I leave you with one last quote, courtesy of Moby: Could you look an animal in the eyes and say to it, ‘My appetite is more important than your suffering?'”