By Contributor April 22, 2009 in Commentary, Features 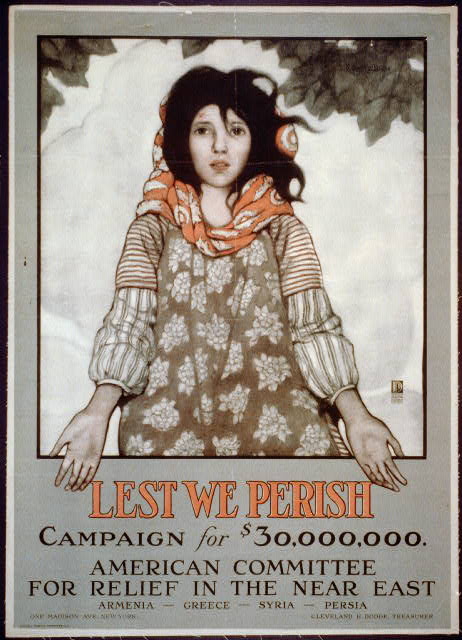 On the eve of the 94th anniversary of the Armenian Genocide, I have many thoughts racing through this crowded mind of mine. I feel no need to rehash the terrible events that took place in 1915, as you can learn more about what took place here, here and here.

Instead, I feel horrified that the Genocide has carved out perhaps the biggest chunk of Armenian history, disappointed that it has determined much of our future and hopeless at any signs of recognition by Turkey or the world. I’ve come to realize many things; that recognition is necessary and I will always fight for breaking this 94 year cycle of silence, but despite this, the Genocide does not define me and that I will not allow myself to become a victim of it.

I have read our history books, seen countless documentaries, read editorials and participated in discussions and still, I do not hate Turkey. I believe in Armenian-Turkish relations. I believe an eye for an eye makes the whole world go blind and I believe the Diaspora’s approach to solving the silence has been horribly misguided.

In the article, “The Reconstruction of Armenian Identity in Turkey and The Weekly Agos ,” writer Baskin Oran summarizes the entire philosophy of Dink’s Agos newspaper. The following statement I believe, should be strongly taken into consideration by Diaspora Armenians, who suffer from boisterous nationalistic sentiment and try to eradicate hatred with more hatred.

“Armenians should be able to get rid of the residues of the past and look at the problems through the eyes of the other side (the majority) as well. In other words, Armenians should be able to display empathy. This will incite the majority to act the same. This second observation, which H. Dink expressed by saying “Turkish-Armenian relations should be taken out of a 1915 meters-deep well” , is of great importance, because it is a hundred per cent against the genocide thesis of the Diaspora and the Republic of Armenia. In this context empathy has nothing to do with accepting or refusing the genocide.”

According to Agos, the genocide discourse is not a historical term but a political one. It is cherished by the Diaspora for two important reasons :

First, it is a “national cause” that hinder its assimilation ; second, it increases its political influence in the host State. But the same discourse is blocking both the Turkish-Armenian dialogue and the integration that is in the good interest of Armenians in Turkey. What’s more, this blocking is being made while the Turkish intellectuals have started questioning 1915 in every way. Everyone should abstain from blocking a dialogue that would for sure be beneficial to everyone (the Diaspora, Republic of Armenia, Turkey).”

These are reasons why that out of my own free will, I will not march down to the Turkish embassy, wave my signs, scream bloody murder and attach flags to the side of my car to parade down the streets with. In fact, when I think of the thousands of Armenians who will be participating in such displays, I suddenly become embarrassed.

Do not misunderstand me. Genocide recognition is important, but to let it define every fiber of your being, to constantly bash Turkey in our newspaper editorials, to instill hate in the minds of Armenian children and to incite blind nationalism does more harm than good.

Still, I feel conflicted and struggle with the same thoughts as any Armenian would. There are times when I am overwhelmed with pride in my cultural roots, that I feel that the Turks must pay deeply for virtually destroying my nation. There are other times when I feel that recognition would not have any impact on my life whatsoever and that seeing Armenian newspaper articles demanding that Turkey owes us an apology or that President Obama should be ashamed because he has not yet kept good on his promise that the U.S will recognize the Genocide makes my head spin in frustration.

But I realize that what we need is dialogue.

What we need is to stop playing the victim.

What we need, is to stop using the Genocide as a crutch and focus how we can improve Turkish-Armenian relations, the political and economic standing of Armenia and the discrimination and hostility we perpetuate on other ethnic and marginal groups.

In 2007, I wrote hoping that Armenians will recognize that to move two steps forward, we must not take one step back. In 2008, I expressed disdain for the tactics we use on April 24 of every year to let our voices be heard. In 2009, two years after the death of Hrant Dink, the same question still burns in my mind: Why can’t we take a different approach?

There are Turks who don’t admit that their ancestors committed genocide. If you look at it though, they seem to be nice people… So why don’t they admit it? Because they think that genocide is a bad thing which they would never want to commit, and because they can’t believe their ancestors would do such a thing either – Hrant Dink

On the social networking site Facebook, there exists a group that is taking steps in the right direction, entitled “Turkish, Armenian, Kurdish Friendship .” The group, which promotes Armenian and Turkish understanding boasts 16,403 members.

The true meaning of what such a truce can mean is not understood until you see messages written by a young Armenian man the group’s page:

God does not recognize ethnicity, but rather humanity. We would better serve ourselves if we look beyond ethnic division and look at what is truly important in order to make a friendly relationship successful. Some of such things would include values, morals, and ethics. As they would not make it a prerequisite to judge a person by their ethnic group with most other relations, Armenians and Turks should not do so toward each other.

Some of the most hateful and dividing individuals for any ethnic group are those who have never been exposed to people of the group of which they hold a prejudice. This is not an exclusive phenomenon within Armenians and Turks. This is something that happens with all ethnic groups. If they have been exposed to individuals from the latter group it is because they were actively seeking people that they would already not like. They look for people who are radicals, just as they were. They fail to understand that the radicals are not much liked by their own ethnic group either.

Still another group, “Peace for Armenia and Turkey,” with 1453 members is a breath of fresh air:

When my father passed away, his funeral was like a literal Armenian and Turkish gathering… So many Armenians came to show their love and respect. What I’m trying to say is, please, don’t hate. Don’t spew hateful words. This is a wonderful site. I pray more Armenians and Turks come together on this group to discuss, honestly and objectively, what our history is… and what our future will be. Don’t teach your children hate – I thank God our parents didn’t do that to us. Look at how much I would have lost if all our parents kept me away from them. Lets resolve the differences of our history peacefully – there is no use spouting hateful remarks to Turks or Armenians for that matter. For all those Turks and Armenians saying rude and nasty things to the other side – is this the legacy you want to leave for your children? Above all, teach the younger generation about the past – the truth – but don’t teach them to hate the other side.

I’m very happy to see a group like this…I’m a Turk, living in Lebanon (and there are many Armenians, as many people would know…) And one of the BEST people I’ve ever met in my life, who have changed my view on life, one everything were ARMENIAN..and I love them, and I have no problem with Armenians…I just wish…wish…there could be peace…we share so many things in common…if we just held hands, we could amaze the world.

I want peace between our two nations, I want to be broken free of the chains of genocide, I do not want 94-year-old events to bind me and wind me as tightly as they do. Is this possible? When I have children, can I look at them and say, “The Armenian Genocide is behind us?” Can I experience the future with Turkish recognition of the genocide or meet Armenians who do not live with the Turkish government of 1915?

“We are two sick nations: Armenians and Turks. Towards one another. The Armenians are suffering an enormous trauma towards the Turks, and the Turks an enormous Paranoia. We are both clinical.

Who will heal us? The decision of the French Senate? The decision of the American Senate? Who will write the prescription? The Armenians are the Turks’ doctor, and the Turks are Armenians’. There is no other medicine or doctor. There is no other solution. No and no. I am calling out to the Diaspora. Do not get stuck on 1915. Do not define yourself by 1915. Do not chain yourself to the acceptance of the world of this genocide. “Did we suffer? We suffered, our ancestors suffered terribly. I am from Anatolia. There is a good saying in Anatolia: ‘To bear the pain with honor and to carry it.’ Without shouting, without making noise.” -Hrant Dink 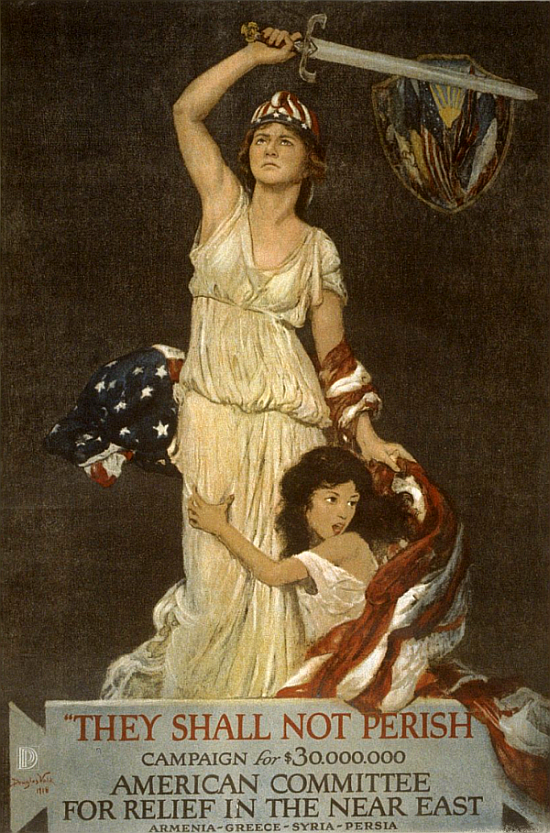 American Committee for Relief in the Near East, poster by Douglas Volk, 1918.