By Contributor August 3, 2009 in The Melting Pot 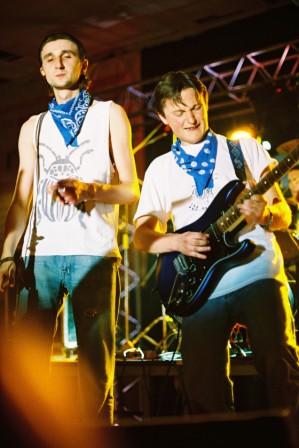 At first glance, Los Colorados, a Ukranian quartet that was formed in 2006, seems like they wouldn’t be able to compete with today’s Western pop music market, but along comes a little number called “Hot N Cold” by Katy Perry and Los Colorados becomes a sensation, on the internet at least, with over 2 million views of their cover.

Formed in 2006 in Tetylkivtsi, Ruslan “Prystupnic” Prystupa, Rostyslav “Rosylk” Fook, Serhiy “Masyanya” Masyk and Oleksandr “Lesyk” Drachuk, Los Colorados does have original songs, but with their use of the guitar, accordian, bass guitar and drums, their Katy Pery cover, entitled “Goryachyi i Kholodnyi” in Ukrainian has wowed audiences, as evidenced by the comments left on their video.

“Why﻿ are these men not famous? WHY”one commenter wrote, while another enthusiastic comment read “That was awesome. I’m going to force everyone in my office to watch this now.”

Here is their internet hit, “Hot N Cold” below – obviously a better version than the original.

The Price is Right, Armenian Edition