By Liana Aghajanian August 31, 2011 in Caucasus, The Melting Pot 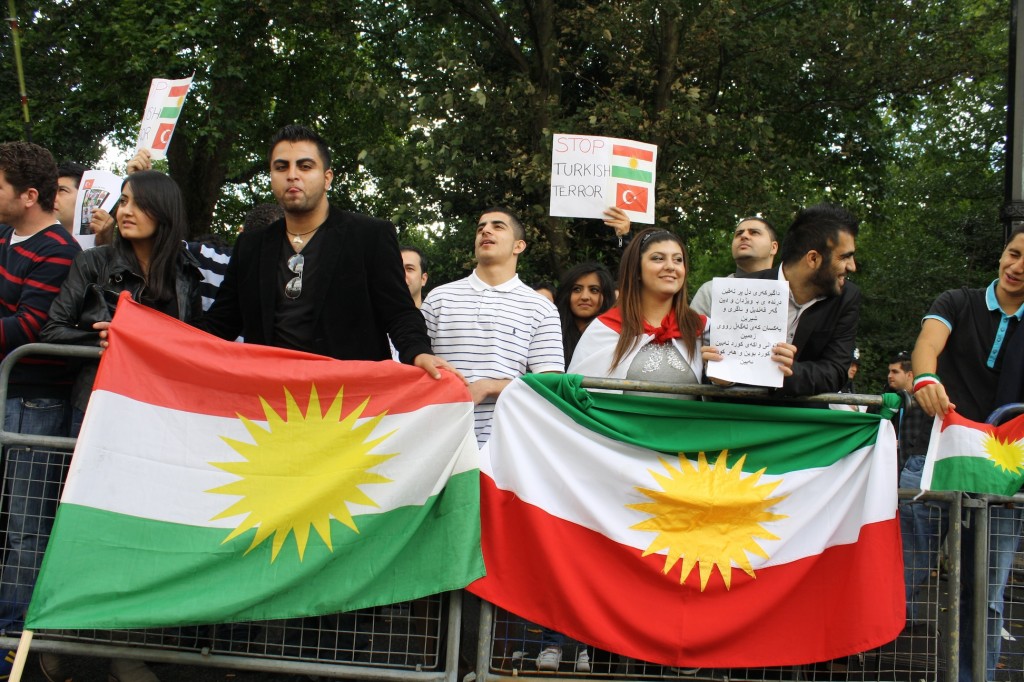 Inspired by an ongoing “Arab Spring” in countries throughout the Middle East and North Africa, Kurds in Turkey, which number around 20 million, have taken to the streets in Istanbul and elsewhere in the country to protest against political repression, cultural suppression, discrimination and a decision by Turkey’s election board to ban prominent Kurdish politicians from upcoming elections.

Hostile Turkish-Kurdish relations have been ongoing for more almost a century, but with aggressions mounting this year, and recent news of Turkey launching major air raids on Kurdistan Workers’ Party (PKK) bases in northern Iraq in response to landmine attacks by the party that left dozens of Turkish soldiers dead in Turkey’s Hakkari province, the conflict and increasing violence have reemerged stronger than before.

Outside of Turkey,  Kurdish Diasporans are also determined to call attention to another example of what they say is the “Turkish states repression of the Kurdish people.” From Tokyo to Nashville, Tennessee, Amsterdam and Rome, Kurdish leaders have been mobilizing protest demonstrations in recent weeks.

Kurds in the United Kingdom have also participated in protests, assembling in front of  the Turkish Embassy in London for an “emergency demonstration” against “Turkish bombardment of Kurdish regions indiscriminately and disproportionately,” said a press release to “Stop Turkey’s War Against the Kurds” on the site of Kurdish blogger and activist, Hevallo.

Protesters stood with Kurdish flags and posters denouncing “Turkish terror” while shouting for a “Free Kurdistan.”

While the Kurdish community in the United Kingdom is said to number in the 200,000s and the Facebook event page for the protest had over 1000 would-be attendees, the actual event saw no more than 50 demonstrators in front of the Turkish Embassy at London’s Belgrave Square. 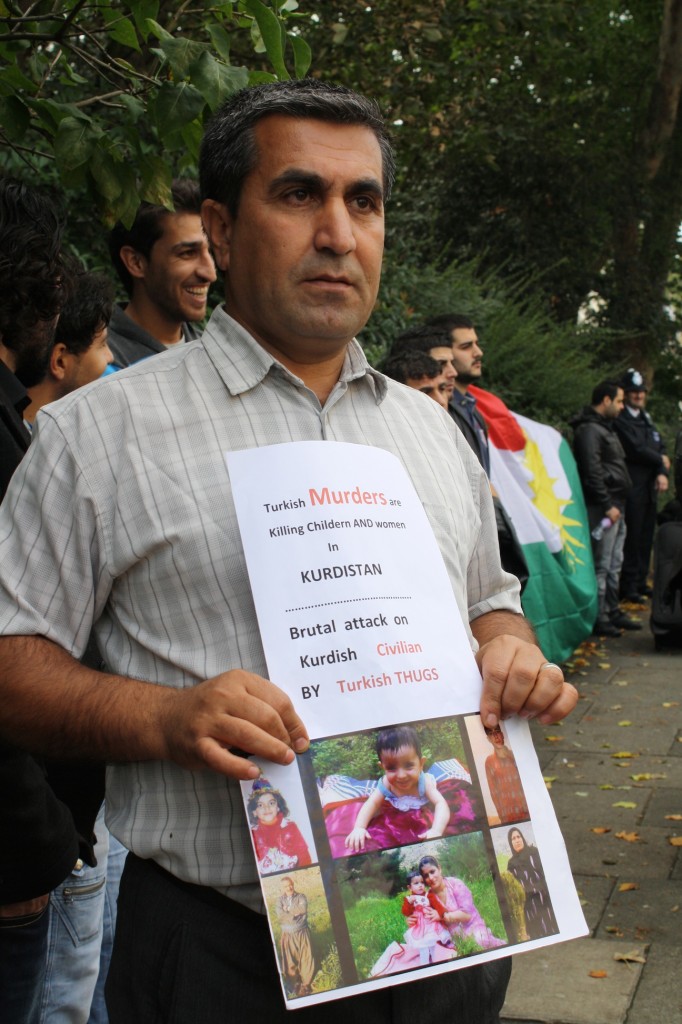 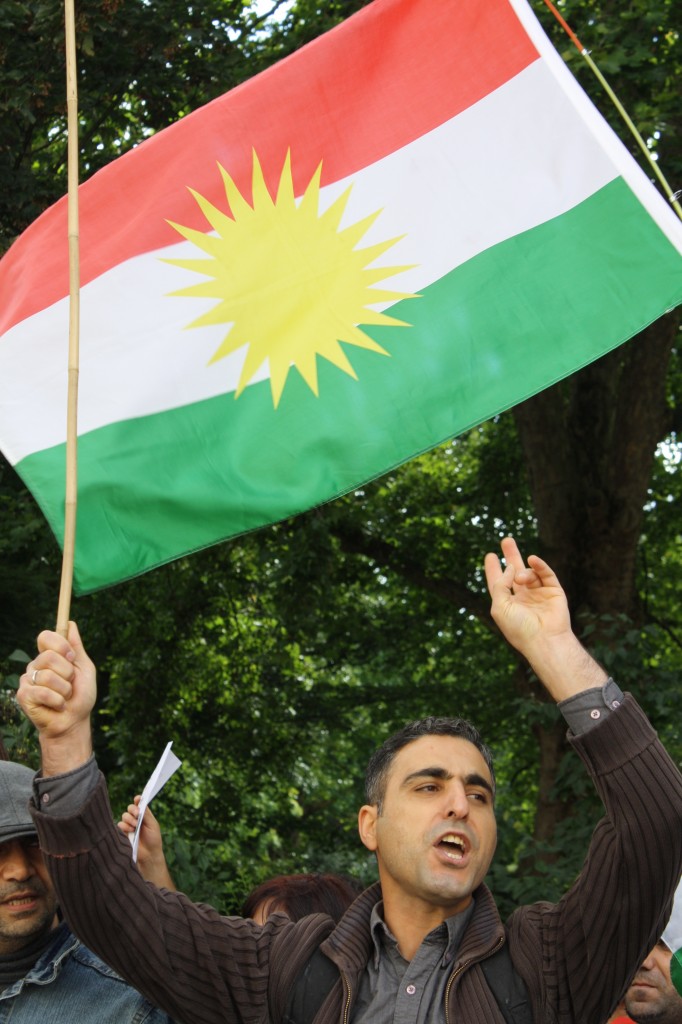 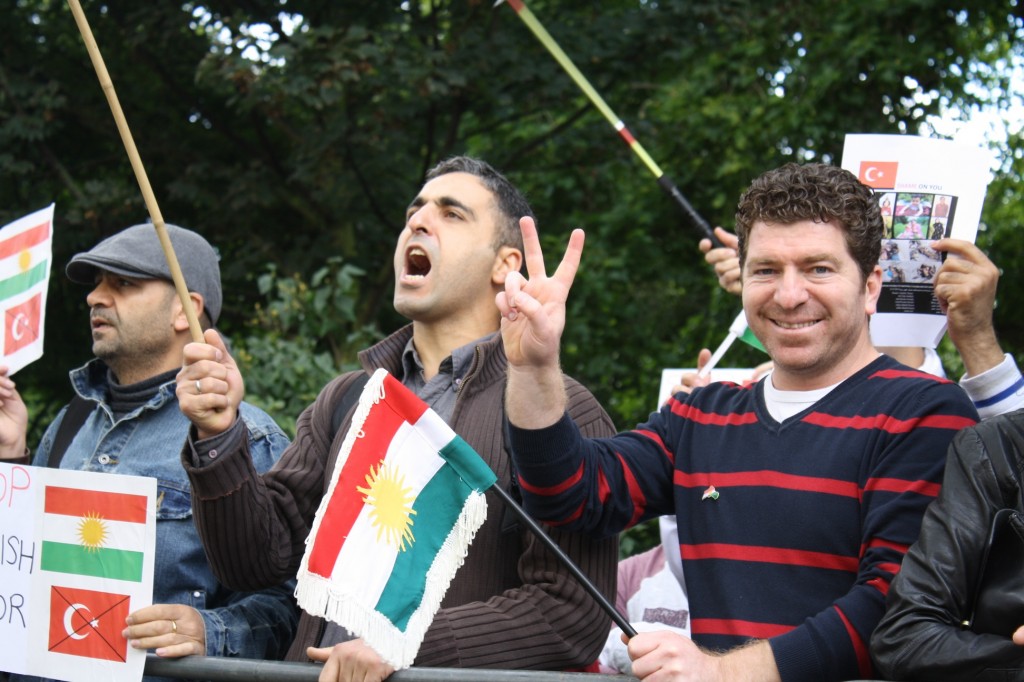 Demonstrators are also using social media sites like Facebook and Twitter to call attention to their cause, with hashtags like KurdishDemos and pages aimed to keep the virtual world abreast of news and events. 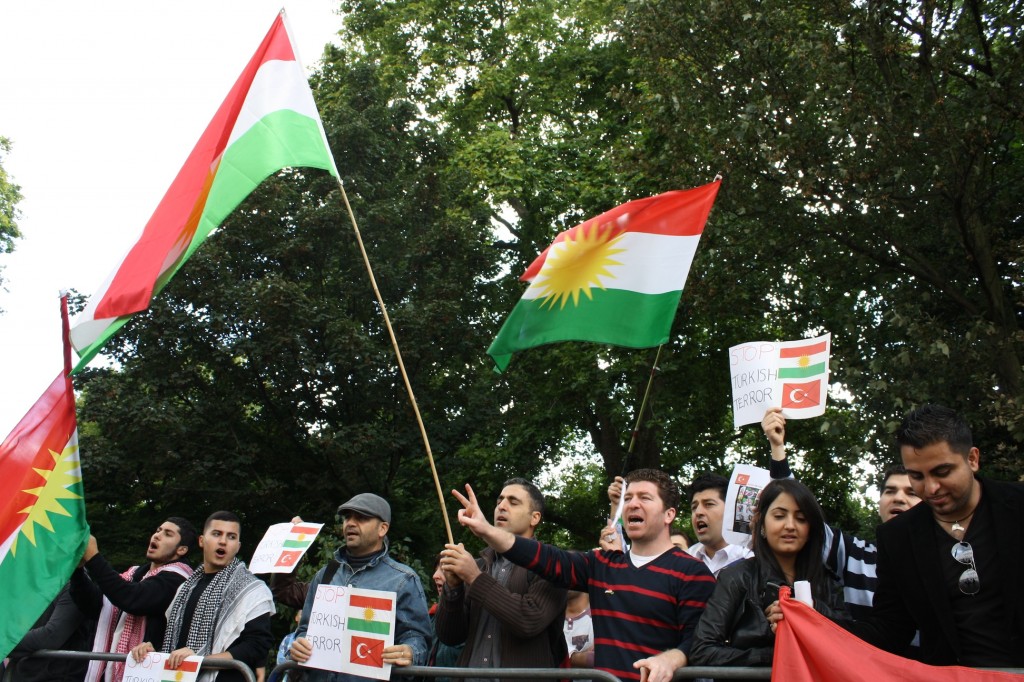 While the PKK is listed as a terrorist organized by a number of countries, including the United States (who also named it on a list of suspected drug traffickers), Iran, Azerbaijan and Iraq, many contend that labeling the party as such is a political move.

A recent post from Fréderike Geerdink, a freelance Dutch journalist in Turkey, which saw much heated debated in the comments section called on the labeling of PKK fighters as terrorists to stop:

By labelling the PKK as ‘terrorist’, its legitimate goals are being branded as irrelevant too. And at the same time the label is used to justify violent and legal reprisals against Kurds. Every bomb on Northern Iraq is self defence against terrorism, every court verdict against a Kurdish politician a sentence that suits a state of law. It stirs up anger and frustration among Kurds – no wonder the number of youths wanting to join the PKK is on the rise, as became known last week. Politically they see no possibilities whatsoever, so they see no other option than to ‘go to the mountains’, as it’s described in Turkey.

The PKK cease-fire is over. Soldiers die. Young men, often conscript soldiers and mostly inexperienced. Which leads to Erdogan’s decision to start air strikes on PKK camps in Northern Iraq, because, as he said, ‘our patience has come to an end.’ It can hardly get more cynical than that. The international recognition of the PKK as a terrorist organization has a disastrous effect on any chance for peace. It maintains a circle of oppression and violence. Time for a new political signal: strike the PKK off the list of terrorist organizations.

Kurds in Turkey, like other minorities such as Armenians, Greeks and Jews, have been targets of discrimination, though the Turkish government had announced a new initiative aimed at addressing the unresolved issues with respect to Kurds in Turkey through peaceful methods, according to a report published in February 2011 by the European Commission against Racism and Intolerance on Turkey.

The same report, however, goes on to say that “public use by officials of the Kurdish language lays them open to prosecution, and public defense by individuals of Kurdish interests also frequently leads to prosecutions under the Turkish Criminal Code.”

Another protest in London is scheduled for tomorrow, with hopes of bigger attendance and more vibrant crowd involvement.