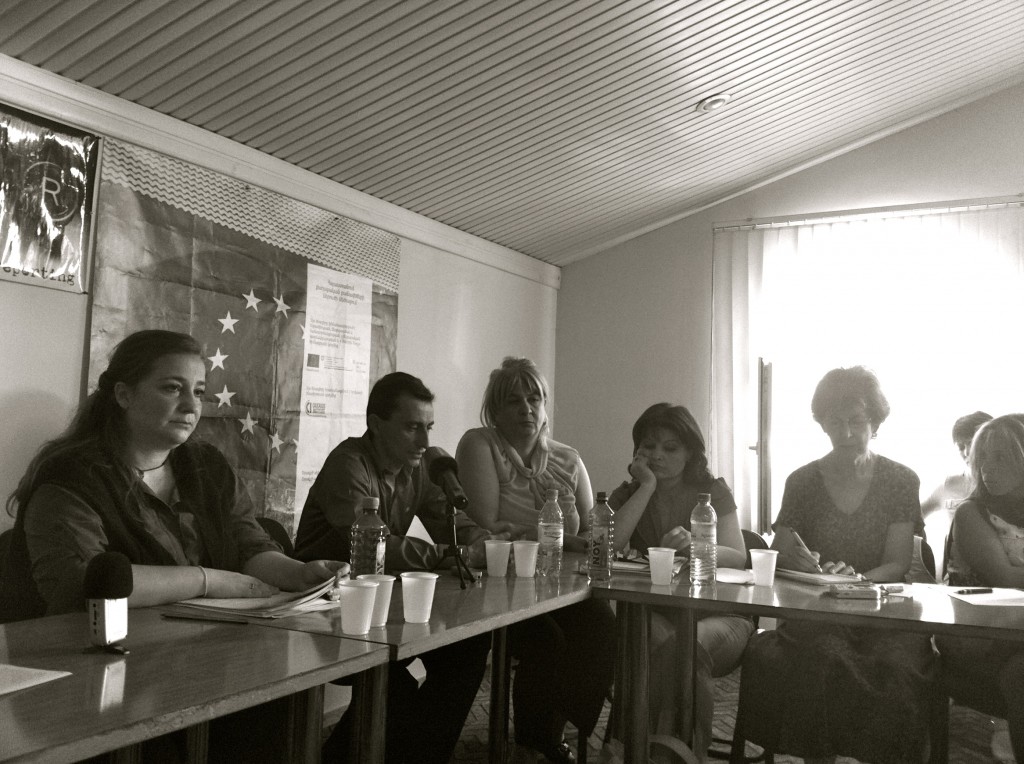 Women's Resource Center of Armenia founder Lara Aharonian (left) and Head of the Armenian Police Department of Juvenile Affairs Artur Vardanyan at a roundtable discussion on sexual abuse against women in Armenia/ By L.Aghajanian/© ianyanmag

Reporting from Yerevan – On June 8, the Institute for War & Reporting, in collaboration with the Women’s Resource Center of Armenia hosted a round table discussion on sexual abuse against women in Armenia, a taboo topic in the confines of the country that has been slowly but surely gaining grounds for awareness in the last year, perhaps overwhelmingly due to the brutal death of domestic violence victim Zaruhi Petrosyan which echoed into concerned Armenian Diasporan communities across the world.

After a public awareness campaign that included a television spot outlining that  sexual abuse knows no boundaries and can take place in the workplace, at school or on the street, the number of calls the Women’s Resource Center received jumped from 140 in 2009 to 320 in 2010. Breaking down the 320 calls, Aharonian reported that the nature of 40 percent of the cases was sexual abuse, 30 percent of which the victim knew the abuser.

Changing attitudes in Armenia about sexual abuse, gender roles and human rights still has a long way to go, as male and female roles are generally predetermined, with women expected to bear the brunt of the relationship, exercising control over being too vocal.

So why don’t women speak up about being victims of sexual abuse? Much of it has to do with “amot” meaning “shame.”  They fear that if gossip ends up spreading, they will be branded as not living a life that a good Armenian woman should live, said Aharonian. No faith in anyone believing them, including the police,  as well as the non-existence of a long-term resources that can help victims by providing a support base also factor into the equation.

Providing sexual education along with working with police and different organizations for long term resources and more media coverage is the multi-tiered plan to support victims of sexual abuse.

Members of the Armenian International Women’s Association (AIWA) who were visiting from the East Coast of the U.S. attended the roundtable. Eva Medzorian, founding president of AIWA was one of them, speaking up during a question and answer session about the global nature of sexual abuse.

“Women don’t know their rights,” she said. “This isn’t a problem just in Armenia, but all corners of the world.”

The deputy head of the Department for Crimes against the Individual of the RA General Prosecutor’s Office Artur Davtyan also attended the roundtable, and reported 82 sexual violence cases in 2010, a figure four times less than what WRCA reported in the same year. Head of the Armenian Police Department of Juvenile Affairs Artur Vardanyan was also present and assured attendees that the police department responds to all cases of sexual violence in a fair and balanced manner.

This wasn’t the only noticeable difference, as Adrineh, author of the blog “Le Retour” pointed out:

But what these two men couldn’t see — and interesting to note that the state agencies were represented by men while the NGO working to address the same issues was represented by a woman — what they couldn’t see is the human factor. The larger, societal, macro issue reflected in the micro day-to-day of our lives as women in this country, in this society, in this world. PINK Armenia president Mamikon Hovsepyan tried to at least draw attention to this by asking the men to put themselves in the woman’s shoes, think for a minute what it must be like… alas, I think the experience was lost on them.

In a largely patriarchal country with no established laws on domestic violence and the old saying “A woman is like wool, the more you beat her, the softer she will be,” Armenia has a long way to go in dealing with violence against women and girls. In Amnesty International’s 2011 report on the country, the organization found that “protection for women and girls still failed to meet international standards,” citing no progress with legislation specifically addressing violence against women and the setting up of shelters as well as Zaruhi Petrosyan’s case.

A recent case that drew media attention involved a 14-year-old girl from Goris whose pregnancy was aborted after she was allegedly sexually assaulted by her father.