By Contributor November 10, 2010 in Diaspora, Society 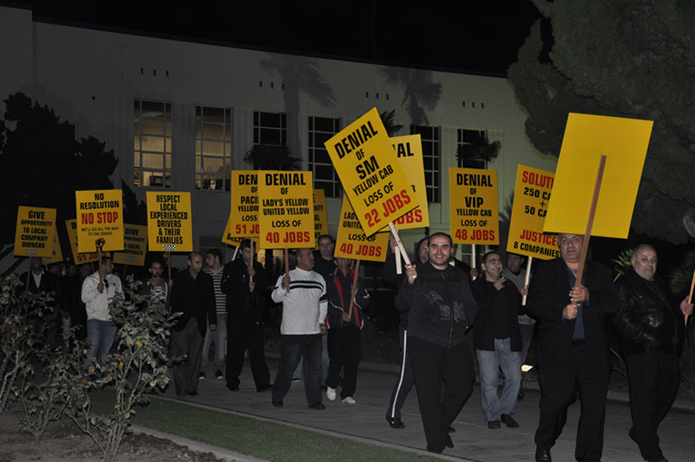 Despite a bevy of Armenian taxi drivers rallying at Santa Monica’s City Hall last night against a city proposed taxi limit that would leave them unemployed, the City Council approved the ordinance after hours of deliberation and several public comments from community representatives and drivers.

The ordinance was proposed after a study determined that the large amount of taxis were preventing the city from cutting back on vehicle emissions, as well as  after the Council received complaints from residents about high fees, poor customer service and Santa Monica cabs operating illegally in other cities. It will take effect in January 2011 granting Bell Cab, Independent Taxi Owners Association, Metro Cab Company, Taxi! Taxi! and Yellow Cab the ability to operate within the city.

Six of the 13 original applicants that submitted proposals to be considered within the city were owned or operated by Armenian-Americans, none of which were selected – a decision that would economically impact 300 families.

“We have suspicions of discrimination,” Nora Hovsepian, an attorney and a member of the board of directors of the ANC-Western Region said.
“We’re not accusing any body of anything right now, but the more information we get about the selection process, the more it gives credence to those suspicions, so we’re hoping that that’s not the case.”

Serouj Aprahamian, the executive director of AYF who was looking for transparency into the selection process Tuesday night.

“There’s no explanation that’s been given,” he said. “This is their livelihood, if they can’t work here, they have no where else to go.”

A vast number of recent immigrants from Armenia are employed by taxicab companies. According to Marco Soto, the director of public affairs for the administrative services co-op, which represents Yellow Cab of Los Angeles, 35 percent of Yellow Cab’s drivers are of Armenian descent.

Mesrop Injyan was one of the drivers rallying at City Hall. After winning a green card lottery, he immigrated to Los Angeles five years ago and began driving a cab. He was there on Tuesday night looking for answers.

“They are putting us out of work,” he said in an Armenian-language interview with ianyanmag. “We have been requesting from them what the selection criteria has been, what points the companies were selected on and until now we haven’t received an answer. It’s like if you’re playing basketball and the game ends, and you say this team wins and this team loses and I ask why, and you say that’s just the way it is.”

Before public comment, a representative explained that the 13  proposals were evaluated by an inter-agency committee of five members including representatives from the city’s Finance Department, Office of Sustainability and the Environment, the Police Department and the City of Los Angeles Department of Transportation Taxicab Regulation Division.

A memo on yesterday’s agenda denied the fact that the race, ethnicity, or nationality of owners or other personnel played any factor in the evaluation process or recommendation.

It wasn’t just Armenian-owned companies that felt they were being treated unfairly.

Euro Taxi, one of the other companies denied a franchise was represented by the Latino Business Association and South Bay Latino Chamber of Commerce and strongly opposed the staff recommendation. 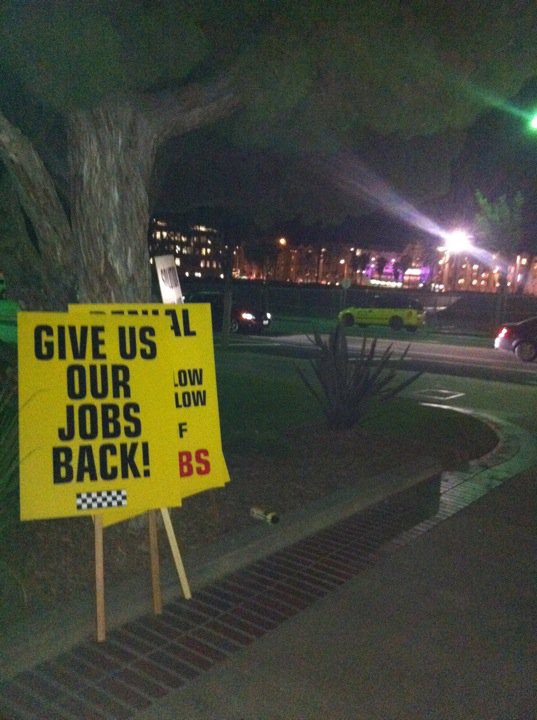 Ellen Poghosyan, president of V.I.P Yellow Cab, also denied a franchise, made a plea to the City Council to reconsider the ordinance that excluded her company.

“Just give us a chance,” she said. “This way we can decrease unemployment.” Poghosyan also noted that V.I.P was the only company that served the city of Santa Monica 24 hours a day, seven days a week.

Karapet Torosyan, who works for V.I.P. Yellow Cab, has been employed as a taxi driver since he came to the U.S. with his parents eight years ago. Now 25-years-old and a U.S. citizen, he sees disastrous results for the Armenian families affected by the councils’ decision.

“The economy is so bad that you can’t even save money,” he said. “You’re working to barely support your family.”

Comments around the web, on social media sites like Yelp as well as Asbarez, an Armenian-American newspaper published by ARF highlight customer’s unhappiness with the cab companies in Santa Monica.

“If you like your life and your money, never ever ride with this cab company!” wrote a user named Mark Q. on the business rating site Yelp! about V.I.P Yellow Cab. The commenter alleges that the driver overcharged him, refused to listen when told he was going the wrong way and illegally drove them to the L.A. Colosseum, as he wasn’t permitted to operate in the Los Angeles area.

Another comment left by a user named Sevag on an Asbarez article alleges high fares.

“If the driver is Armenian, I will guaranteed be charged almost double the fare,” he wrote, adding on another note that he supported the anti-discrimination rally because he was Armenian.

The City Council’s report however points out that all companies that submitted proposals demonstrated that their ownership and principal investors of record were of good character and background and no evidence of wrongdoing was found, not making it a factor in the council’s ultimate decision.

Torosyan says that there are so many Armenian taxi drivers in the city that it’s difficult to put blame and pinpoint the wrongdoings of individuals.

While drivers will need to figure out what to do come 2011, the profession of taxi driving is chosen by many Armenians out of necessity, not choice.

“It doesn’t seem to me that there is anyone in our Armenian community who is happy driving a taxi, but people still have to work,” Injyan said. “It’s clear that this isn’t a very good job, but it’s what it is.”

Injyan, who is thankful to the ARF and other Armenian organizations that stood by the drivers and their families, misses Armenia, but came to the U.S. because of economic difficulties in the landlocked country that has a poverty rate of over 20 percent.

“We came here to have a better life,” he says. “How can you survive in America without working?”