The following is a part II of a translation of Aksel Bakunts’ “In Akar” by Nairi Hakhverdi. The story follows a poor young girl who is forced into marriage, gets pregnant and then initiates a miscarriage. Part I can be found here.

A handkerchief hangs on a tree near Geghard Monastery in Armenia. Legend says that a wish will come true after the handkerchief is tied to a tree branch/ © ianyanmag

The next day, Ghazakh’s Ohan sent his wife to examine the girl. Shahan bathed Sandukht and carefully braided her blond hair. Ohan’s wife approved of Sandukht. Before coming into the house, she had taken a look at the threshing floor and hayloft.

It was Saturday when Ghazakh’s Ohan, his son, Shahan, and Sandukht went to the civil registration office to register. The documents for selling the threshing floor and hayloft had been prepared the day before.

Sandukht was wearing a new dress. Whenever the wind fluttered the flaps of her dress, her heart grew wider. But as soon as she saw Ohan’s son, her joy would instantly subside; she would pull back and draw into her coat like a snail’s tentacles. There was a dark and uncertain doubt in her heart, but with that doubt there was also happiness at having come all this way holding on to her mother’s dress, leaving Akar behind the forest. How big the world seemed to her, and how close the mountains in front of her!

Then the unexpected happened. A doctor called Shahan and Sandukht into his office. The young girl timidly removed her dress. Through his spectacles, the doctor saw the girl’s emaciated shoulders, her flat chest, and her snow-white body. Shahan attempted to lie by telling the doctor that her daughter was full-grown, that the priest had gotten it all wrong, that Sandukht had been ill, and that that was the reason why her body was not developed yet, but the doctor was speaking in the name of the law and tried to persuade her that it would be bad for the girl.

Sandukht understood, and when she buttoned up her dress, put on her sandals, and walked out holding on to her mother’s dress, she saw how the doctor shook his head. At the door, Shahan got angry with her daughter for clinging on to her dress like a suckling.

Ghazakh’s Ohan learned about the law, raised his eyebrows, then suddenly squinted. And, in that same second, he decided to break the law, to jump over it as if it were a narrow stream, and to put a lock on Hanes’s daughter’s hayloft.

On the road, Sandukht was walking ahead, Shahan and Ohan were walking together, and Ohan’s son was trailing behind them all. Ohan’s son was sluggish and dull and had heavy bones. When he spoke, his lip drooped, forming a gutter in one corner of his mouth from which drool dripped down. Whenever he looked at Sandukht, at her striped dress, the drool dripped faster from the lip’s gutter.

On the road, Shahan told Ohan what the doctor had said about waiting. But Ohan curtly announced that he did not want to wait. Poor girls and ruined threshing floors and lofts were a dime a dozen in Akar.

“Have them live together, and when she’s grown, we’ll register them. How’s the law to find out? You sign the agreement…”

And that’s exactly what they did. Sandukht was deceptively brought to Ohan’s house with tears in her eyes. Her mother stayed with her until morning, promised to visit her every day and threatened to beat her, and then the mother cried, too. At dawn, Sandukht broke her promise and looked with fear at Ohan’s son, who was lying by the wheat sack, snoring. 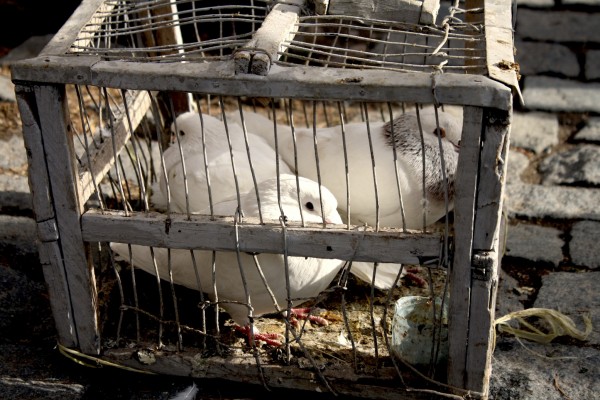 Sandukht cried again on the following night, but bowed her head to Ohan’s son on the same pillow. In the morning, pale and teary-eyed, she ran to her mother’s and wrapped herself around her, but her mother took her back to Ohan’s and tried to persuade her once again.

Four months passed, but for Akar’s history the four months felt like four seconds. The villagers still ate lentils and the renovated hayloft had not altered the overall sight of the village one bit.

Sandukht had come to terms with her situation. She remained silent. When someone asked her a question, she replied by nodding or shaking her head. It seemed as if she neither had thoughts, nor desires. She was like a squeezed-out lemon—an object without life. She had retreated into herself and no longer went to her parental home.

And then one day, she felt something move under her bosom. She got scared, pressed her hand against her heart, and calmed down. The feeling under her breast disappeared like a ripple. A few days later, however, it moved again, and this time she suspected something.

Sandukht was to become a mother. Her body contracted all her muscles and collected all her water to adapt itself to her new condition. She resembled a small apple hanging from the branch of an apple tree which the sun had given a red color, but the thin branch had not been able to provide with any water for it to grow and ripen.

On her way to the well one day Sandukht met another young bride who taught her how to have a miscarriage. Sandukht was afraid at first, but later, when she bent over to put the pitcher on the ground and felt the movement under her bosom again, a resoluteness came over her.

She did as the young bride had explained. She did not eat for two days and on the third day she drank the juice of a yellow flower. When she started feeling unbearable pains in her belly, she pressed her lips together, clenched her tiny fists, ran to the barn without being seen, and closed the door. She now had to hit her belly with a stone to make the pain go away…

The cattle were driven back to the barn in the evening. When Ghazakh’s Ohan opened the barn door, he saw blood by the door and an unconscious daughter-in-law.

He carried Sandukht home. At dawn, however, Sandukht’s final drop of blood flowed out her body with her last breath.

Shahan cried at her grave and at home.

That night, one of her hair-locks turned gray.

This translation is part of a series written in honor of International Women’s Day and Month.

He wrote prolifically between 1926 and 1937, with his first bundle of short stories appearing under the title “Mtnadzor” or “Dark Valley,” chronicling rural Armenian life just before and after the Communist Revolution. In 1937 he was arrested by the Stalinist regime on charges including nationalism and estrangement of socialist values. He was executed by firing squad after a twenty-five-minute trial. His works were banned in Soviet Armenia until the 1960s.