By Contributor January 13, 2010 in The Melting Pot

Although the Haitian capital of Port-Au-Prince is more than 6600 miles away from Yerevan, Armenians perhaps best can understand what the people of Haiti might be going through, as a 7.0 earthquake struck the Caribbean country late Tuesday afternoon, causing mass destruction and casualties, much like the 1988 Spitak Earthquake which registered at 6.9 on the Richter scale and resulted in 25,000 deaths.

The worst earthquake to hit the region in more than 200 years, witnesses reported damaged buildings, including the president’s residence and the collapse of a hospital, however there have been no estimates of the dead and wounded Tuesday evening. CNN quoted U.S. State Department spokesman P.J Crowley as saying that they department was told to expect “serious loss of life.”

Much like the Iran Election, social media is playing a more important role than ever in major news events, including the Haiti Earthquake, where those affected by the quake and others posted messages and photos from the disaster. Raw photos can be seen from two Facebook groups – “Earthquake Haiti” and “Haiti Earthquake!” where horribly damaged buildings and people scrambling in the streets can be seen. A temporary site called “Haitifeed,” carrying videos and graphic images has also been set up. 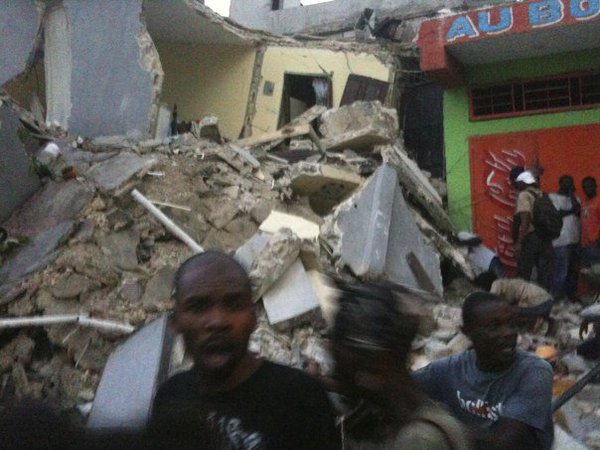 Haiti is also still experiencing aftershocks as of this posting, as Twitter user @fredodupoux noted.

“Was in the streets during that last after-shock,” he wrote. “People were terrified, screaming and running in every possible direction.”

About 45 miles away from Cuba, Haiti remains the least developed country in the Western Hemisphere and the poorest in the world, according to the U.S. Department of State.

The Spitak Earthquake took place 21 years ago, yet Armenia is still suffering its effects, according to Global Voices in a thorough post about the devastating effects the earthquake has had.

Yet, despite a huge inflow of money from international donors for reconstruction, conditions still remain harsh more than two decades on with thousands still living in domiks — temporary accommodation such as simple shacks or even metal containers. Precise numbers for the number of families in Armenia’s second largest city of Gyumri still living in such a situation are still unknown, but it is believed to be around 4-7,000.

How You Can Help:

Correction 9/16/10: References to Hagop Angaladian’s writings about his time in Port-Au-Prince have been removed at the request of wife, Salpi Bechlian Angaladian who informed ianyanmag that references nor his articles can be used without prior approval from his estate, including the fact that they need to be reviewed by the family lawyer.