By Contributor January 15, 2010 in Armenia, Society, The Melting Pot 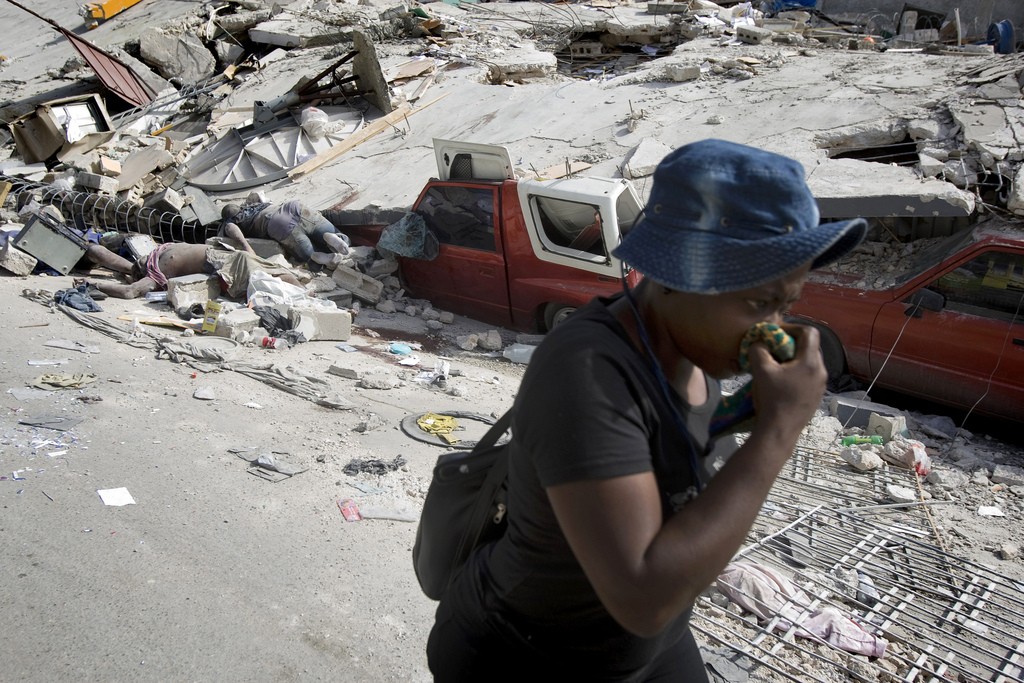 A woman walks bodies pulled out from the rubbles of a building that collapsed after the earthquake that rocked Port au Prince on January 12 .Creative Commons/by Marco Dormino/The United Nations

In the wake of the magnitude 7 earthquake that struck only 10 miles from Haiti’s capital, Port-au-Prince on Tuesday, Armenia, who is all to familiar with the disaster after an earthquake and several diaspora organizations are sending help to the Caribbean country.

Nikolay Grigorian, a spokesman for the Armenian Rescue Service told RFE/RL that a 52 person team will be sent to provide assistance to Haiti, adding that it was not possible to stay away from contributing to the relief and rescue effort having felt firsthand the devastating aftermath of the same natural disaster.

“Our rescuers will fly to Moscow today and proceed, on a Russian Emergency Situations Ministry plane, to Haiti where they will take part in search and rescue operations,” Grigorian said. The Armenian rescuers will have search dogs and special equipment used in such operations, he said, adding that they will likely stay in Haiti for at least six days.

The Fund for Armenian Relief (FAR), a humanitarian aid group headquartered in New York with offices in Yerevan is also collecting contributions through their secure donation page by working with the National Council of Churches. The organization cited the 1988 Spitak Earthquake which has left the victims in

“Over these past two decades, the memory of our sorrow in 1988 has been re-awakened several times, when natural disasters have struck our fellow human beings in other corners of the world. A sense of solidarity in suffering has inspired FAR family, our compassionate people to provide aid to these fellow victims of devastation,” FAR wrote in a blog post.

“This week, another such tragedy has taken its toll—this time on the island nation of Haiti. In a region already beset by difficulties, this natural disaster has been especially destructive, and the images coming out of the news have been terribly disheartening. Today, we are appealing to you to donate to the relief of this disaster.”

In His Shoes, a Los Angeles based Christian Armenian organization that rallies support for those suffering in the world and created in response to the acts of the Armenian Genocide was also accepting donations through its website.

“Today, we’re asking Armenians to walk in the shoes of the victims of the Haitian Earthquake. Donate generously through In His Shoes. All funds go directly to IMMEDIATE earthquake relief. It’s the same pain, just a different place.”

Many also took to Twitter to express how the earthquake in Haiti brought back memories from 1988.

“The earthquake in Haiti is as bad as the 1 in 1988 in Armenian. I was JUST born when it happened, but my family suffered from it,” wrote viktoryamusic.

“Having flashbacks to the 1989 earthquake in Armenia (measured 6.9 on the Richter scale) as I watch images of all the damage in Haiti.”

Emergency aid has finally arrived in Port-au-Prince, however there was little evidence of aid in the ruined capital, reported the Los Angeles Times, who also mentioned that aid officials said the risk of violence and looting would increase as the already small amounts of food and water run out and those who are injured fail to get medical treatment.

Aid has also poured in from all over the world through donations, many of which came through mobile donations by texting special codes that added on $5 to $10 on your next phone bill. Yele, musician Wyclef Jean’s Haiti relief organization and The Red Cross participated in the mobile donations.

“In the 48 hours since earthquake in Haiti, you have donated nearly $35 million. Thank you for this unprecedented outpouring of support,” The Red Cross tweeted.