By Contributor November 21, 2009 in Features 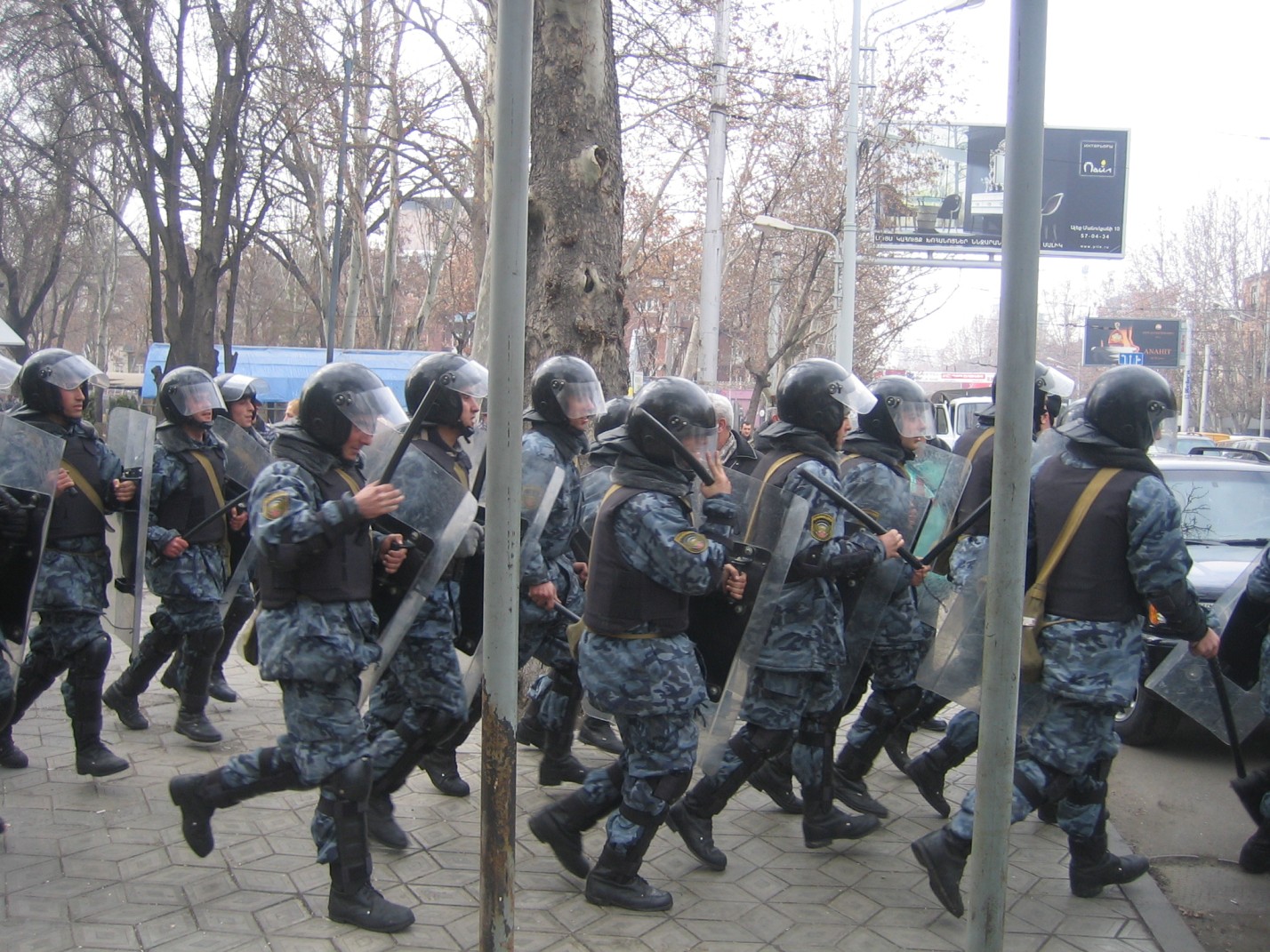 The 11th day of Armenian presidential election protest in March 2008. The peaceful "camp-in" protest in Yerevan was violently ended by special forces which used truncheons and electric shock devices to disperse the crowd of 1,000. In this picture, taken around noon, a group of riot police march in formation in and around the square in a show of force.Wikimedia Commons/By Serouj

The South Caucasus, along with the Middle East seems to be a perpetual hot bed for human rights violations, a major problem that continues to escalate in these war torn and economically unstable regions.  Though the issue extends to the citizens in those regions, they have spilled over to activists as well as journalists, which isn’t anything new, judging by the numerous reports coming out of these countries, including the fact that Iraq was the deadliest nation for the press in 2008 for the sixth consecutive year. A new trend however, according to nonprofit organization, the  Committee to Protect Journalists is the fact that bloggers have been increasingly coming under attack. The power of blogging and social media to bring about discussion and commentary on important social issues is a big threat to governments where change comes slowly. Unfortunately those who use it have come under overwhelming oppression. Here is a round up of human rights cases in the region that require attention.

The Case of Mariam Sukhudyan – from April to June 2008, Mariam, along with a group of young people volunteered at Nubarashen Special School in Yerevan. Overtime, as the group’s interaction with the kids grew, they allegedly witnessed a number of abuses taking place at the school, including unsanitary conditions, underfeeding, child labor as well as physical and sexual abuse. Later that year the group went public with the allegations on Public Television Channel H1 and three months later, police opened a criminal case. In August 2009, the police charged Mariam Sukhudyan with false report that was accompanied by a 5 year prison sentence. Sukhudyan is not tied to any party or organization, but is simply an environmental activist who has protested copper and molybdenum mining in the north-east of the country at the expense of Teghut Forest, which is inhabited by animals and plants registered in Armenia’s Red Book of Endangered Species. Her environmental activism work might have caused her to be targeted by authorities trying to silence her efforts. She is now confined to Yerevan and cannot continue her work in Teghut.

Tigran Arakelyan – On July 1, 2009 policemen in civilian attire and guns attacked around 30 young opposition activists in Armenia who were distributing fliers on an upcoming opposition rally on July 2. Three activists were beaten and taken to the hospital. Tigran Arakelyan, one of the youth activists, was subsequently arrested on July 5 by Armenian Police and charged with hooliganism. Although Arakelyan was finally released four months later in October ,  his jail time was replaced with an ordinance that would ban him from leaving the country.

More about human rights in Armenia in an Amnesty International Report.

Emin Milli and Adnan Hajizade – While Emin Milli and Adnan Hajizade were having dinner in downtown Baku in July 2009, they were approached and severely beaten by unidentified persons. In an unfortunate and strange twist of events, they two youth activists and bloggers were themselves detained after complaining to police about the incident. According to an eye witness, those who beat the activists apologized at the station and were released, but Milli and Hajizade were detained for 5 months until their trial on Nov. 11 in which they were found guilty on charges of hooliganism and violence. Hajizade received a two year sentence, while Milli will serve two and a half years. With Reporters Without Borders, Media Helping Media as well as Amnesty International condemning the unfair trial with fabricated testimonies, incorrect documents and refusal of the court to view video footage from a security camera,  Milli and Hajizade plan to appeal the decision, which is being seen as a power struggle between the government and youth activists within the country. The entire incident most likely stems from a satirical video made by the men in June 2009, in which the Azerbaijani government was criticized. 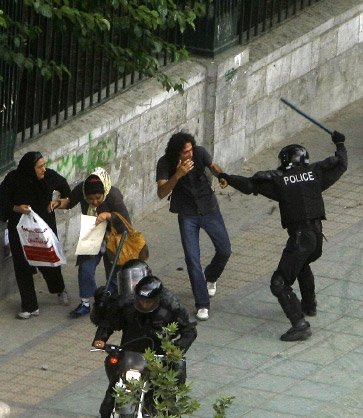 With the aftermath of the Iran Election this year, to cover all of the human rights violations that fall under this country would take a few entries, however there are a few documented by Human Rights Watch that deserve attention.

Sexual Abuse in Prisons – Youth activist Ebrahim Mehtari was arrested on July 26 and released on Aug. 1, however on Aug. 19 he was abducted from his workplace, severely beaten and sodomized with a baton or stick. He was dropped off in Tehran on Aug. 24 with his hands and feet tied and bleeding. When he was taken to a hospital and treated, the hospital authorities destroyed his medical record after finding out he was released from prison, but his father was able to make a copy before they were destroyed, Mehtari told HRW. Another activist named Ebrahim Sharifi told HRW that he had been raped in detention while being handcuffed, tied and blindfolded.  He was told by officials that if he spoke out about the case, his family would be in danger. Maryam Sabri was arrested on July 30 during the commemoration of the 40th day after the brutal killing of Neda Soltan. Sabri was arrested after her photo appeared on a website connected to the Revolutionary Guard that posted pictures of protesters and asked them to be identified, reported HRW. She was raped four times by prison guards before she was released.

Ehsan Fattahian – Ehsan Fattahian, a Kurdish activist who was arrested in July 2008 and sentenced to 10 years in prison for his affiliation with the banned Kurdistan Independent Life Party was executed on Nov. 11, 2009.  During the appeal process, his prison sentence was changed to execution for being an “enemy of God.” The execution was carried about despite appeals from human rights organizations and activists and the fact that none of his activities were proven to be violent or connected to any violence. Although he was brutally tortured while in custody, he refused to confess to allegations that he helped carry arms or participated in an armed struggle. Fattahian was one of 12 other Kurdish political prisoners in Iran who have been sentenced to death after torture in detainment. In a final letter just before his execution, that was published by the Committee for the families of Kurdish Political Prisoners, Fattahian wrote:

I don’t want to talk about death; I want to question the reasons behind it. Today, when punishment is the answer for those who seek freedom and justice, how can one fear his fate? Those of “us” who have been sentenced to death by “them” are only guilty of seeking an opening to a better and fair world. Are “they” also aware of their deeds?