By Contributor May 24, 2010 in Arts & Entertainment, Features 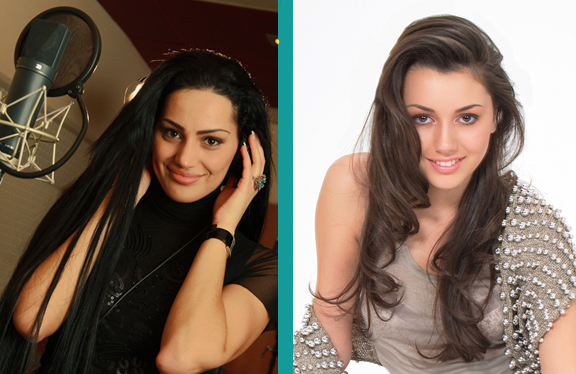 Eva Rivas (left) will be representing Armenia, while Safura represents Azerbaijan at the 2010 Eurovision Song Contest in Oslo. Courtesy Eurovision.tv/ By Respective Broadcaster in Studio and Nicola Chessa

Kitsch lyrics, super sleek pop stars in shiny outfits that can be seen planets away and the silent sound of oozing cheese can only mean one thing in the spring time: Eurovision is here.

Yes, the best and worst (well, maybe just the worst) of 39 countries have gathered for another year of frills and thrills, including  Eva Rivas and Safura, representing Armenia and Azerbaijan respectively. The ladies will go head to head in the competition which will have two semi-finals leading up to the final on May 29 in Oslo, Norway.

Both countries are favorites to win along with a few others, with Azerbaijan’s Safura leading the pack.

Representing Armenia with “Apricot Stone,” Eva Rivas was born in Rostov-on-Don in Russia and was a part of the “Arevik” ensemble for eight years. She’s currently working on an album that will include the songs of Sayat Nova. Dubbed as the Armenian Angelina Jolie, Rivas’ song was  composed by Armen Martirosyan, composer of Andre’s “Without Your Love,” which was Armenia’s first foray into Eurovision and written by Karen Kavaleryan, who has participated six times as a lyricist for different countries in the contest.

Apricot stone,
Hidden in my hand
Given back to me
From the motherland
Apricot stone,
I will drop it down
In the frozen ground
I’ll just let it make its round

While Rivas’ has a strong voice and even stronger looks, the most exciting part of her performance will come in the form of renowned duduk master Jivan Gasparyan, who will be seated on a stone, playing the duduk. His presence marks an exciting new record for Eurovision, as he will be the oldest person to be featured in performance.

In anticipation for her performance, Rivas has been traveling over Europe and spreading some apricot seeds – literally. Just last week, she visited France, where she planted an apricot tree at Chambovet park in Lyon. Apricot trees by her and her team were also planted in Thessaloniki, Greece and in Cyprus.

Across the border, Rivas faces some amazingly tough competition in the form of Safura Alizadeh who will be representing Azerbaijan with “Drip Drop,” a love ballad that is dripping in Western-infused touches – from her choreographer  JaQuel Knight, the mastermind beyond Beyonce’s hit “Single Ladies” video to director Rupert Wainwright, an English film director whose film, “The Fog,” was incidentally rated as one of the 100 worst movies of the past decade by Rotten Tomatoes.

Unlike Rivas’ culturally infused song, “Drip Drop,” written by Anders Bagge, Stefan Örn and Sandra Bjurman is as sleek and smooth as they come – from the back up dancers, to her dazzling outfits and lest we forget the flying diamonds, rain and underwater sequences in her video.  Songwriter Bagge has written and produced songs for heavy hitters like Celine Dion, Madonna and Jennifer Lopez, however “Drip Drops” lyrics fall short.

Tell me where have you been?
Why are you late?
You smell like lipstick again
Come on, answer my question!
Say something.
Why are you acting out?
Oh, say it’s in my head…

And as Eurovision devotees know, “falling short” in the spectrum of music in the real world, only means you’re bound to rise to the top of this over the top spectacle of mediocrity.

This is not a bad thing. In fact, in turns out, it’s a great thing:  betting agencies favor her enough to predict she will win the contest, according to Will Adams, editor-in-chief of Eurovision Song Contest blog, wiwibloggs.com.

While most of Europe will gather this coming weekend to revel in the all the glorious glory of Eurovision, it seems as though a cheesy song contest never is just a song contest as Global Voices Caucasus Editor Onnik Krikorian reflects in a post about the contest’s effect through social media, which reflects the realities of the region outside of the Eurovision pop bubble.

Unzipped also has a round up of subjective comparisons of both Eva Rivas and Safura, grading details such as dress and moves, which as any Eurovision lover can tell you, are important.

Watch videos of Eva Rivas’ “Apricot Stone” and Safura’s “Drip Drop” below, and look out for more of Eurovision to come on ianyan.