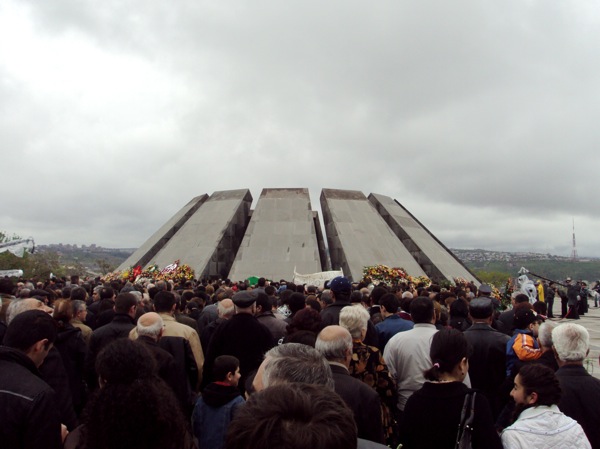 A crowd at the Armenian Genocide Memorial in Yerevan on Sat. April 24, 2010/ © Ashley Killough

I first learned about the Armenian Genocide nearly three years ago from an Armenian professor at my university. I mostly felt disturbed—not only by the tragedy, but by the fact that I was 20-years-old at the time and was just now learning about it. How could such an event be omitted from my primary education? How could we study the Holocaust so much, yet neglect the Armenian Genocide?

In my awakening of world horrors, I had to accept that it was impossible to study all the injustices from the last century. But the Armenian Genocide is still relevant, 95 years later. Its memory still serves as a wedge between two countries, involving the mediation and attention of world powers. It’s the subject of many debates, many controversies.

But for people like me, people who have no familial ties with Armenia and have no influence or power in the world, the only thing we can do is reach out a hand and say, I’ll cry with you, today. I’ll remember with you. I’ll
reflect with you. Politics aside, I’ll honor the legacy of your fallen. To me, Remembrance Day is not just for Armenians; it’s for all of us who wish for the world to be rid of inexplicable evil.

On Saturday, I had the privilege to attend the memorial service in Yerevan. This was my experience, and these were my thoughts.