By Contributor November 11, 2009 in Armenia, Society 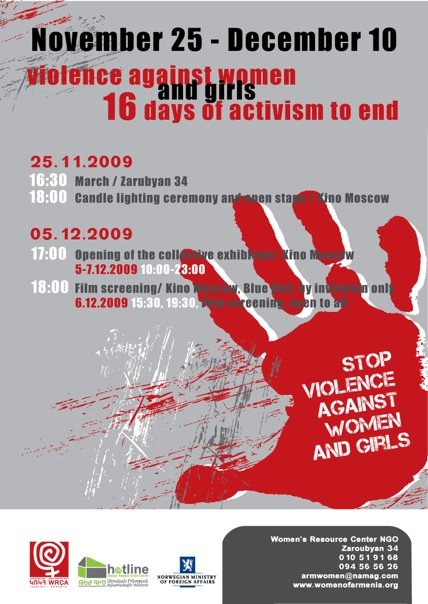 The Women’s Resource Center (WRC) has announced 16 days of activism to end violence against women and girls to raise awareness about domestic violence issues in Armenia.

The campaign will begin on Nov. 25 with a march that coincides on the International Day for the Elimination of Violence Against Women by the United Nations.  Workshops, a collected art exhibition on violence against women, a film as well as presentations around the pertinent issues will also take place throughout the end of November to Dec. 10.

“We are marching again on the streets of Yerevan and breaking the silence around violence against women by raising our voice and concerns on the issue,” the WRC wrote on its Facebook fan page. “We will also hold a candle lighting ceremony in the middle of the city in memory and in support of all the women and girls violated, battered or harassed in their own homes, in our institutions or on the streets.

This spurt of activism is much needed in a country where 66 percent of those surveyed in May 2007 by the Women’s Rights Center acknowledged that family members subjected them to psychological abuse and 39 percent considered themselves victims of either moderate or severe physical abuse.

Although rape is a criminal offense, there are no explicit laws criminalizing marital rape or domestic violence. Because of the fear and shame involved in domestic violence, most cases go unreported by women.

The attention to such cases are poor on the authoritative side as well, according to a  2008 report released by Thomas Hammarberg, the Council of Europe’s commissioner for human rights. The report noted that although there is a police unit that specializes in domestic violence, but NGOS have reported that police officers were reluctant to communicate with female victims and that the number of female police officers continue to be insufficient.

Since November 2006, the WRC has held book, film and career development clubs as well as training on sexual rights and health, parental skill and pre-natal programs and workshops surrounding the issues of women and gender. This grassroots organization looks to empower women in Armenia with knowledge and skill to fight abuse and discrimination throughout the country in a bevy of situations. It recently hosted a prenatal seminar conducted by a midwife that addressed pregnancy and childbirth choices, as well as post-partum depression