By Liana Aghajanian May 6, 2011 in Armenia, Diaspora 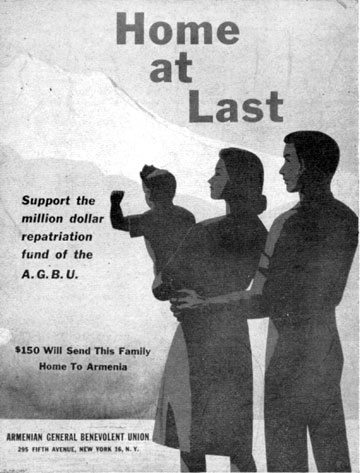 A poster released by the AGBU to promote a repatriation fundraising drive in the mid-40s./ © AGBU

Diasporans are always longing for their homeland. They write songs about it, fantasize and romanticize, organize events around it and hang paintings of Ararat in their cushy homes in Los Angeles, Boston and Montreal. “Mer Hayrenik” they sing. “Our Fatherland.” Yet it seems those in “Our Fatherland” are doing whatever they can to quite literally escape.  Armenia is hemorrhaging citizens. More Armenians live outside of the country than in. People are hoping to leave any which way they can.  In fact, as many as 60 residents a day apply to a company that arranges permanent residency in Russia, according to this recent Hetq article, Russia Baits the Hook: Armenians Leave for the “Promised Land.”

For many, there is no future in Armenia. The motherland is best loved from afar, they say.

For others however, the country holds plenty of possibilities, as a segment in Fresno’s KSEE 24 News explored recently.

Armenia has seen spurts of repatriation since the 1920s, where thousands began arriving from Iran, Turkey, Greece, France and Syria and culturally impacted the city with the introduction of coffee to open air summer cafes, according to an article published by AGBU, “Realizing a Dream: Then and Now.” But the first waves of emigration hit soon after the Soviet Union  collapsed, continuing through the 90s, where economic troubles, an energy crisis and the Nagorno-Kharabagh conflict kept Armenia in dire straights. Scientists, engineers and specialists also saw demand for their skills abroad and survivors of the Spitak earthquake who received little help from their government relocated, the article goes on to say, also highlighting that the challenge of Armenians moving back in present day can be daunting and discouraging, even with the creation of the Ministry of Diaspora.

Well into its second year, the ministry has notably supported programs encouraging participation of the Diaspora in Armenia’s life. Its activities often seem to fall under cultural or foreign-affairs objectives, however, and the long-range mission of the ministry remains somewhat obscure. No state program on repatriation has been created.

Lacking in export commodities, and bound by natural as well as man-made impediments to successful commerce, Armenia’s hope to emerge from struggle to self-sustenance is inexorably linked to its stalwart resource—its Diaspora. A state strategy for Armenian repatriation, then, would seem a natural priority, which is currently conspicuous by its absence.

A dwindling population is alarming for officials, but would it change if the mystery of actually living in and making it in Armenia could be revealed, or at least be comprehensively examined? Making the decision to move to the Caucasus, until now has kind of been like being taught to swim by your uncle. You get thrown into the deep end, with no one to depend on except yourself. It’s a sink or swim situation.

There have been websites here and there, as well as blogs who have touched on tips, suggestions and experiences to help others thinking of relocating, but much of the information seems incomplete and at times scattered.

This is where you come in. If you have spent a considerable amount of time living in the Republic of Armenia, we need your help. We’d like to establish a database here at Ianyan exploring the ins and outs of what it really means to live in Armenia and if it’s even a realistic goal. This can range anywhere from a directory of easily to find emergency information, a make-shift version of the business rating website of  Yelp to cultural observations as well as valuable information from locals. This collection of information doesn’t intend to convince people to move to the region, but help provide easily accessed information that could help them make a decision, whether that means the answer is “Yes, we can!” or “Umm, I don’t think so.”

So send us some tips! Email us at editorial@ianyanmag.com, if you’re on Facebook, leave a message on our wall. If you’re on Twitter, send us a reply. What are some tips you can offer to those curious about what it’s really like to live in Armenia? What are the difficulties, the benefits and everything in between? We’re not sure where this project will end, but it wouldn’t hurt to start somewhere with the help of those who have some knowledge to offer.

The Big Picture: Armenia, in Black and White