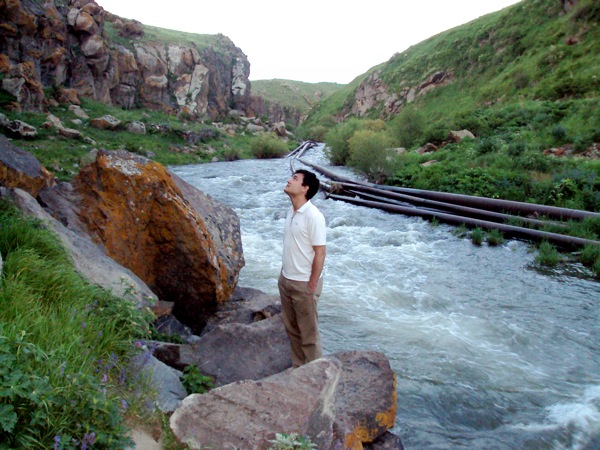 When Danny Lovell, 25, received his country assignment from the Peace Corps, he looked at the word “Armenia” on his invitation—and paused.

Lovell vaguely recalled studying the Soviet Union in high school, but he knew little about the South Caucasus country. “After I looked at the map, I thought it was in the Middle East because it’s located right above Iran, and I thought I was going to live in the desert for two years.”

One month later, on May 29, 2009, Lovell said goodbye to his family in North Carolina and moved to Armenia with dozens of other Americans. For the next three months, the new class of volunteers, the 17th group since Armenia opened its doors to Peace Corps in 1992, underwent rigorous training in language and cultural skills. At the same time, they lived with host families in their “training villages,” where they quickly became exposed to the Peace Corps life—one filled, at first, with bucket baths, outhouses and the tedious task of washing clothes by hand.

In September, the volunteers spread out around the country, where they moved to their permanent sites to carry out their next 24 months of service. In Armenia, Peace Corps Volunteers work on projects and jobs related to business development, education, environment and health issues. Their duties and responsibilities vary widely, but they all have one goal in common: Become part of the community.

Lovell, a health volunteer, teaches wellness and healthy living at the local school in Verin Getashen, a small village—population about 5,000—near the southern tip of Lake Sevan. Lovell also spends his time working at the polyclinic and writing grants for new projects in the village. He’s currently lobbying for an indoor bathroom at the school to replace a worn-down shack the children use as a toilet.

“It’s unsanitary, and there’s no place for kids to wash their hands,” he said. “Having an indoor bathroom goes hand-in-hand with what I’m doing here. It would be a warm place for the children, and it would help decrease the spread of the flu during the winter.”

Having lived in the village for nearly a year, Lovell says he’s happy with his location. But his host family’s house is not a typical village house, he says. When first stepping into his new home last year, Lovell was surprised at the modern furniture and kitchen appliances owned by his new family. He later learned that a now-deceased family member had been working in Russia for years, sending money home for renovations and remodeling.

“That’s not what you have in mind when you join Peace Corps,” Lovell says, referring to his relatively modern living quarters. “When you sign up, you think you’re going to live in a hut. But you come to realize that everyone’s experience is different in one way or another.”

But life in Verin Getashen still comes with plenty of challenges. It took a while, Lovell says, to adjust to the closed-knit village culture, where privacy and anonymity lose against curiosity and inquisitiveness. “Everybody’s related to everybody else, and they kind of want to keep it that way,” he says. “If you’re an outsider, they’re wondering what you’re doing.”

But Lovell says he’s grown to appreciate the constant social interaction of village life. He spends his evenings visiting neighbors and actively seeks to develop relationships with others in his neighborhood.

“I found that if you just went up and introduced yourself and made the first step towards building a relationship, then they were more than friendly,” he says. “And every time you saw them after that, they were very nice and didn’t stare at you.”

While cultural differences can sometimes amount to misunderstanding and intimidation, Lovell says the best way to counter the confusion is simply to talk about it. “Again, all that requires is just taking the time to give some explanation about how your culture works and how their culture works, and how we can work together to figure out how to mesh the two cultures.”