What It Means to Be a Woman: International Women’s Month 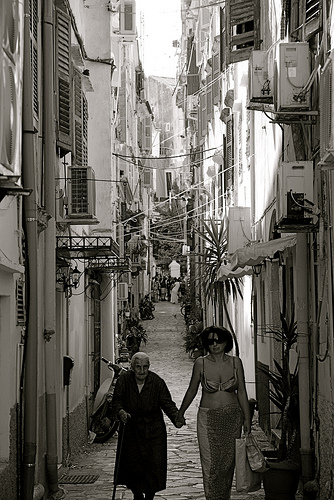 An old Greek woman with her daughter in Corfu. Creative Commons/by Chris Hau

I come from a Greek/Irish family, but being Greek is all I know. The only aunt I grew up with, a belly dancing, motorcycle riding sand dollar collector is now a shy nun deep in the heart of central Greece. She dresses in head to toe black and covers her head with a dark veil. She is Greek Orthodox, but looks Muslim. The dress of a Greek orthodox nun is very similar to that of a traditional Muslim woman, and people don’t know how to handle it. In Israel, they spit on her and in Athens they pretend not to see her.

What does it mean to be a woman?

When we were on a four hour drive out of Athens to a smaller town we made a pit stop. My aunt and I were the ones that asked to stop, but were asked to wait in the backseat of the car until the men were done using the restroom. There were three of us crushed in the backseat, and we needed permission from them to leave the car. They took their time and when they were done, motioned us inside. They said they needed us to stay in the car because we were “watching it” but when we were ready to leave, there was no one watching it. The men decided that was now a boring task.

What does it mean to be a woman?

Years ago, before my Papouli (grandfather) died, I remember going over to show him my acceptance letter to university. Getting into college was my primary goal in high school and I couldn’t wait to tell him. My brothers and sisters are the first in our family on my dad’s side to go to college. His response to my beaming smile and crumpled acceptance letter was confusion. “Why would you go to college? You’re so cute, Mary, you don’t need it.”

My Papouli said this in the nicest way he could. It was nothing against me or my achievement, but it was a very harsh reminder that, to him, I was never expected to get an education. Not that I couldn’t do it, he knew I was smart, but because I didn’t need it.

I guess it never crossed my mind before. Not in the way I am thinking of it now. Being a woman to me was never being emotional or dressing up in ribbons and pink. It was never about being anything in particular. I never really think of myself as a woman. I think of myself as just Mary, and I hate sitting in back seats, waiting for someone to tell me when it’s my turn.

To me, being a woman is starting out on an adventure, and still being able to feel like an explorer. Like you are still venturing down unpaved roads, leaving markers so others can follow.