By Liana Aghajanian December 7, 2011 in Armenia 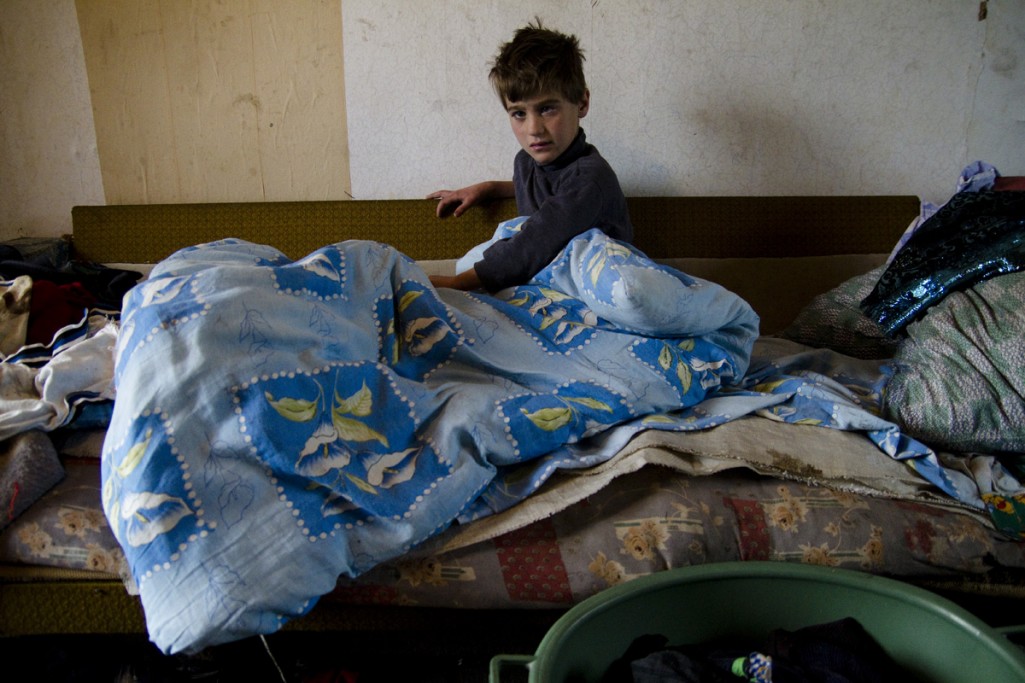 The train from Yerevan to Gyumri took three hours. It was sturdy, but Soviet. Sturdy but Soviet. I sat on its wooden pews, looked at its safety posters with Cyrillic letters I could recognize, but not understand. I imagined myself in one of those grand train scenes in film – the ones filled with smoke, calls from the conductor, long goodbyes and waves from windows that seem to drag on long after the train has left the station.

We rode along Mount Ararat, just miles from the closed Turkish border, passing post offices, small towns, grazing sheep and marshutkas heading back to Yerevan in time for lunch. Then, Gyumri came into view, wearing its heart on its sleeve, and on the buildings still in ruin from a day that changed the course of its history forever. There is something hollow about Gyumri, and yet whole at the same time. The air wafts of tragedy, but the wind reveals its need to go on, despite its sordid circumstances. As I exited the bus station the scenes I had heard about so many times in my head began to play out.

On a winter morning 23 years ago, at 11:41 a.m.,  Gyumri and neighboring Spitak were hit by a 6.8 magnitude earthquake that killed over 25,000, left 19,000 injured and hundreds of thousands of people homeless. More than 20 towns and 342 villages were affected, and 58 of them were completely destroyed, with damage totaling 16.2 billion U.S. dollars, according to the United States Geological Survey’s (USGS) Earthquake Hazards Program. The reports started to come in. “Concrete and stone snapped like brittle twigs, hospitals and schools crashed down on patients and children, and workers were entombed in factories,” wrote David Brand and Ann Blackman, both correspondents for TIME. “Within minutes the city was split apart like an accordion,” and Spitak was virtually erased from the face of the earth, according to Soviet t.v.

“The odors of cremated bodies and those decomposing under the debris mingle in the dust-clouded air,” the Associated Press reported. “Battered trucks and buses have been shuttling coffins, stretchers, food and water to this and other stricken areas, clogging the rutted mountain roads throughout much of the tiny Armenian republic of 3.3 million. ‘What is God doing to us? Does he want the entire Armenian nation to perish,’ Lev Akopian, who was driving a carload of bread and fuel into Spitak told reporter Carol J. Williams.

“Cracks appeared on the walls, stones started falling. Some fell and the running crowd stampeded them…a teacher threw me out of the third floor window. The teacher of Physical Education caught me safely, put me on the ground and asked: “Are you OK?” Then, without expecting an answer, turned back to catch another child thrown out of the window.

“Are you OK?”, asked the teacher of Physical Education to yet another child he caught, and turned to us with tired eyes: “Run home, kids, maybe you’ll find your parents?”

Twenty-three years have passed, but the earthquake still remains with Gyumri, and with Mkrtich, a shoe repairer  I met who runs a humble shop right behind Gyumri’s main square. At 73-years-old, he says he should be retired, but he toils away, preparing a mixture of glue in a shop full of Gyumri’s high heels. His son died in the earthquake, and life hasn’t been the same since. 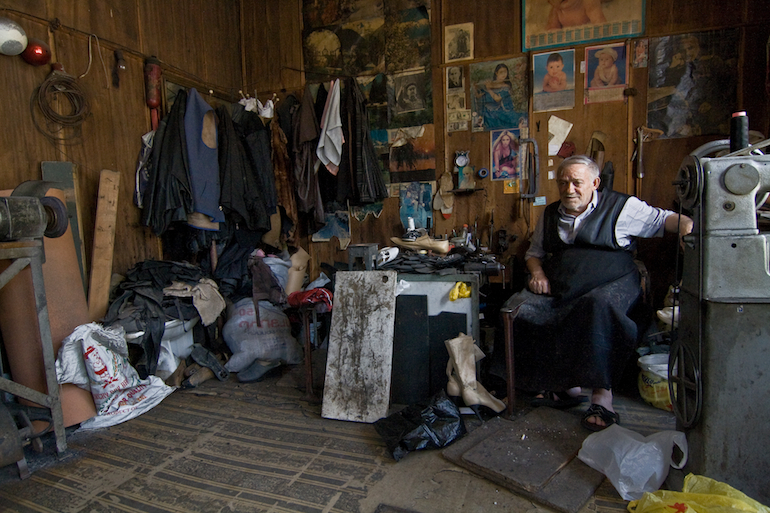 “This town used to be full of life, but now it’s empty,” he says.  “When you go outside and look at people’s faces, they’re half-there, half-gone” he says. He reminisces about Gyumri, then known as Leninakan,  and earlier then as Alexandropol, and how it was one of the jewels of the Caucasus, and now, how first the earthquake and now the country-wide problem of emigration has threatened the city. “Everyone has fled, seeking job opportunities in Russia,” he says. 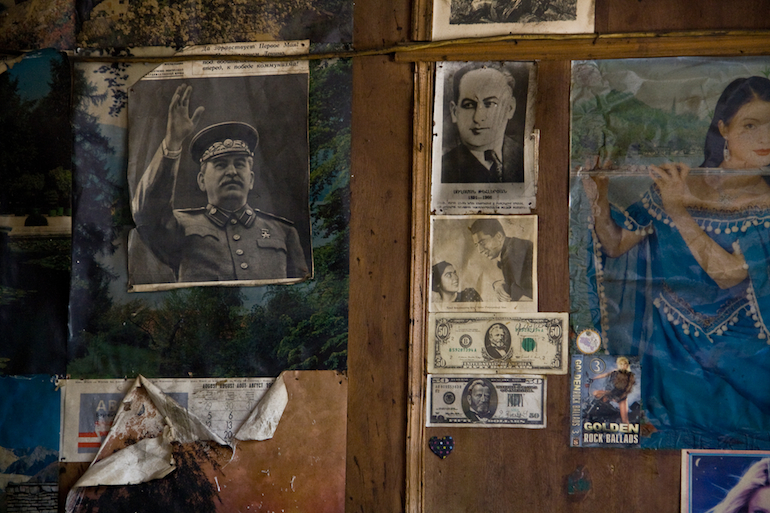 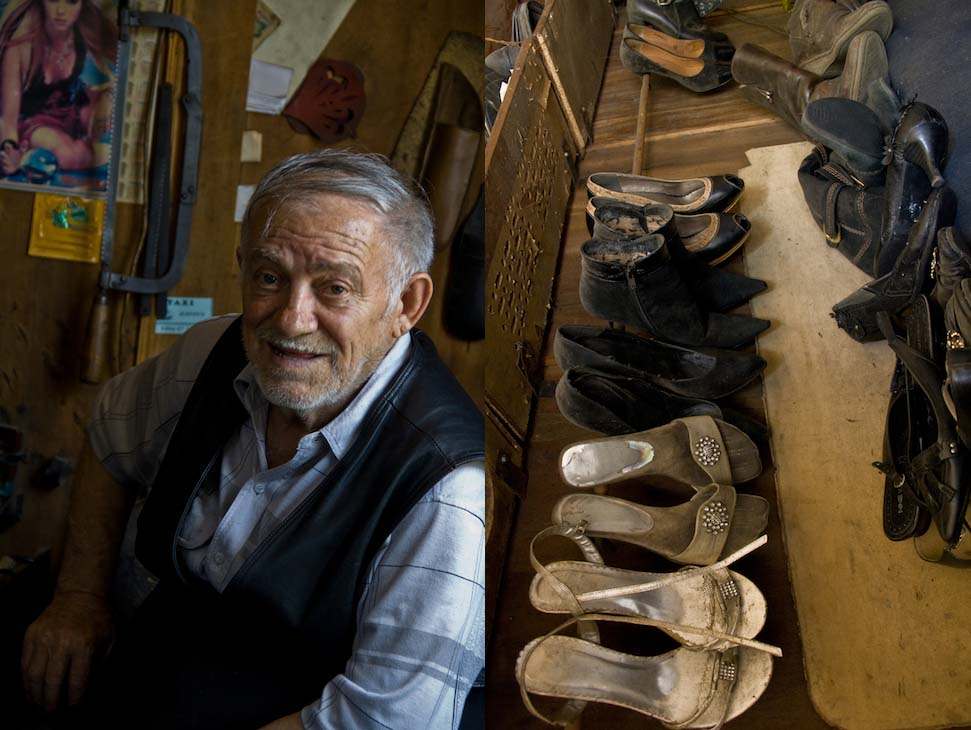 He’s wary of city officials and criticizes the government heavily. He speaks of affluent diasporans like Kirk Kerkorian and Charles Aznavour who have tried to help Gyumri get back on its feet, but whose donations found their way into the pockets of the government instead.

“The current government are a bunch of hooligans,” he says. “There are plenty of good people who could be president but they’re afraid to speak up through fear of being killed.”

Then there was 70-year-old Laura Sahakian, who runs Gyumri’s popular Soviet-era arcade that is frozen in time.She lost two daughters, grandchildren and her husband in the earthquake.  She now works to make ends meet for her and her son and does her best to keep going. “Gyumri was such a beautiful city,” she says with tears in her eyes, holding a keychain with a photo of one of her daughters. “There were so many jobs here. We had fabric, textile and steel factories – even a bicycle factory. Now there’s nothing. They’re talking about emigration every day on the news. If there weren’t remittances [from abroad] how would these people survive?”

Though restoration efforts have being undertaken and despite an influx of money from international donors,  thousands are still left without proper housing, more than two decades after the quake hit. Anush Babajanyan, a photojournalist who has been documenting the housing situation in Gyumri since 2009, visited the domiks again last winter and took the following photographs in Gyumri’s Fountain district and district behind the Bus Station. 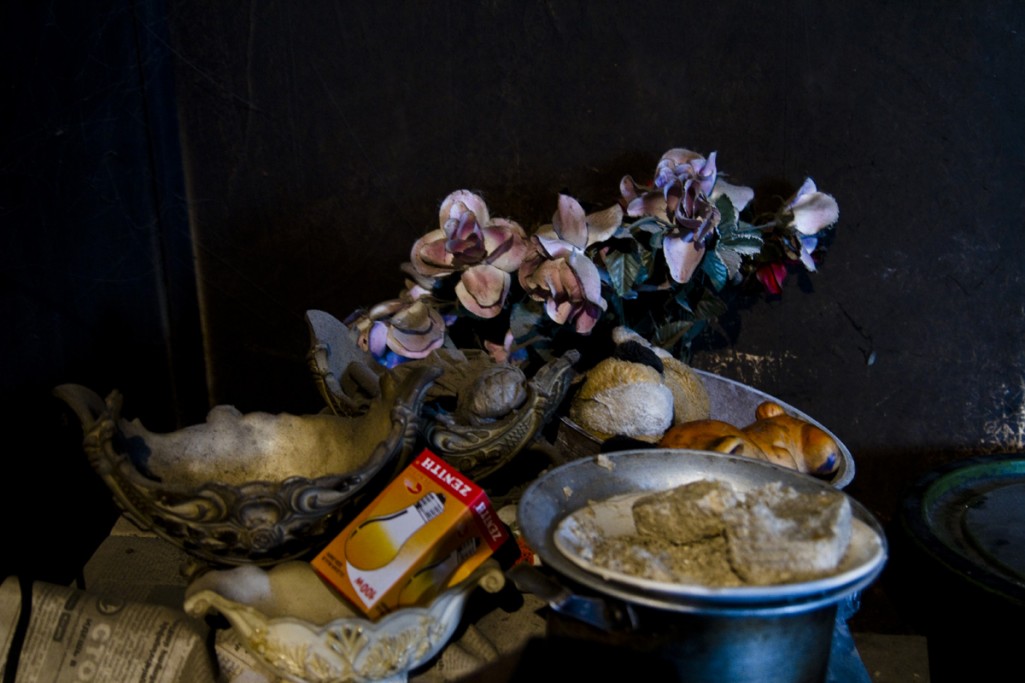 Things haven’t changed much, she says. “About 4,000 families continue to live in domiks. Some have moved to the newly built districts, but many complain about the quality of buildings there. There was a case last year when the ceiling in one of the apartments fell down, and the residents were only lucky not to have been in the room at the moment. So, some families even prefer to return to their domiks.” 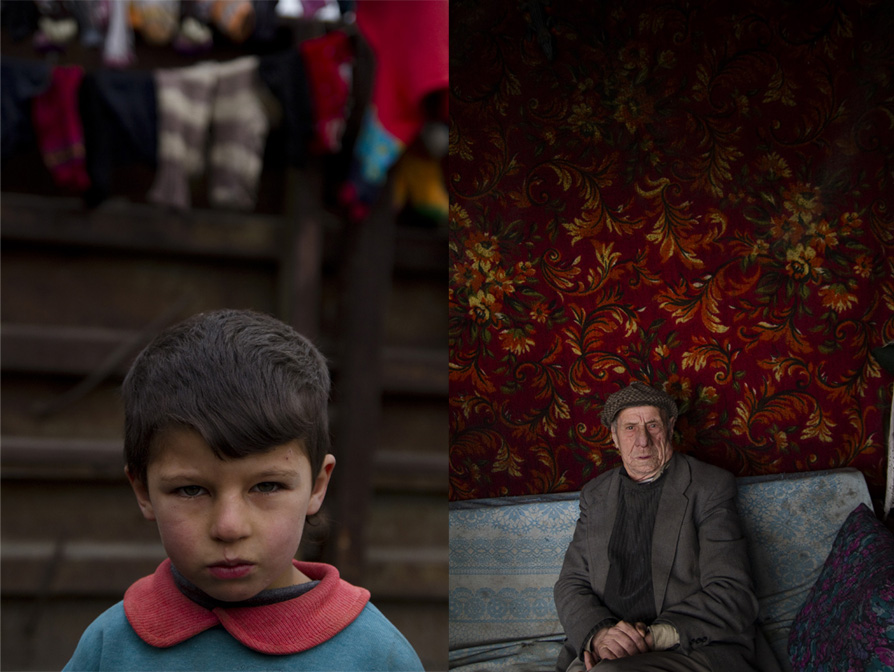 On the 23rd anniversary of the earthquake, Gurgen Namalian, head of an urban construction subdivision of the Armenian Ministry of Emergency Situations told journalists that most residential buildings in Yerevan may not withstand a powerful earthquake and are in need of seismic strengthening, according to Radio Free Europe/Radio Liberty. The death toll in the 1988 earthquake was widely blamed on poor construction standards, the article goes on to say, with many of the apartment blocks in the diaster area crumbling despite being designed for a seismically active zone.

Watch the short film, “Resilience: a film for Gyumri,” by former Fulbright Scholar Talene Boodaghians about Gyumri natives, Mikaelyans, who intertwine personal and historical narrative as they discuss their life in “a remarkable city with a tumultuous past.”