By Liana Aghajanian December 9, 2011 in Diaspora 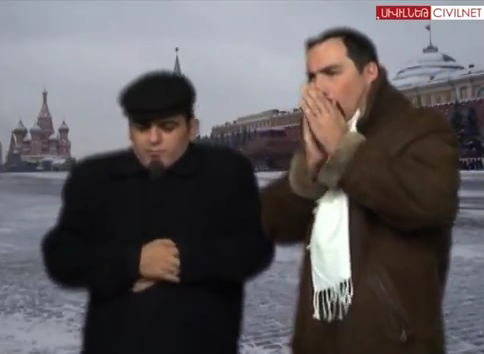 'I Wanna be a Spyurqahay': Dreaming of sunny Glendale in snowy Moscow/ Image via CivilNet

Update 2: The video is back for your viewing pleasure. Click to watch at the end of this post.

I wanna be a spyurqahay. Or do I? That’s what a just released spoof video from the CivilNet media channel of non-profit and think tank Civilitas Foundation tries to address. The four minute video features an Armenian take on “Billionaire,” a hit song by American singer Bruno Mars and Travis McCoy of alternative hip-hop Gym Class Heroes (although he might be alternatively known for dating pop star Katy Perry).

Seated on Northern Avenue in Armenia’s capital Yerevan, a street mocked for its monstrous, lavish and mostly empty sky-high buildings built for Armenian Diasporans who like to vacation in the Republic during summer, Hayk, a lonely, guitar-strutting local Armenian dreams about becoming a spyurqahay, or one of the millions of Armenians who compromise a world-wide diaspora, with high concentrations in Moscow and Los Angeles, or more specifically, the city of  Glendale.

The video highlights cultural differences and social norms between Armenians in the diaspora and local residents, opening the song with the line  “I wanna be a spyurkahay so freakin’ bad, have some facial hair I never had,” an ode to how quickly diasporan Armenians can be spotted and singled out when in the country.

It then launches into a comedic depiction of Armenian lives abroad, where paintings and photographs of beloved Mount Ararat hang on every wall. Thanks to the Armo-rap styling of Narek Markarian and Sergey Sargsyan, better known as the Armenian Comedy duo, we get an explanation of what life as a diasporan who visits Armenia must be like, complete with courteous hellos from taxi drivers who charge inflated rates ($50 in this case) to unsuspecting visitors and the perceptions that wealthy diasporans  (read: all), own two to three houses each, have opportunities to sing with Serj Tankian, of  System of a Down fame, and date perhaps the world’s most famous Armenian at the moment, newly-single Kim Kardashian.

The video has produced a mix reaction on CivilNet’s own public Facebook page. “That’s degrading and insulting to diasporans and local Armenians. Civilitas will do just about anything for a few ‘likes’ these days,” writes one Facebook user, while others are asking what the purpose of releasing such a video might be. Still, many are finding it funny enough to share.

Meanwhile, it seems like many have already fulfilled their dreams of becoming spyurqahays –  egged on by worsening socio-economic conditions and rising poverty levels, Armenia faces a massive emigration problem, that is depleting the country of its population, who are seeking better opportunities elsewhere.