By Liana Aghajanian May 10, 2011 in Armenia, Arts & Entertainment 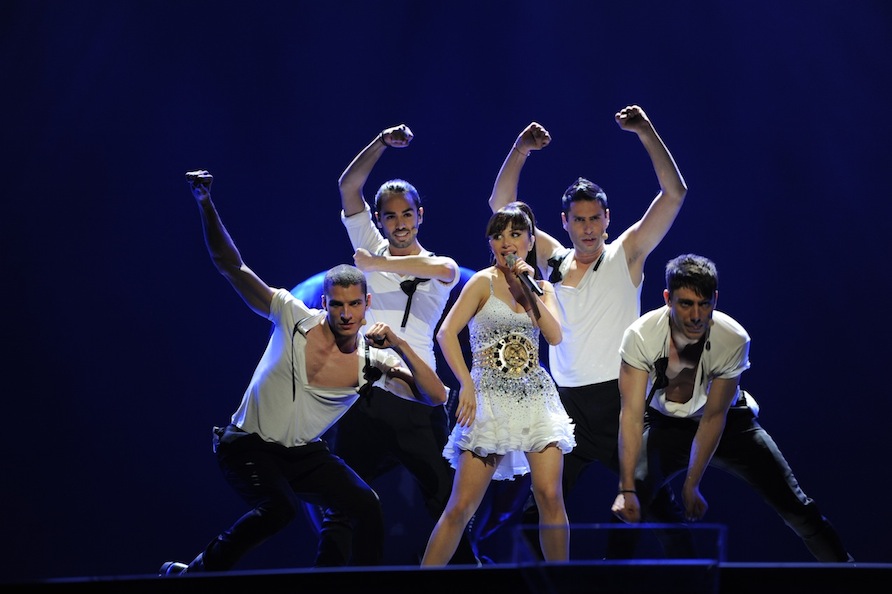 Armenia's Emmy did not advance to Eurovision finals/Photo courtesy Eurovision.tv

For the first time in its participation history, Armenia has not made it through to the Eurovision finals that will take place on Saturday, May 14.

Armenia’s chosen song, “Boom Boom” performed by pop singer Emmy was fraught with controversy and disappointment throughout its tenure, with fans at one point demanding a re-do of the vote that ultimately sent the song to the semi-finals.

On Tuesday night however, the votes ultimately didn’t add up to send “Boom Boom,” with its boxing inspired props and outfits to the next round, while its neighbors, Azerbaijan and Georgia as well as Russia made it through.

The up-tempo song saw Emmy enthusiastically  jumping around to choreography with a group of dancers, a move that might have ultimately led to the entry’s demise – the dancing proved too much for the singer’s vocal abilities to shine through, causing her to run out of breath and resort to slight yelling in an effort to compensate.

Many on social networks predicted “Boom Boom” would go through, the song fell flat as the 10 finalists were announced. Meanwhile, its Caucasus neighbors, Azerbaijan and Georgia won spots in the finals.

The announcement led to surprise reactions from many who were watching the telecast and posting thoughts on social networks like Twitter:

Turkey’s rock infused performance by Yüksek Sadakat which saw a contortion artist locked in a cage on stage didn’t wow voters either. The country stayed behind in the semi-finals with Armenia, while Russia and Greece advanced.

Georgia’s performance from band Eldrine was a favorite, as was Azerbaijan’s “Running Scared” by Ell and Nik, who glided on stage in white outfits amidst strategic lighting and slow choreography. Russia, with style inspiration from Grease and lyrics penned for stalkers everywhere (“I’m coming to get you.Oh oh oh, I’m running I’m gunning for you. Oh oh. I’m gonna get you”) made it through quite easily while Greece brought theatrics, including a bit of rap and towering marble columns.

Whether it was the bad lyrics or just an all around bad performance, Armenia will have to lick its wounds for now. The country’s achieved its highest Eurovision ranking in 2008, with Sirusho’s “Qele Qele” which finished fourth in the finals.  Last year, Eva Rivas represented Armenia with “Apricot Stone,” and came in seventh place in the final.

Emmy poses in a boxing glove as part of her Eurovision performance/Photo courtesy Eurovision.tv

Watch Armenia’s performance at the semi-final below: