The following is a part I of a  translation of Aksel Bakunts’ “In Akar” by Nairi Hakhverdi. The story follows a poor young girl who is forced into marriage, gets pregnant and then initiates a miscarriage. 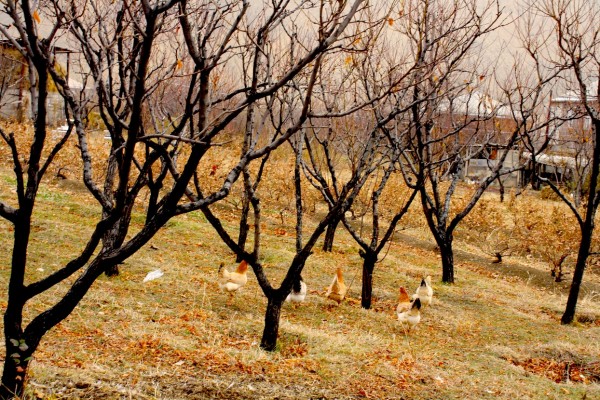 The village of Akar is picturesque, surrounded by forests. In the forests there are ancient oak trees and age-old ruins of monasteries. A clear stream flows under the trees and passes through the village streets where it turns muddier and muddier until it reaches the pastures where it becomes a bog. In the morning a fresh breeze from the forests descends on the village and brings with it a healthy waft redolent of cedar and linden. But when the sun begins to warm up and the garbage heaps in the streets begin to flow, the fragrance that came down from the forests is replaced by the smell that comes out of opened barns.

In the garbage heaps, the heads of worms heat up—worms that harmoniously turn their eyeless heads to the left and to the right, as if they were weaving silk.

In Akar there is scabies, which is aggravated by the sun, and causes those who are infected to scratch their backs against walls or thresholds, and itch themselves with their hands until they bleed. In Akar there is also pink eye, and children walk around blinded by the sun with bloodshed eyes and a dirty cloth over their foreheads. The cows get infected with foot-and-mouth disease and limp as tiny white maggots suck on the blood vessels between their hooves, and the milk in the cows’ udders dries, and the cows lick their hooves in pain, spitting out the maggots with their tongues.

Akar is old, from time immemorial. And from that time it has been a habit to sow wheat in sandy soil, to dig plots of lentils with picks and hunch over them from morning to evening plucking the short pods with bare hands, and then to beat the lentils to have enough to make lentil meals twice a day in the winter or to turn the wheat into buckwheat and eat it with yoghurt.

Akar is poor. And if no one tilled the soil for two years, the forests would swallow up Akar, the winds would scatter the linden’s fruits, the birds would carry acorns to the roofs, and the acorns would dig their roots in extinguished tonirs.1 And if there weren’t forests, a flood from the mountains would wipe out Akar in one night, destroy churns and jugs with stones, and throw an entire house, with hayloft and all, upside down. On the surface of the flood, together with the diseased cows, white maggots would swim like thin slivers.

But there are neither floods in Akar, nor are the forests in the process of engulfing it. As soon as a sprout appears on the plots of lentils, the inhabitants of Akar dig it up with their picks to keep the soil as parched as an emaciated and dehydrated cow.

Of the forty households in Akar, one of them is that of Hanes’s daughter, Shahan. Even though Shahan is aging and has been a widow for eight years, people in the village still call her Hanes’s daughter. This is probably why Shahan’s husband, who was a coal miner, lived in the depths of the forest all year round and only came home at night once in a while, washed the soot off his face, shared a pillow with Shahan until sunrise, and left a few silver coins with Shahan in the morning until his next return. And from that relationship, three girls were born in four years. Their blondness reminded Shahan of her husband and his youth when he was not yet a coal miner and had hair on his head that felt like lamb’s wool.

And then one week her husband did not return, and when Shahan went to the forest to find him, she saw her husband’s thunderstruck corpse lying by the coalmine, scorched and charred like a large sheet of coal. He was buried on the same spot. Shahan carried home his clothes, cried over them, and after her tears subsided, she found three twenty-cent coins in her husband’s trousers.

There was neither love nor hate between them. They had lived under the same roof for eight years and in those years they had become as inured to each other as a horse does to a stable. A winter passed, the leaves of oaks turned green, and when Shahan was planting seeds for someone else, she saw smoke rise out of the depths of the forest from the top of a hillock and, of course, it reminded her of her husband, but she neither missed him, nor had sweet memories.

At night, she locked the doors, put the girls to sleep, and pressed her suckling to her breast and warmed her up. She turned into a brood hen, spread her wings, and under the warmth of her wings, Shahan’s three blond daughters grew up. They had to grow and wait for a winged young man to take the eldest first, then the middle one, and finally the little one, because no bird should bring a sprout under Shahan’s roof.

Eight years passed. Hanes’s daughter was a baker and a weeder and a carrier of firewood. For eight years, the hot tonir had scorched her face. That is why her face glowed like a brass plowshare. She would walk away from the tonir carrying a few sheets of lavash2 under her arm, which she would divide among the girls. The starling feeds her chicks worms from her beak and her feathers also glow even though she has never seen a tonir.

For eight years, Shahan’s threshing floor did not see any chaff. The rain had perforated small holes in the roof of the hayloft causing water to drip on the beams. A spider had spun its web there, and one winter two of the hayloft’s beams collapsed under the weight of the snow and fell to the floor.

Sometimes Shahan would look attentively at her oldest daughter, Sandukht. She wanted to know whether her daughter was growing, or rising like kneaded dough. She wanted to know why her body was developing late, her movements were still childish, and her questions innocent and naïve. Shahan would fish for news in different bakeries, and whenever there was talk of giving and taking girls, she would bring Sandukht to mind. If only she could find a place for her, get her to settle there, so that her load would lighten and she could think about the other two. What if no one wanted her daughters and they turned yellow like seedy cucumbers and remain seedless. But Sandukht had manners, didn’t she? Modest and obedient, with eyes like pale-blue flowers.

And then one day, on the street, when Ghazakh’s Ohan wanted Sandukht from Shahan for his son, without saying anything of her eyes being the color of pale-blue flowers, he asked if Hanes’s daughter would also give him her threshing floor and collapsed hayloft together with Sandukht.

Shahan thought about it that evening and went to ask her brother for advice. Her brother thought it a good idea.

“What do you need the loft for?”

She returned from her father’s house and thought about it again. Sandukht did not understand why her mother stroked her hair, then bent over and kissed her forehead. The scent of fresh lavash emanated from her mother’s bosom, and when Sandukht half-opened her eyes and saw her mother, she was surprised at how much money she had. The moon’s milky ray shone through the skylight and flickered on the silver coins in Shahan’s hand. There was enough to buy cloth for a dress for Sandukht and something more.

This translation is part of a series written in honor of International Women’s Day and Month. Stay tuned for Part II.

He wrote proflifically between 1926 and 1937, with his first bundle of short stories appearing under the title “Mtnadzor” or “Dark Valley,” chronicling rural Armenian life just before and after the Communist Revolution. In 1937 he was arrested by the Stalinist regime on charges including nationalism and estrangement of socialist values. He was executed by firing squad after a twenty-five-minute trial. His works were banned in Soviet Armenia until the 1960s.