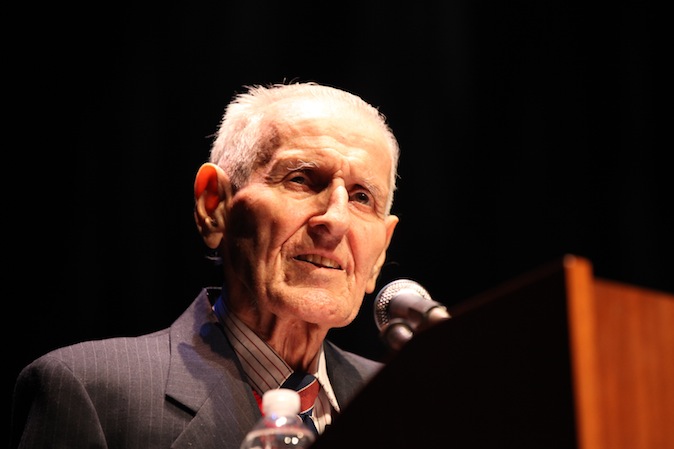 On a recent unusually warm Saturday night, UCLA’s Royce Hall was packed to the brim with an anxious audience, waiting to catch even just a glimpse of right to die activist, painter and pathologist Jack Kevorkian.
And as the hoards of eager fans – many of them Armenian – piled into the sold out show, Kevorkian opened up the night in typical Dr. Death fashion.

“I wonder if there’s ever been an ex-con speaking from this lectern,” he announced, much to the chagrin of the crowd.

While Kevorkian, whose HBO biopic “You Don’t Know Jack” earned Al Pacino a Golden Globe, has gained worldwide notoriety for his euthanasia practice and championing the rights of patients, for Armenian-Americans, it was a night to finally welcome him with open arms as one of their own.

Speaking from the stage,  the 83-year-old offered views on not only life, death and what happens after the latter but also participated in a discussion about civil rights, prison, his ethnic roots and commentary about Armenia, its government and worldwide diaspora, whose most important tool he said, was the Armenian language.

Over the course of a month, the Facebook invitation to the event spread throughout Armenian circles in Los Angeles and beyond and saw over 2,300 people RSVP – more than Royce Hall and the number of tickets available, were able to accommodate. Days and hours before the event, frantic fans posted messages asking for tickets from possible resellers.

But for those lucky enough to attend, the night which was organized by the UCLA Armenian Student Association and Armenian American Medical Society of California, consisted of a one hour lecture followed by a question and answer session moderated by former Foreign Minister of Armenia, Raffi Hovanissian and Kevorkian’s attorney and good friend, Mayer Morganroth.

Wearing one of his signature vests in red, a departure from the usual baby blue ensemble he’s known for, Kevorkian spoke of the little respect he has for the law but not before expressing his affection for the Armenian name “Vigen.”

In addition to referencing thinkers like Gore Vidal, Ayn Rand and Mark Twain, he touched heavily on the 9th amendment to the Constitution of the United States, once called “The Silent Amendment,”  which acknowledges that there are rights that people have not listed in the Constitution, rights that naturally belong to humans that are still protected. Kevorkian asserted that every one is born with every conceivable right, regardless of law.

“All a law does is block your exercise of a right,” he said.

This isn’t the first time Kevorkian has spoken about the 9th amendment. In an interview with the New York Times’ Monica Davey in 2007, right after he was released from prison, he spoke of his plans to educate the public about it. He even wrote a downloadable book on the topic while in prison, “Amendment IX: Our Cornucopia of Rights.”

The 9th amendment provided a segue to turn his attention to Armenia, where he advocated that the country should adopt it into their own code.

“Armenia has a unique opportunity to lead the world by putting into its constitution the 9th amendment and making it active,” he said. “But you’ve got to avoid corruption, which I think is a problem there.”

The crowd then erupted in applause. He called on Armenians to come to terms with the reality of their global position and also stressed that the country needed more activists.

“Let Armenians get realistic, we’re a small country, we don’t matter much in the world today,” he said. Kevorkian’s family past mirrors that of many Armenian Diasporans – his parents escaped the massacres leading up to the Armenian Genocide, however he did grow up with a father who wasn’t political nor religious, which he says allowed him to think independently for himself.

Moving on to the eight years and two months he spent in prison on a second degree murder conviction, the self-described “freest man in the country” said fear wasn’t something he felt while he was locked up.

“Most of the guards and inmates were for me, except the Catholic guards,” he said, adding that the worst part about the experience was “the snoring” and the “windows during winter.”

During the question and answer session, more than 50 people, including a bevy of students studying one form of medicine or another, lined up to ask Kevorkian questions mostly related to his euthanasia work. He held steadfast to the beliefs that have made him famous worldwide.

“I did what a doctor should do, period,” he said, also asserting that family doesn’t have anything to do with a patient’s decision to die.

Questions about his career in the arts also popped up.

He called his artwork “an honest look at life” and said he even painted the frames of them with his own blood. His jazz album, “A Very Still Life” was released just two years before he began serving his sentence, during which his music skills atrophied, he says. Tracks from the album were played while people shuffled into the hall.

Much to the disappointment of the long line of attendees waiting for a chance at the mic, the event came to an end, but not before  Kevorkian signed off the with a dose of his dry wit.

“What do you think happens after death,” a young woman asked.

“You stink,” he replied. 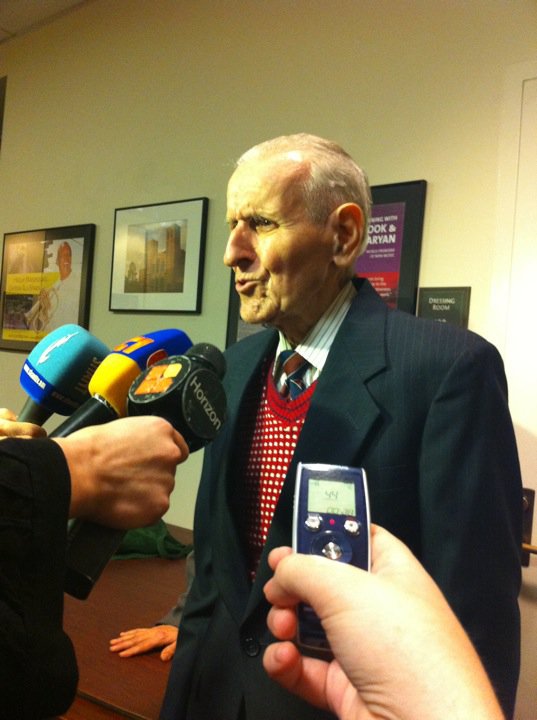 Later at an impromptu press conference backstage, a small group of Armenian media including ianyanmag, gathered to ask Kevorkian a few questions.

After sounding off a few Armenian words for the cameras, Kevorkian was asked if he would ever like to go to Armenia and lecture there. He didn’t seem opposed to the possibility, but didn’t feel he would have much impact, either.

“What good would it do?” he said. “You can’t fight the church, although Armenians hang on to it like it’s the last anchor they have, they don’t. Your language is your last anchor, it’s the only thing you have that’s Armenian.”

In fact, Kevorkian was en route to Armenia several months ago, when a mix up in Paris caused his name to be absent from the passenger list, according to Morganroth.
“It was quite an ordeal because Jack is incapacitated to a large extent, he has problems with his legs and to go over there and not to be able to get there was a big disappointment.”

Asked what inspired him in his life, his reply was simple: Free thinking for yourself.

“You can’t be religious and think freely,” he said, perhaps presenting a conundrum for at least a portion of Armenians, who pride themselves with the fact that they come from the first Christian nation in the world. “I don’t want a der hyre or a pope or a catholicos thinking for me, because in this world, he’s often wrong.”

Asked by this reporter what message he had for the Armenian Diaspora, he spoke passionately about the importance of learning the language.

“Every Armenian home ought to have an Armenian newspaper every day, whether you can read it or not,” he said. “I remember growing up, I saw the “Hyrenik Amsagir” [Fatherland Monthly] – that was home for me.”

“Your company, your country, politics – everything is artificial, it’s not Armenian,” he said. “You have tradition which you can enjoy with your language, but it doesn’t matter to young people, they’re easily fooled by propaganda, they see the Kardashians making tons of money degrading people and they think that’s the thing to do.”

As for the future, Kevorkian said he didn’t have much else to accomplish, but was more or less waiting to die with his growing age.

“I’m not afraid, but I’m concerned,”he said. “You hate to leave it, because I can still move, and think and do things, so you want to keep going.”