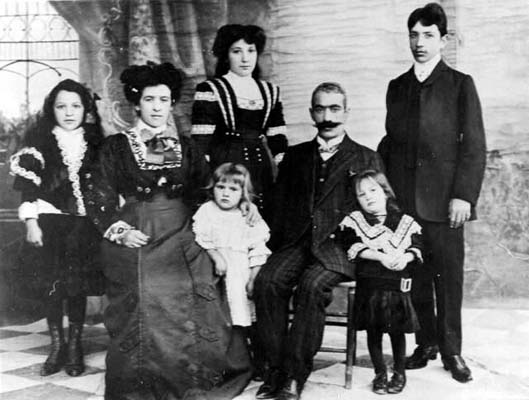 The palm trees were swaying gently when the sounds came crashing down on them. There was a bang, a slam and an endless cacophony of emotionally charged jargon in a foreign language that filled the night; bursts of anger that illuminated the starless sky.

Except it was in a foreign language that I understood, and in a stupor, I climbed out of bed at 3 a.m. to understand what the trouble was with the Armenian neighbors I had come so fondly to know by the volume of their arguments and the depth of their insults.

I peered out the window and saw the scene unfold – a fight between a mother and her son so volatile, that even with nowhere else to go, she had left her apartment in nothing but her faded pink robe and bags under her eyes. Her son, a 30-something unemployed young man with a penchant for yelling in Russian and slamming the door as often as he could,  didn’t bother to follow.

But an upstairs neighbor, a sort of phantom peacemaker who was friends with the family,  intervened. He ran after her down a flight of stairs, through a gate and out to the dilapidated sidewalk littered with cigarette butts and empty soft drink cups from fast food chains, to coax her to come back. Back at the entrance of the apartment, a neighbor viciously yelled at the son in Armenian – words that came out so fast that I could barely understand.

I couldn’t tear myself away from the window.

In the weeks prior, it was uncommon to see more than a few days go by without hearing him slam his fists on the counter, her yelling in the background and like clockwork, a slamming of the door that left half of the building vibrating.

I often wondered if it would escalate further.

The peacemaker, an Armenian man with lines on his face that outlined his life like the rings of a tree trunk, reappeared with the mother, whom he led back into the cramped space she was sharing with her son. The night fell quiet and the palm trees resumed their dance.

Three nights later, more yelling. Like a magnet I floated to the window. The rumbling grew and turned into screams. The screams turned into a million little pieces of glass on their tiny kitchen floor. The glass turned into rage, shoving, pushing and then came the confession from a poison-tainted male voice:

I reached for my phone and began to press numbers between the screams.

I looked up and my eyes met another neighbor, who had stuck her head out the window, trying to understand what was going on.

In between the commotion, I  debated whether to dial. What would I say? Was I just going to complicate things in this already complicated family by involving officials? Was I exaggerating the extent of the argument? Or was this a classic case of domestic violence? They do this all the time, I thought – a young man living with his mother and grandparents, there’s bound to be disagreements. Would having the police show up at their door embarrass them? Would my intervention have made things worse?

A few minutes passed and silence filled the air again. The door opened, the son darted out, lit a cigarette and disappeared into the night. The mother clutched her bruised forehead, took a breath and began to clean up the broken glass.

I felt frozen in time. I wondered about their lives, about how helpless they both felt – crammed into an apartment in East Hollywood, the son contemplating what to do with his life, the mother thinking if the move to start a new one in Los Angeles was worth all the trouble. I wondered how they provoked each other – one no less guilty of pushing buttons than the other.  I wondered about how they would probably never seek help, much less know where to find it. I wondered if they would be still living together, fighting together in 10 years. I wondered if they wondered about “The American Dream,” about if they ever thought of going back to Armenia, about if they ever missed it.

I never ended up calling.

The next day, an ambulance wailed down the street and parked in front of their complex. My heart sank. I took my spot at the window. The line of burly paramedics crowded into the apartment and took away the grandmother on a stretcher, oxygen mask and all. She didn’t want to go, but they insisted.

I felt a rush of guilt, followed by relief. Would my call, my involvement have prevented this? Was yesterday’s fight and this emergency a cause and effect? Did it matter? In the days that followed, I tried as hard as I could to push this family out of my head, but they wouldn’t go away.

“I’m going to kill you,” I kept hearing.

A few weeks later, the body of an Armenian woman was found on a Glendale freeway. She had been shot and pushed out of the car, allegedly by her cousin, who was discovered in his vehicle with a self-inflicted gunshot wound, taken to the hospital, and charged with murder. My thoughts went back to my neighbors. I replaced the cousins with the son and the mom. It was too raw. I wrote briefly about “amot (shame), the five stages of grief and the greater need for mental health services for Armenians and immigrants in general.

I came across a conference called “The Status of Armenians Living in the United States” that took place 5 years ago in Los Angeles . Lisa Arslanian, a psychologist spoke about how Armenians shy away from therapy, because of the discomfort associated with it:

“Aside from lack of familiarity with therapy, ‘what will people say?’ is a deterrent to seeking relief. Ugly secrets are kept within the family, in order to present a pristine image to the external world.

This scenario isn’t too far off in Armenia, where high needs for mental health services are met with low demands.

I left my neighbors soon after, never knowing how the saga of their lives continued or ended. I will most likely never see them again.  I will think about the mother and son, breaking the glasses they should be drinking tea in together, instead. I will think about how many times this scenario must be played out, behind closed doors, in the Armenian houses across the diaspora and how likely it is that nothing will ever be done about out of shame, out of embarrassment and out of honest ignorance. I will think about my own hesitation to intervene, a call I never made that day and if it could have made any difference for a complicated issue, so terribly in need of addressing, that law enforcement can’t begin to solve alone.