By Contributor October 4, 2009 in Diaspora 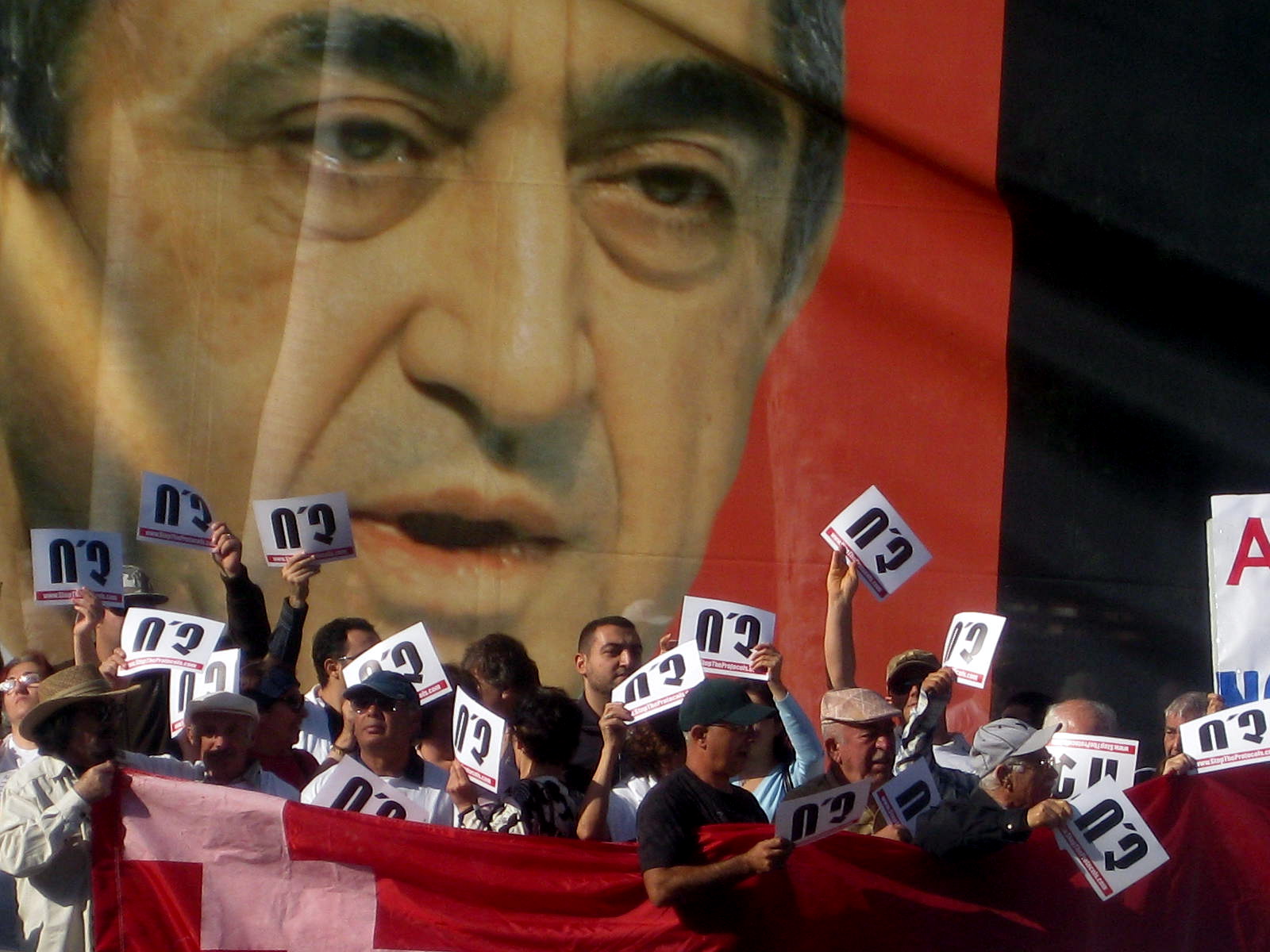 An Armenian crowd of thousands covering three blocks of Wilshire Blvd. protested against the Armenia-Turkey protocols on Sunday, Oct. 4, 2009, as Armenian President Serzh Sargsyan met with notable members of the Armenian diaspora at the Beverly Hilton for a gala banquet to discuss and receive feedback about the protocols. The protest, organized by the “Stop the Protocols” campaign drew Armenians from all over Los Angeles, many who were bussed in from various locations.

With screen printed t-shirts bearing the phrases “Stop the Protocols” and “The World Demands Turkey to Recognize the Armenian Genocide Now” and homemade signs that read “No Concession Without Reparation” and “Armenia is Not For Sale,” the crowd addressed Sargysan directly and continually called out “traitor” and “shame on you Sargsyan, we want a free Armenia” in Armenian.

“He’s here trying to convince the diaspora that these protocols are good for Armenia, whereas our stance is that we want peace and normalization with Turkey, but we don’t want it at the cost of selling our historical rights and rights to our land, and that’s what these protocols are doing,” Armenian Youth Federation (AYF) chairman Arek Santikian said. Santikian, who expected a crowd of 2,000 to 3,000 protesters expressed hope that the organized protests could affect the outcome of the protocols, which are expected to be signed by Armenia and Turkey as soon as Oct.10.

“The Armenian diaspora  feels very much a part of Armenia, and we don’t agree with these protocols and we want him to take that into consideration,” he said.

The protest in Los Angeles, which houses the second largest number of Armenians outside of Armenia, came on the heels of Sargsyan’s visit to diaspora communities in New York and Paris as part of a week long diaspora tour.

“We, Armenia and the diaspora, are one family. I simply want to speak to our brothers and sisters in the diaspora, hear their views and – why not? – consult them,” said Sargsyan in response to question posed by the editors of the Armenian Reporter that is posted on his official site.

Sargsyan has met with strong opposition in both New York and Paris, where crowds clashed with French police. The atmosphere wasn’t any different in Los Angeles, where many, like Zaruhi Najarian echoed Santikian’s sentiments.

“The president is obviously here to get the diaspora’s opinion and we’re hoping that he will take our opinion into consideration and not sign the protocols,”  Najarian, who expected to be at the protest until 8 p.m. said.

As the crowd tripled in size in a matter of hours, groups of young protesters were divided into teams in the Armenian flag colors of red, blue and orange and dispersed throughout Wilshire Blvd. U-haul trucks with “Don’t Betray Us” written in Armenian and the faces of Sargsyan and Turkish President Abdullah Gül plastered across them drove up and down the street. Armenian flags were waved in the air while a poster of Sargsyan opponents who were imprisoned following the aftermath of the violent crackdown on March 1, 2008 was strung up on a pole. 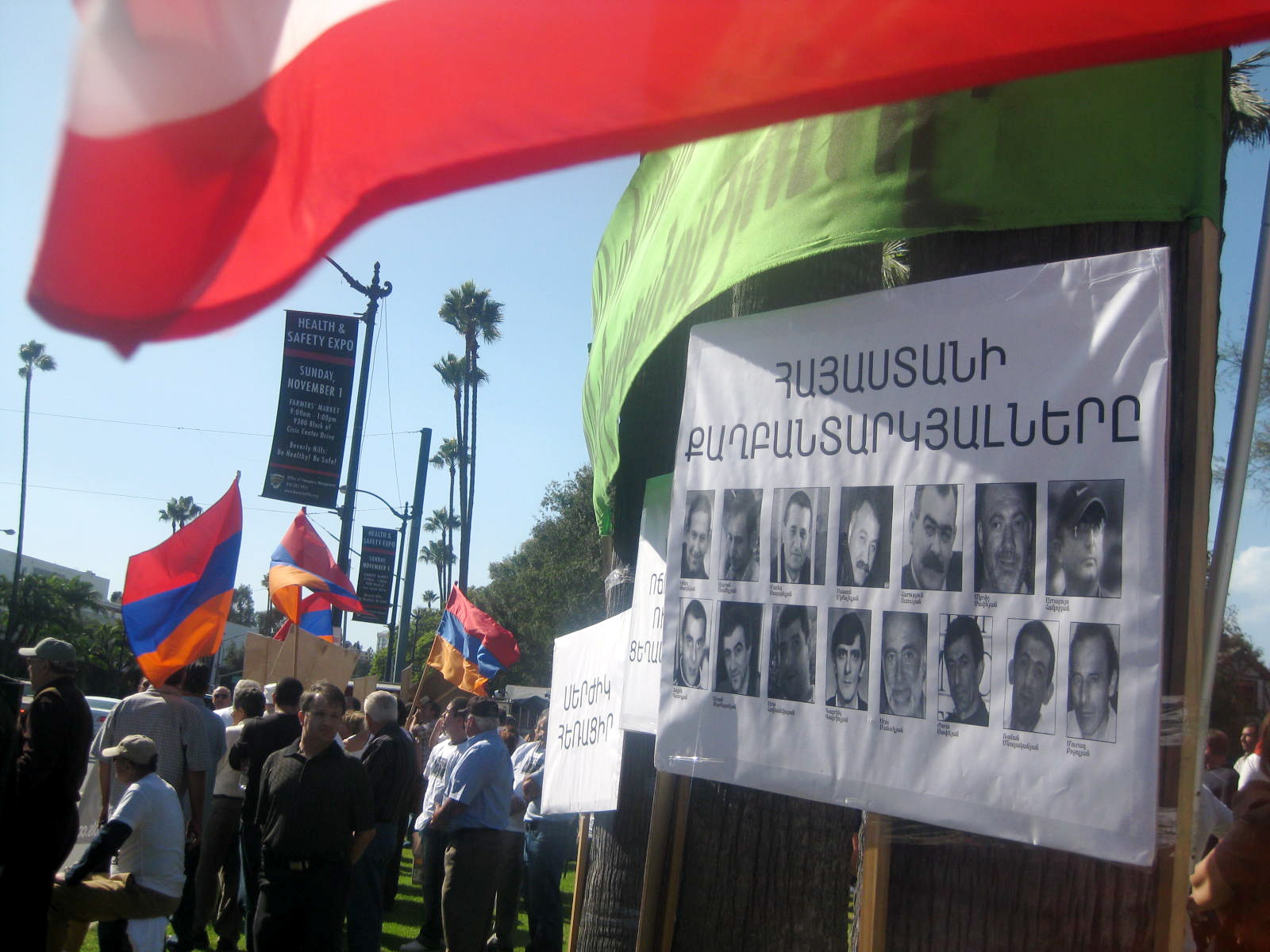 At the end of the block, the “Hye Riders” motorcycle club clad in their signature leather jackets bearing the Armenian crest observed the crowd.

“We’re against what’s going on with Armenia and the President,” Hye Riders president and founder Berdj Kasbarian said, adding that he would not want an agreement under any conditions.”I don’t give up any lands,” he said. Kasbarian, who started the Hye Riders club in 1999 was hopeful that protests would stop Sargsyan from signing the protocols and was proud of the turnout.

“I see a lot of Armenians with different backgrounds and that makes me very happy,” he said. 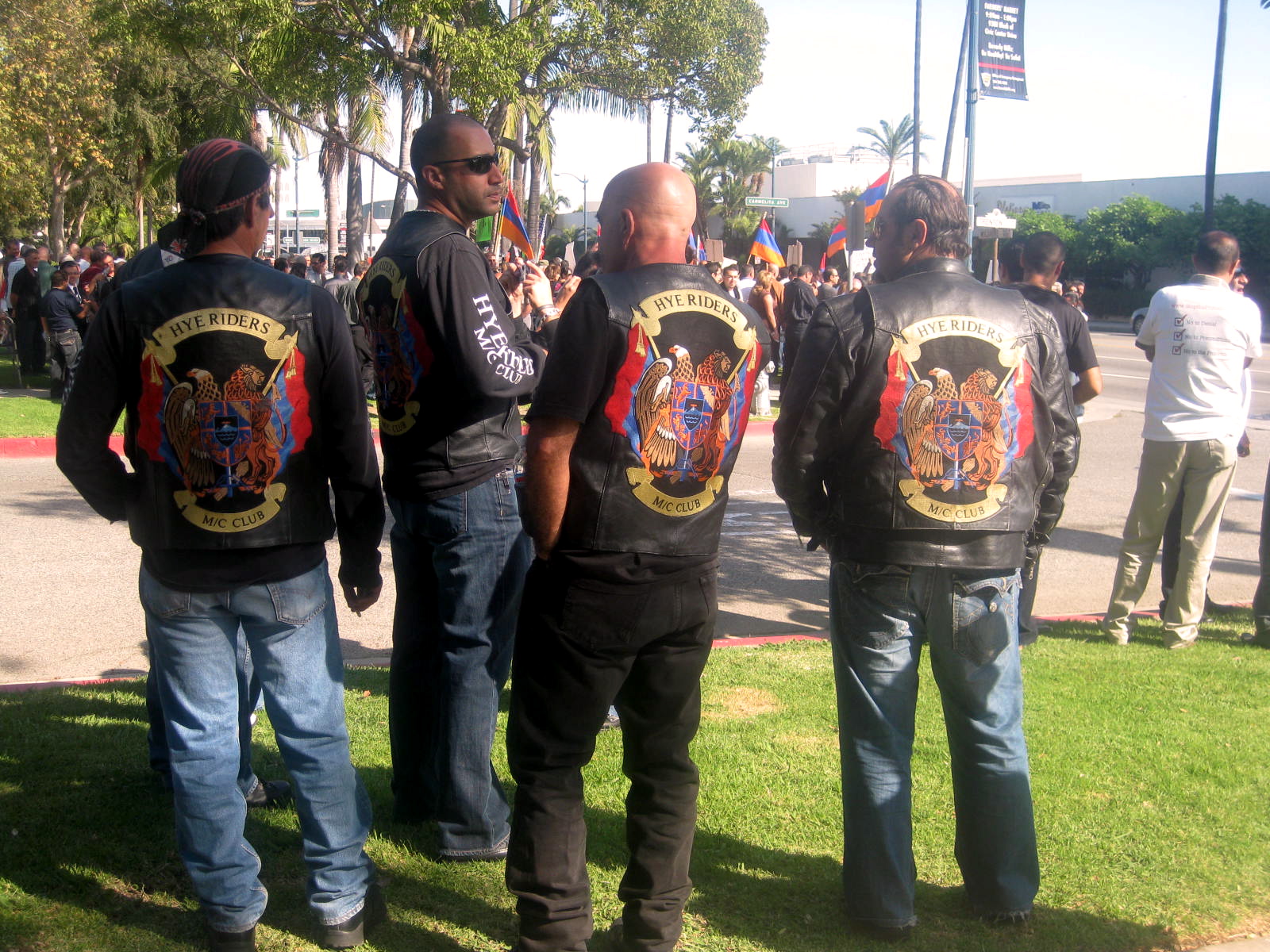 As protest organizers on loud speakers shouted “Armenians united, will never be divided,” Aleek Sherikian, dressed in a “Stop the Protocols” t-shirt expected to be protesting until 12 a.m.

“The future of Armenia is in question right now,” she said. “Economically, we are not doing well, and I believe this will make it worse.”

Sherikian also said she preferred that Sargsyan resign from his position and be replaced with someone who can handle the protocols more favorably. 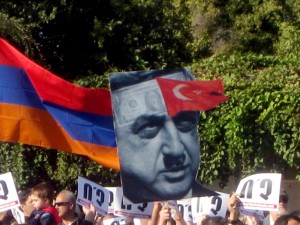 Vic Sarian, who was crossing the street to the Beverly Hilton in order to get a better view of the large crowd and take photos would like to see the post of the president scraped all together.

“I want Armenia to have a king,” Sarian said in Armenian. “Because if we have a president, he will trick us again. Armenians are a very tricky culture, therefore only a king can save us. I’ve come here today to say I don’t want a president, I want a king, no matter who it is.”

Sarian said he feels a king would solve the problem of corrupt politicians.

Some who observed the crowd from across the street grew visibly upset at the constant cries of “traitors” with accompanying posters, as well as a doll fashioned in the likeness of Sargsyan, which was being continually hit with a sandal.

“Turks wouldn’t do such things, because they still know how to respect their leaders,” said Lila, an older woman who has been living in Los Angeles for around 25 years and declined to give her last name. “They can show [Sargsyan’s] faults, but not accuse people of being traitors,” she said in Armenian.

Lila, whose parents are from Van, discredited the nationalistic fervor of the crowd. “My dad was a Revolutionary and these people are not acting like real Revolutionaries. What is the meaning of calling someone a traitor?”

“These are political matters that not everyone is equipped to deal with” she said, adding that she was disappointed with the tactics of the crowd.

As the sun set, the large and visibly angry crowd rushed towards the hotel but were barricaded by police. The Armenian National Anthem was also sung and hundreds stayed behind after dark for a candlelight vigil to honor victims of the Armenian Genocide.

Many who were present made use of social media by tweeting about the event, including the Western chapter of AYF who posted photos, commentary and video of the day-long protests and Aram Hamparian, executive director of the Armenian National Committee who wrote “After Paris, NYC, and LA who will toast serj?”

“Sargsyan unable to defend his worthless protocols! Tell him how you feel! Lose your voice if you must, but don’t lose your rights!” wrote student Meline Vartabedian. 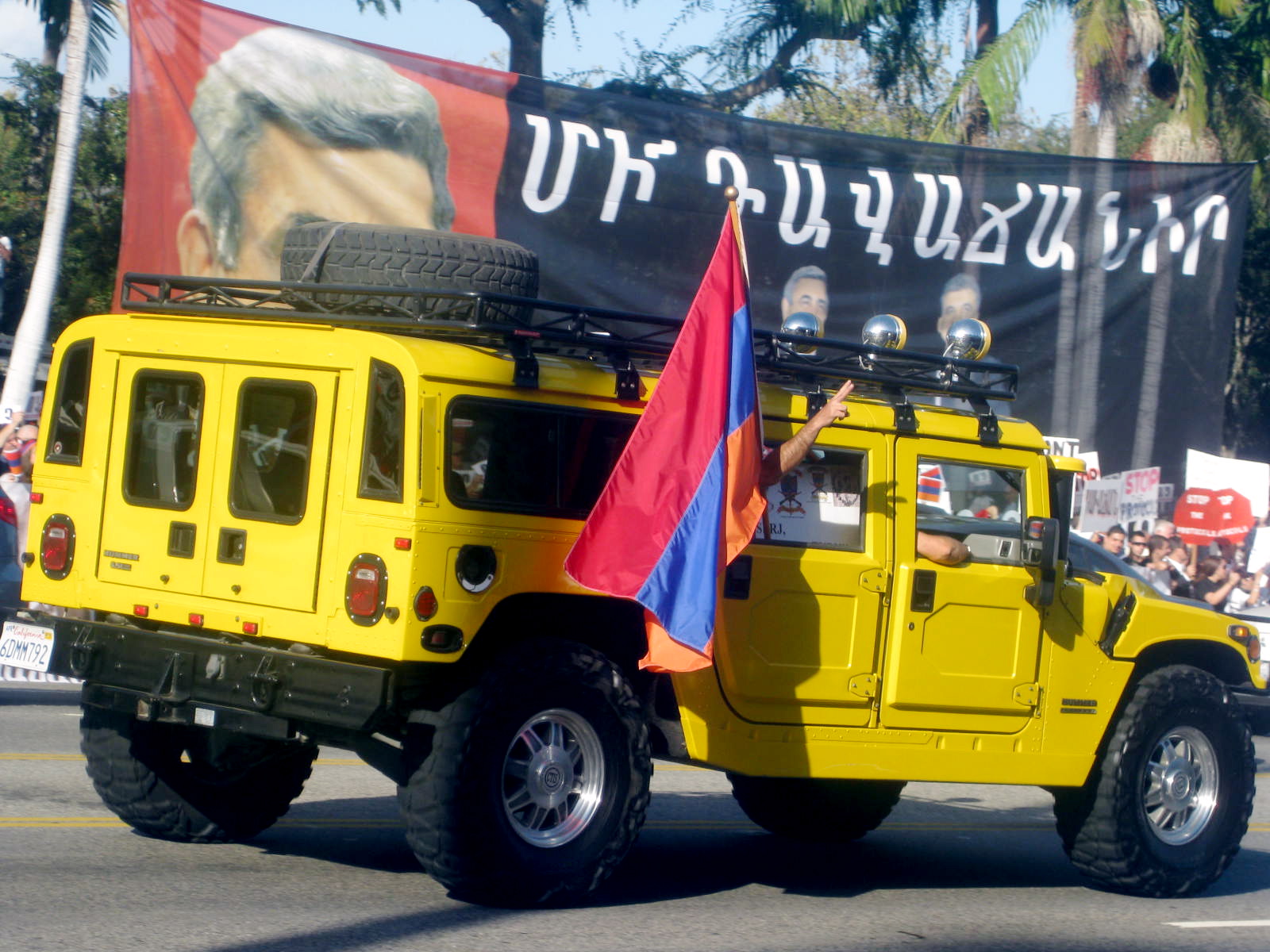 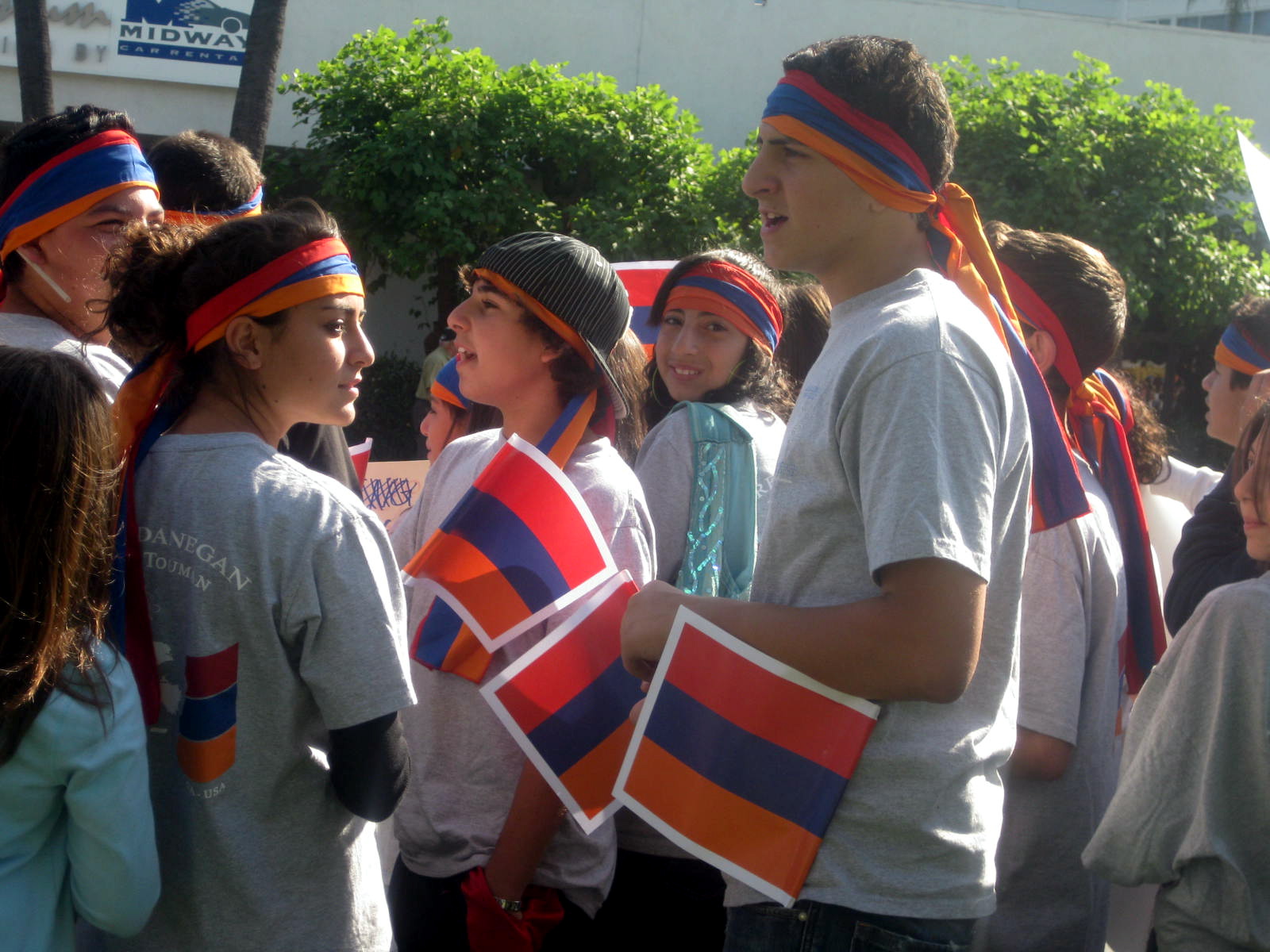 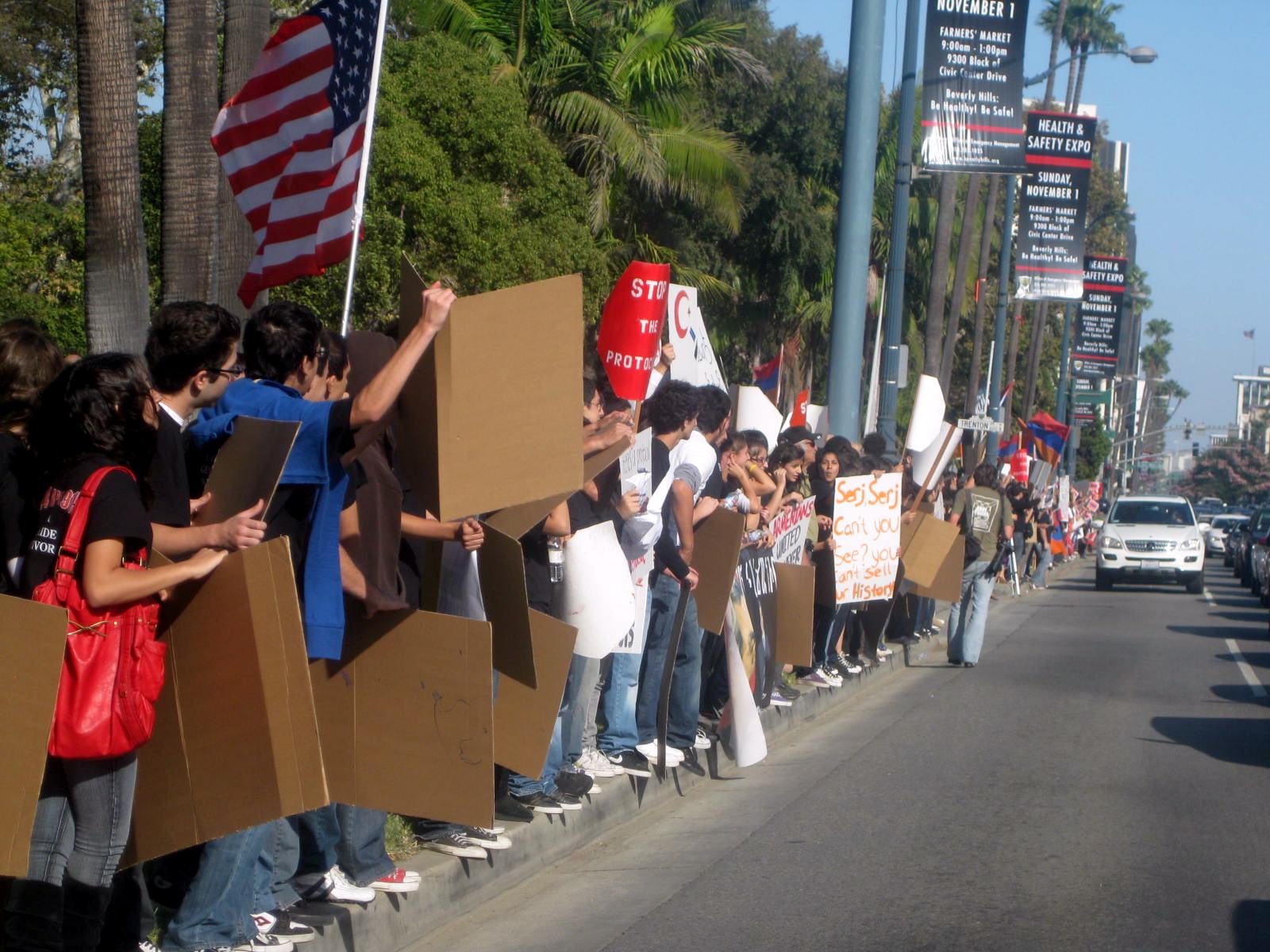 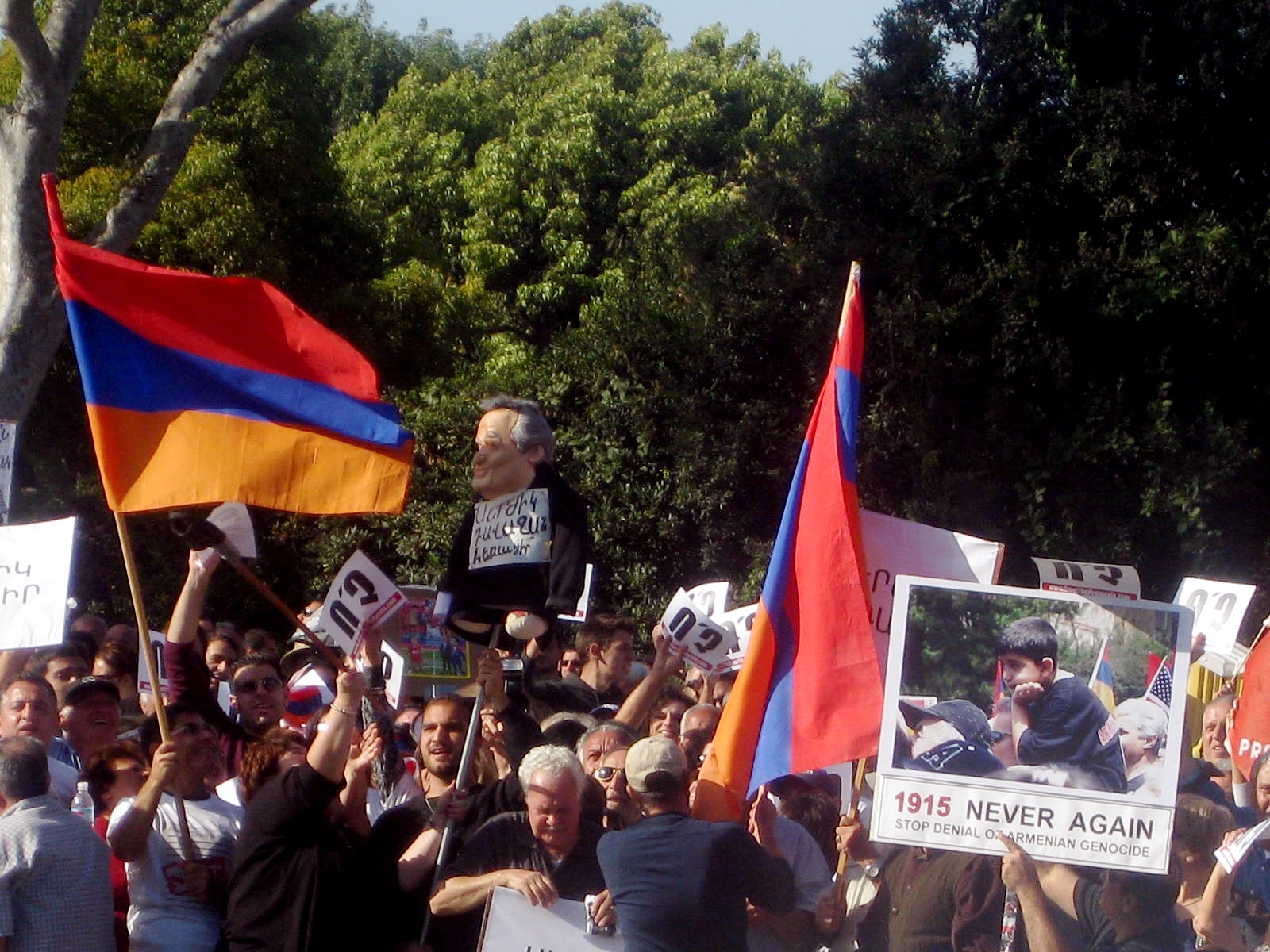 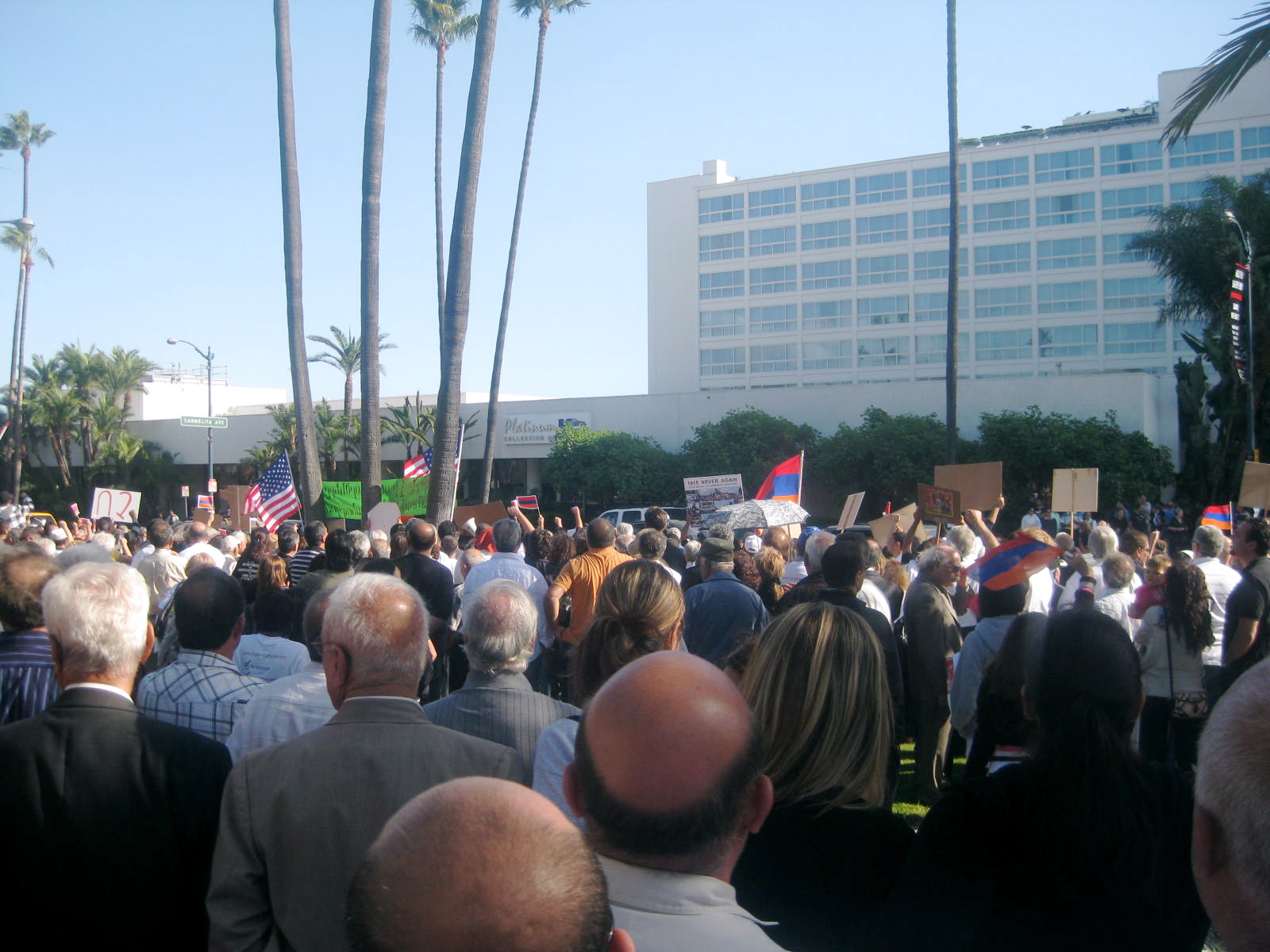